Sara Corning statue unveiled in Canada: “She Lived to Serve Others” 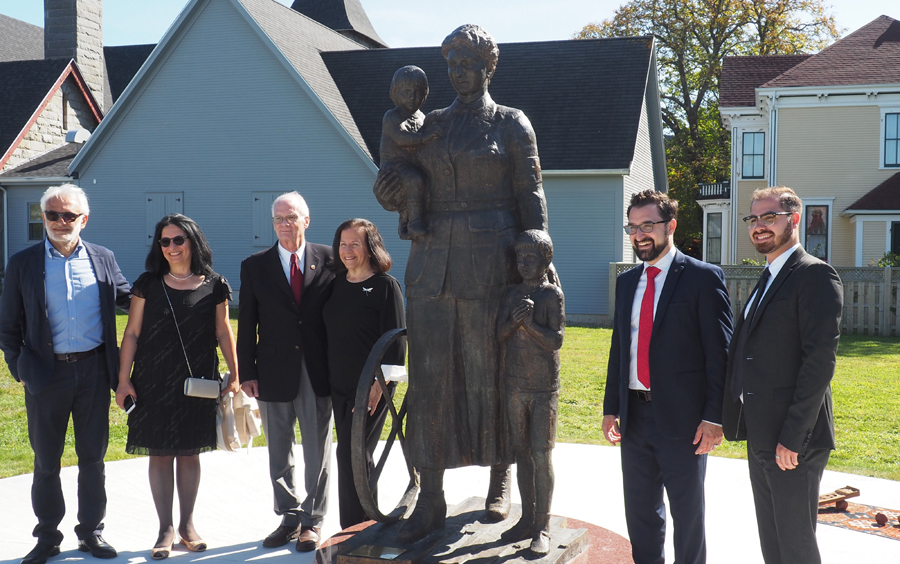 (NovaNews) – On land where once stood a cherished church that Sara Corning may have attended, a statue of her now stands.

The sculpture was unveiled on Sept. 14, on the Parade Street lawn of the Yarmouth County Museum where Zion United Baptist Church once stood.
A large crowd was present for the unveiling of this honour.

Jennifer Rodney-Chown referred to Sara Corning as a hero.

The Yarmouth County native, a nurse who lived from 1872-1969, is recognized for rescuing and caring for thousands of orphans during her 11 years of service in Armenia, Turkey and Greece between 1919 and 1930.

“She helped to heal the hearts of orphans and refuges, who needed a kind touch, medical treatment or encouragement,” said Rodney-Chown.
“Here in Yarmouth, her statue will be a healing touch at this spot.”

In previous events over the years where Corning has been spoken about, she’s been referred to as someone who never went about her life’s work seeking fame. Rather, she simply did her work to serve and help others.

But what the Yarmouth native accomplished and the thousands of people – mostly children – she helped is not to be forgotten.

And efforts have been underway for a long time to ensure she wasn’t – not elsewhere around the world, and particularly not in her home community.

Funding for the base of the bronze statue was donated by Dr. Barbara Keddy and it was created by Montreal sculptor Garen Bedrossian.

At the conclusion of remarks from guest speakers and a song from the Shantymen during the Sept. 14 event, there was a dramatic performance by Armenian contemporary performance dancers, after which children unveiled the statue.

The Sara Corning weekend activities started Friday, Sept. 13, at Yarmouth North Baptist Church with a dramatic reading of the original play ‘Memories of Sara Corning’, written by Chris Bolger of Yarmouth and performed by Martha Irving of LunaSea Theatre Company in Halifax.

On Sunday, Sept. 15, the Yarmouth Art Society’s Tribute to Sara Corning was held at the Waterfront Gallery. The show will be mounted until the end of September.

Corning, born in Cheggogin, Yarmouth County, in 1872, was a nurse and eventually worked with the American Red Cross. She joined the Near East Relief effort to aid refugees in 1919 and is credited with helping to save and care for thousands of Greek, Armenian and Assyrian orphans and refugees from the aftermath of World War One and the Siege of Smyrna in 1922. She continued her work with orphans in Greece and Turkey until 1930.

Toronto, as mentioned, is home to the Sara Corning Centre for Genocide Education. The centre’s mission is to disseminate human rights and genocide-related research to elementary and secondary school students in Ontario.

“The Corning Centre’s conviction is that human rights education is effective in ensuring that Canadian students become engaged in civic life, advocate for their own rights and those of others, and remain aware of the consequences of discrimination,” reads the mission statement on the centre’s website.

Corning was also posthumously awarded the Outstanding Canadian Award by the Armenian Community Centre of Toronto in the fall of 2017.

The Sara Corning Society in Nova Scotia has worked diligently to ensure Corning’s life and humanitarian work is remembered and honoured. A street – Sara Corning Way – was named after her in Yarmouth.
This statue was further seen as a continued fitting way to honour the Yarmouth heroine.

Corning had returned to Chegoggin, Yarmouth County, in her retirement, where she lived until her death in 1969 at the age of 97.
Her headstone is inscribed with the words “She Lived to Serve Others.”