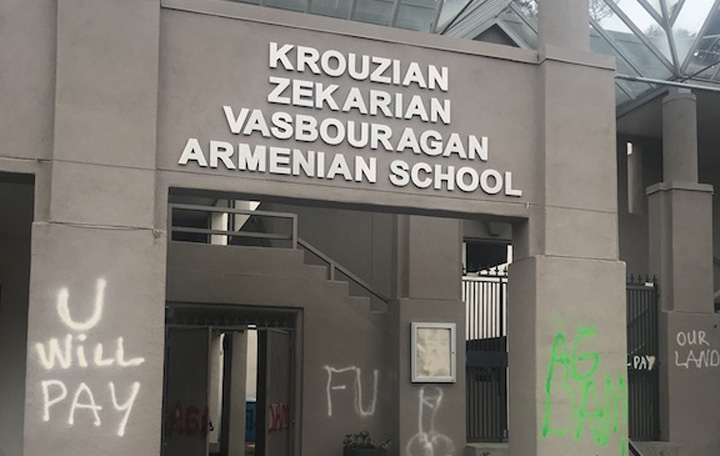 The Krouzian-Zekarian Armenian School and its adjacent Armenian Community Center in San Francisco were vandalized overnight, with what appears to be Azerbaijani-centric graffiti plastered all over the exterior walls of the building.

Community and school officials, among them the Armenian Revolutionary Federation Kristapor Gomideh leadership are on site assessing the damage.

The San Francisco Police Department in investigating the incident. The Armenian National Committee of America-San Francisco Bay Area chapter leaders and members have been working with law enforcement, as well as local and state officials to advance the matter.

In a statement on Friday, the ANCA–Western Region condemned “in the strongest possible terms the racially-motivated Armenophobic vandalism that took place on July 24 against the Krouzian-Zekarian-Vasbouragan bilingual Armenian School in San Francisco.”

This hate crime follows a pattern of racially-motivated attacks against Armenians, including the mob attacks against Armenians by Azerbaijanis in Russia, an arson attack on an Armenian embassy vehicle in Germany, and the deliberate burning down of an Armenian business in Ukraine. A similar incident involving racially charged anti-Armenian vandalism of Armenian schools in Los Angeles took place last year, forcing these schools to be on high alert to closely monitor the situation.

“We call on the governments of Azerbaijan and Turkey to immediately cease their state-sponsored and instigated campaigns of toxic Armenophobia. We further call on the international community – ranging from national governments to nonprofits alike – to decry this global assault campaign against Armenians and call for an immediate cessation of provocations. Finally, we call upon our community to stay vigilant against any suspicious activity, immediately report such activity to law enforcement, and refrain from giving in to any provocation,” said the ANCA-WR.

This latest attack targeting an institution of learning comes days after a protest against Azerbaijan’s aggression in Los Angeles  saw Azerbaijani counter-protesters instigate violence against peaceful Armenian protesters by physically assaulting them and using hate symbols including the salute of the Grey Wolves – a Turkish hate-group that openly espouses the eradication of the Armenian people and incites violence against Armenians internationally, with their salute seen by Armenians worldwide as the equivalent of the Nazi salute.

Armenia’s Consulate General in Los Angeles also “strongly condemned” the vandalism in San Francisco. Earlier this week, in condemning the violence at the L.A. protest, the Consulate called it an “orchestrated” effort by the Azerbaijani state.

“Azerbaijani graffiti was plastered all over the exterior walls of the building. The vandalism at educational institution testifies toward the fact that the Armenian community of California has become a victim of a hate crime apparently organized by the Azerbaijanis,” said the Armenian Consulate’s in its statement on Friday.

San Francisco District Attorney Chesa Boudin took to Twitter to express his outrage about the incident.

“Someone vandalized the Armenian school/community center. I’m outraged. This is totally inconsistent with San Francisco values. It is also a CRIME,” said Boudin on Twitter Friday. “We are working with San Francisco Police Department to investigate. We stand with our Armenian brothers and sisters.”

Someone vandalized the Armenian school/community center. I’m outraged. This is totally inconsistent with San Francisco values. It is also a CRIME. We are working with @sfpd to investigate. We stand with our Armenian brothers and sisters.https://t.co/xUp2FYqGT4

This comes days after Azerbaijani’s instigated violence and attempted to disrupt a peaceful protest organized by the Armenian Youth Federation in front of the Azerbaijani Consulate in Los Angeles to condemn Azerbaijan’s brazen attacks on Armenia’s Tavush Province.

Hate acts against Armenians by Azerbaijanis have surged around the world. In Moscow, a group of Azerbaijani stumped on apricots from Armenia at a local open air market, and began displaying signs to not sell to Armenians. In Berlin, on Thursday, a car belonging to the Armenian Ambassador to Germany was set ablaze on Wednesday night.