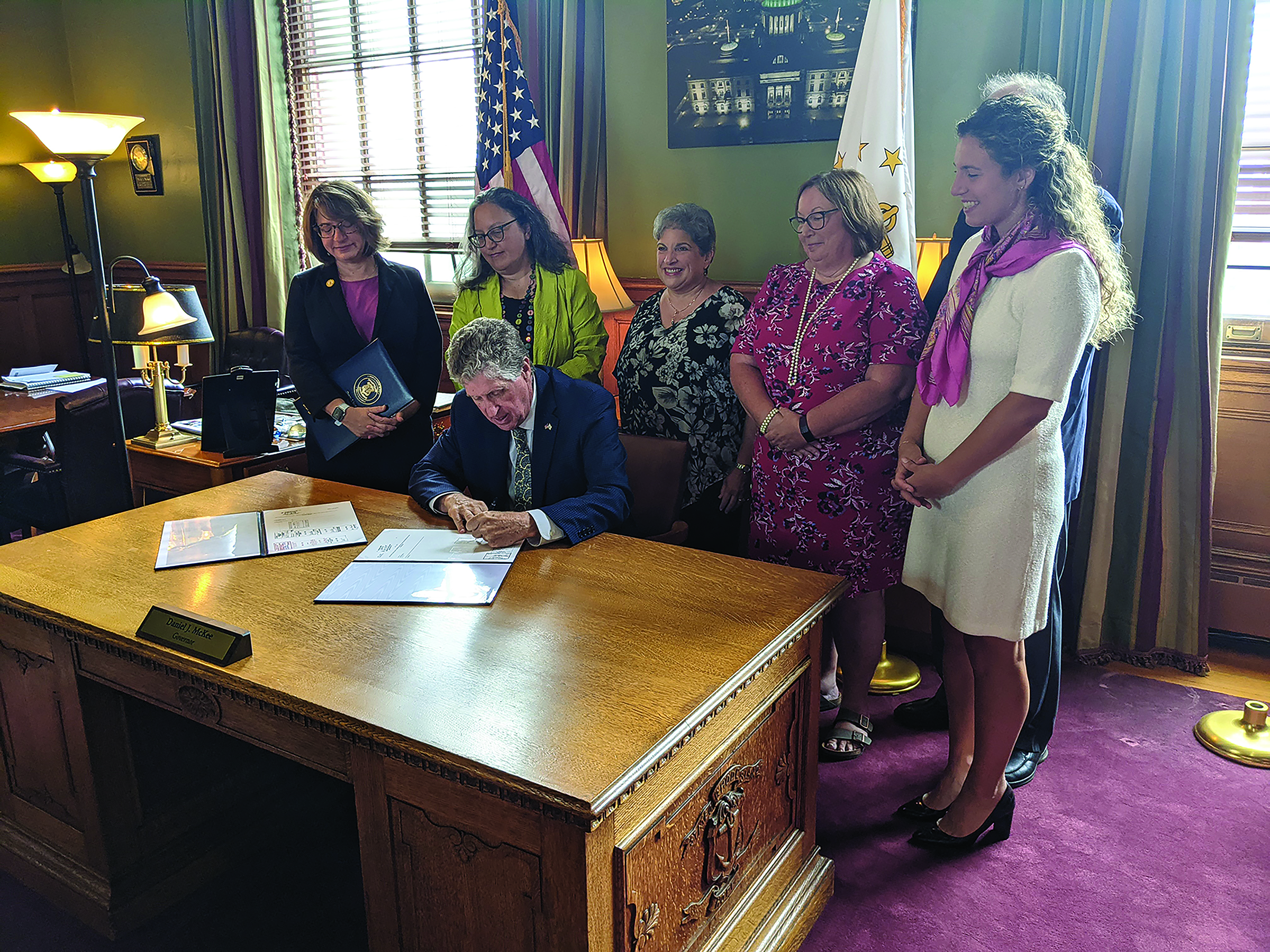 The signing followed a gathering of the current coalition celebrating passage of the law. Rep. Kislak stopped by to offer her congratulations last Thursday. “I learned a lot during this process, particularly about the organized campaign of denial,” she told attendees including ANC-RI representative Steve Elmasian. Rep. Kislak was referencing the strong opposition the measure faced from the Turkish lobby on both sides of the legislature. That opposition focused on inclusion of the Armenian Genocide in the bills and almost succeeded in stalling the process. But then the coalition members, the Armenian National Committee of RI (ANC-RI) and the RI Jewish Alliance stepped in, sending letters and emails and making phone calls to key decision-makers to ensure the measures passed from committee to full House and Senate votes. The advocates’ communications offered heartfelt, often personal, and professional educational explanations about the necessity of a state commission, ultimately persuading the House and Senate committees on education to move their respective bills to votes.

Key sponsors of the legislation offered public statements on the importance of establishing a state commission on Genocide and Holocaust education.

“As hate crimes have been rising in our own country over the last few years, it’s particularly important that students are taught about the catastrophic atrocities that have been committed when the seeds of hate are planted,” said Rep. Kazarian, who cosponsored this bill. All eight of her great-grandparents are survivors of the Armenian Genocide. “My family’s own history involving the Armenian Genocide has shown me that these events in history should never be forgotten. It is important that our children recognize and understand how such terrible events can occur in society, and more importantly, how to stop them from happening.”

“So many Rhode Islanders’ families are from communities that have been impacted by genocides,” said Rep. Kislak. “Listening to each other’s stories and learning about those diverse histories will help us see the humanity in one another and build stronger communities. This law will…raise awareness of genocides that have affected Rhode Islanders and have shaped our communities’ histories,” she concluded.

“Given the hate and bigotry that is common in public discourse today, it is especially important to educate students about the incredible damage that prejudice and intolerance have caused throughout history. The best way to ensure our future generations never repeat these actions is to teach them about the impact the Holocaust and other genocides have had in our world. Learning about our past provides perspective on current world events. It is also an opportunity for people to learn from one another about experiences of oppression,” said Sen. Goldin, whose grandparents fled eastern Europe to Canada during the pogroms. Those who were unable to escape died in either the pogroms or the Holocaust.

Sen. Thomas J. Paolino (R-Dist. 17, Lincoln, North Providence, North Smithfield), a cosponsor of the Senate legislation, also lost family in the Armenian Genocide. “My relatives have a keen understanding of how hate and bigotry can escalate to reverberate through generations,” said Sen. Paolino in a statement. “It is important that we educate society on the warning signs of genocide. Learning the history about these atrocities and how to prevent them will best protect our future.”

Current coalition chairman Cooper recognized the efforts of former state senator Aram Garabedian who introduced the initial legislation to create genocide curriculum materials, including the Armenian Genocide and the Holocaust and has worked tirelessly on genocide education efforts. In addition, Cooper pointed out that the 2016 law requiring the teaching of the subject in the state’s schools, along with the new law forming the commission, would not have been possible without the ongoing and persistent efforts of the sponsoring legislators and coalition partners. Those partners include the ANC-RI, Genocide Education Project, Sandra Bornstein Holocaust Center, Jewish Alliance of Greater Rhode Island, RI Board of Rabbis, RIDE and RI Commission on Prejudice and Bias, along with members of the Armenian, Jewish, Cambodian, African and Indigenous communities.

ANC-RI advocate and member of the current coalition Esther Kalajian believes the formation of a state commission legitimizes the curriculum that appears on the RI Department of Education (RIDE) website. “Through this established curriculum and the continued work of the commission, RI’s students will not only receive instruction on historical facts but also gain important skills to participate in civil discourse, appreciate diversity of thought and abide by inclusive principles,” said Kalajian.

Wahlberg, who taught a course about the Armenian Genocide, the Holocaust and other genocides at Cranston East High School, believes that the new commission should partner not only with school district administrations and school committees, but also with recognized organizations such as the US Holocaust Memorial Museum, the Genocide Education Project and the USC Shoah Foundation, among others, to provide quality resources for teachers to use in the classroom. “Providing teachers with the necessary tools in order to teach this difficult and often controversial history will ensure that the classroom curricula being presented to students is vetted and legitimate information,” said Wahlberg. Quoting philosopher and humanist George Santayana, she said that we learn history in order to not repeat history. “However, many of us are too aware of how Santayana’s words, as well as the mantra ‘never again’ have not been heeded, and we step into this quagmire again and again as the incidence of genocide continues across the globe,” she continued, saying that the newly-formed commission will ensure that we learn our history in order to ensure our future.

Len Newman, another coalition member, educator and child of Holocaust survivors for whom “the horrors and cruelties of war are among the lenses” through which he lives his life, has always fought for social justice. He feels that the new law creating the commission “is a further reflection of the commitment that Rhode Island has to educate its students and to social justice.”

Cooper went on to say that while the current coalition has done outstanding work, much more needs to be done that only a commission can oversee, including stronger accountability from schools and school districts relating to Holocaust and genocide education and a system of monitoring and assisting in ensuring school compliance with the 2016 law.

“This is about understanding what hate can produce,” said Cooper, continuing, “It is also about awareness and what can be done to stop atrocities currently happening and to create a civil understanding that will reduce the possibility of future genocides.” He was moved by President Joe Biden’s acknowledgment of the Armenian Genocide on April 24 this year, quoting, “Let us also turn our eyes to the future—toward the world that we wish to build for our children.”

Following the signing, Gov. McKee spent a few moments chatting with the current coalition members, outlining the next steps for formalizing the commission, which is effective immediately.