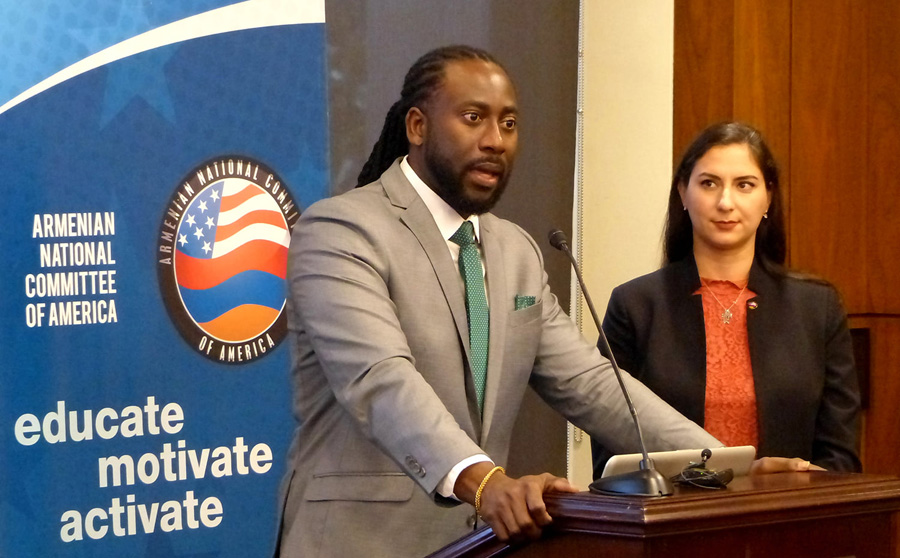 Genocide reparations expert Dr. Jermaine McCalpin stressed that Congressional passage of the Armenian Genocide Resolution (S.Res.150 and H.Res.296) represents a key to countering the denial of this crime, seeking reparations, and securing justice, during the second installment of the Armenian National Committee of America’s (ANCA) Raphael Lemkin Policy Series.

“I am honored to have had the opportunity to host the second lecture of the Raphael Lemkin Policy Series,” said Rep. Brad Sherman (D-CA), a senior member of the House Foreign Affairs Committee. “Dr. McCalpin led an excellent discussion on recognition and remembrance of the Armenian Genocide. We must pass H.Res.296 to ensure it is the policy of the United States to commemorate the Armenian Genocide through official recognition and remembrance.”

1)  It will send a message that the U.S. will honor its commitments to historical rectification, noting that passage is “ensuring that this type of recognition leads to decisive action.”
2)  It will remove the veil of diplomatic protection of denial by Turkey of the Genocide.
3)  It indicates U.S. global leadership in human rights demands and that initiates strategic actions and legislation
4)  Sends a clear message that contemporary imperatives should not over-ride the continuation of the Genocide
5)  History will judge us as having failed our antecedents by allowing them to be forgotten by virtue of not supporting Genocide recognition and by extension, reparations.

Dr. McCalpin made a powerful case for genocide reparations as a way to ensure that “the cloak of denial is removed.  Once reparations are granted, there is no hiding behind invention of history and selective recall by the Turkish state.  Reparations take power away from perpetrators and deniers and gives these powers to the victims, survivors and descendants.”  McCalpin also explained that reparations would help remediate victim identity and help “re-humanize” those who died and those who live on.  Finally, reparations also establish compensation, which, McCalpin and the Armenian Genocide Reparations Study Group envisioned as a “comprehensive package of repair […] focused on the return of confiscated and sequestered land, property and possessions taken from the Armenians in the committal of Genocide.”  Overall, argued McCalpin, “reparations provide the opportunity to honestly engage the past, making peace with the past, because it serves as a mechanism of atonement for the ‘sin of genocide.’”

In his remarks, McCalpin framed reparations in the larger question of transitional justice – seeking an answer to the question, “how do we deal with the past.”  McCalpin explained “Turkey has not asked or answered that question… Instead the past has been sanitized and, as Umit Ungor says, ‘they have organized oblivion – they have taken Armenia out of history altogether.’”  McCalpin argued that “Turkey is not ultimately a truly democratic society, one, because it has not reckoned with its past, and two because it is a polity enamored by repression and intimidation.  When we talk about democratization, we can’t expect to remove the blight of the Armenian Genocide.  We can’t get to justice and democratization without addressing this vexing problem. Turkey cannot proclaim democracy while denying its historical obligations to provide reparations.”

McCalpin cited a number of important lessons learned from the reparations for the Jewish Holocaust, including:

1)  Granting reparations for the genocide or killing of Jews means that while the tragedy still helps to shape Jewish identity, the remembrance focuses on the event rather than the injustice and ignominy of denial.
2)  Genocide cannot kill the memory of resilience of a motivated people.
3)  History reminds us that injustice and genocide knows no color, religion or economic status.  That is why we have to be motivated to help and to advocate for change and justice wherever we see injustice.

ANCA Government Affairs Director Tereza Yerimyan opened the program thanking Congressman Sherman and noting, “our aim, very simply, is to foster ongoing Capitol Hill conversations about the UN Genocide Convention – bringing new energy, insights, and inspiration to the work of our Congress in preventing and punishing this most terrible of all crimes,” said Yerimyan.  “Through the name of our lectures, we – of course – honor the life’s work of Raphael Lemkin, the Jewish lawyer from Poland, who both coined the word ‘genocide’ – specifically referencing the Armenian massacres – and then shepherded UN passage of this landmark treaty.”

Ambassador John Evans – who represented the United States in Armenia between 2004 and 2006, until his tenure was cut short by the White House over his truthful statements about the Armenian Genocide – participated in the discussion portion of the program, raising questions informed by his extensive first-hand experience in this area. Ambassador Evans is the author of “Truth Held Hostage,” which recounts his principled stand against Turkey’s attempts to enforce a gag-rule against honest U.S. remembrance of the Armenian Genocide. 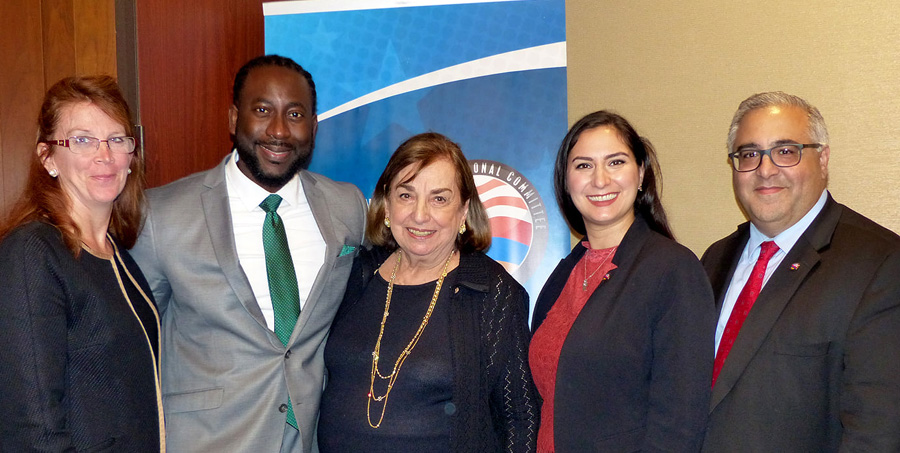