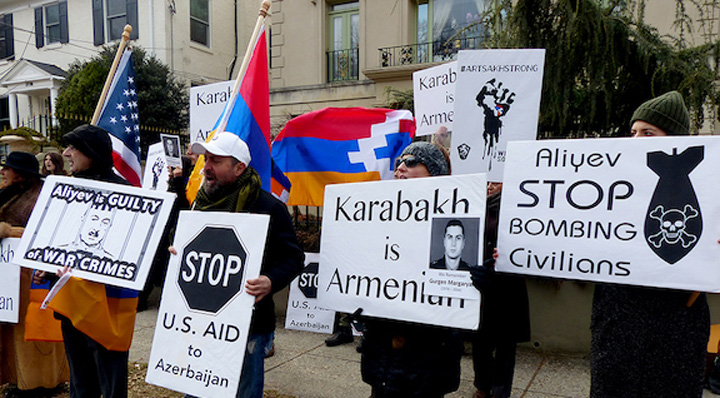 WASHINGTON—Greater Washington DC community members joined the Armenian Youth Federation at the Azerbaijani Embassy demanding justice for the Sumgait, Kirovabad, Baku and Maragha pogroms from 1988-1992, and raising their voices in support of freedom and security for the independent Republic of Artsakh.

“We join communities around the world in commemorating the massacres against the Armenian populations of Sumgait, Kirovabad, Baku, and Maragha and standing strong with the people of the independent Republic of Artsakh in their quest for a lasting peace,” said AYF-YOARF Washington D.C. “Ani” Chapter chairwoman Galin Tanashian. “Our protest today is part of ongoing political action – in Congress, in state capitols and local communities – to strengthen U.S. – Artsakh ties and ensure the long-term safety and security of the Republic.”

Holy Cross Armenian Church pastor Fr. Sarkis Aktavoukian leads a prayer in memory of the victims of the anti-Armenian pogroms in Sumgait, Kirovabad, Baku, and Maragha and all those who lost their lives in defense of Artsakh freedom.

This year’s protest also marked the 15th anniversary of the axe-murder and decapitation of 26-year-old Armenian serviceman Gurgen Margaryan, killed in his sleep on February 19, 2004, by Azerbaijani soldier Ramil Safarov during a NATO language-training exercise in Hungary. After serving only a fraction of his sentence in Hungary, Safarov was extradited to Azerbaijan in 2012, where he was immediately pardoned, promoted and praised by the Azerbaijani people and government. Today, Safarov is considered a national hero by his countrymen, while Armenians still mourn Margaryan’s murder.

Protesters expressed concern about increasing pressure on the Republics of Armenia and Artsakh to support the flawed Madrid Principles, which call for the surrender of lands for paper promises of a future “expression of will” which regarding the status of Artsakh.  Greater Washington DC Armenian community members were loud and clear in their message that the only pathway to long-term peace is one which respects the right to self-determination of the people of Artsakh. Children proudly waved Artsakh flags and held signs supporting our fellow Armenians who struggle every day to protect and defend the land.

Following the vigil, Fr. Sarkis Aktavoukian of Soorp Khatch Armenian Apostolic Church led the D.C. community members in prayer in memory of Gurgen Margaryan, the victims of the Baku, Sumgait, Kirovabad and Maragha massacres and all those who lost their lives during the Artsakh liberation movement.

AYFers teaching the next generation to lead community calls for justice during the protest demanding justice for the anti-Armenian pogroms in Sumgait, Kirovabad, Baku, and Maragha.

The protest was streamed live by the Voice of America Armenian Service as well as the AYF Ani chapter and ANCA Facebook pages and covered by H1 Television.

These pogroms set the stage for two decades of aggression by Azerbaijan, during which it launched and lost a war against Nagorno Karabakh, and later used its oil wealth to buy a massive military arsenal that its leaders, to this day, vow to use to renew their attempts to conquer a Christian people that has lived on these lands for thousands of years and, after great challenges, has flourished in freedom from Soviet oppression for more than 25 years.