Pashinyan Says Threats Will Not Work on Artsakh Peace 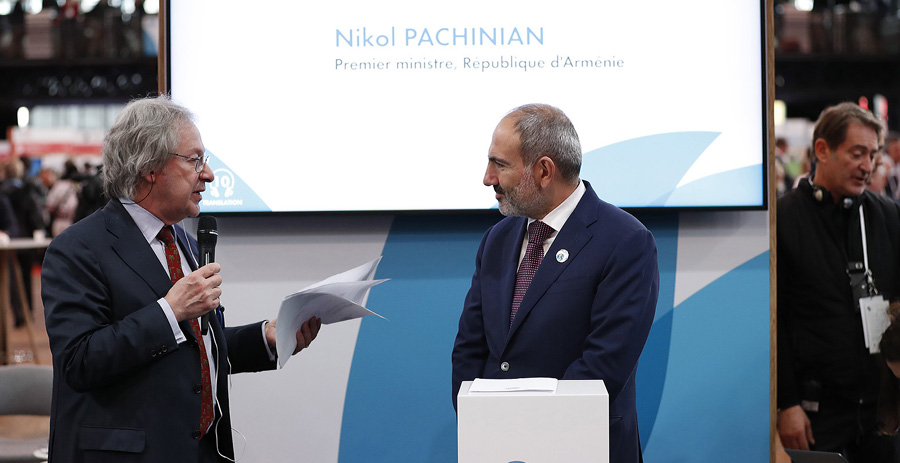 Prime Minister Nikol Pashinyan, who is in France to attend the Paris Peace Forum, on Tuesday participated in a “master class” during which he discussed the ongoing peace talks to resolve the Nagorno-Karabakh conflict and urged his Azerbaijani counterpart Ilham Aliyev to support his statement that any resolution to the conflict must be acceptable to the people of Armenia, Azerbaijan and Artsakh.

The “master class” was moderated by the Steven Erlanger, the chief diplomatic correspondent for Europe for The New York Times. In introducing Pashinyan, Erlanger said the his past as a journalist made the Armenian prime minister an interesting person for having served time in prison and later ascending as Armenia’s leader.

“This is a very unusual path,” said Erlanger. “I am a former reporter of Moscow and have been in your country. I want to thank you for being here.”

Before responding to Erlanger’s questions, as well as fielding questions from the audience, Pashinyan made a statement regarding the history of the Karabakh conflict, which is presented below.

What I would like you to know about is the security environment of our country? I have to record a strange fact – 2 of our 4 borders are closed, the other two can be assessed as half-closed. Why do I say half-closed? Because in the south we share border with Iran and as you know there are some tensions over Iran, and we have border with Georgia in the north and the tense relations between Georgia and Russia have some negative impact.

And there is also another very interesting fact. Those interested in Nagorno-Karabakh conflict should know the roots of this conflict. First of all the reason was the decision made by Stalin regime by which Karabakh was given to newly established Soviet Azerbaijan. When in 1986 Mikhail Gorbachev became the leader of the Soviet Union, he launched a process of democratic reforms and announced democracy, perestroika. The overwhelming majority of the people of Karabakh, who were and remain Armenians, and they had a status of autonomous oblast in Soviet Azerbaijan, decided to use this opportunity and in line with the legislation of the USSR, decided to secede from Azerbaijan.

The leadership of Soviet Azerbaijan decided to suppress this movement, using levers of force – police and so on. This was how the very initial stage of this conflict started. Afterwards, when the collapse of the USSR started, Azerbaijan, like many other Soviet states, decided to become an independent state. And the law of the USSR says that if any of the member states decided to get independence, the autonomous oblasts inside them decide their future on their own. 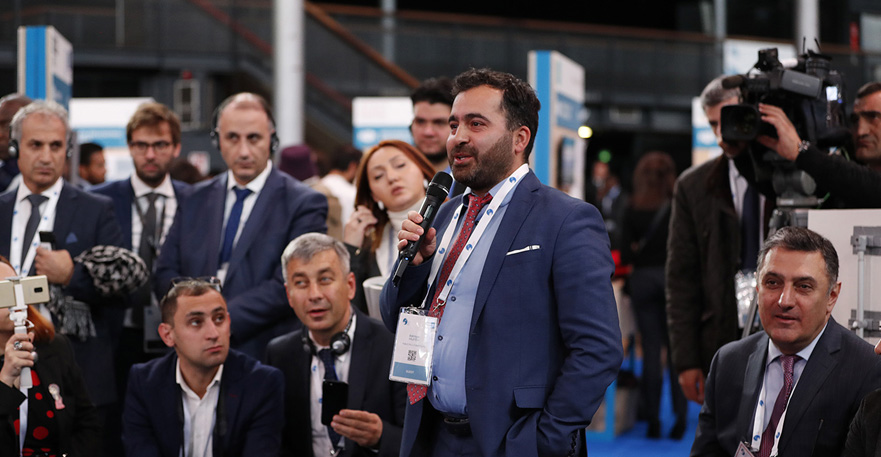 There are a number of reasons for that. First, in 1998 was left out of the negotiation process. As a result (not only because of this reason, but also because of it) now Azerbaijan refuses to negotiate with Nagorno-Karabakh . They even refuse to negotiate in the format of the OSCE Minsk Group Co-chairs, where Russia, France and the USA are involved. While according to this format, there are 3 negotiation sides, which are Azerbaijan, Armenia and Nagorno Karabakh.

Below are the questions Erlanger asked and Pashinyan’s responses.

Nikol Pashinyan: A worse incident happened with “Arsenal” football club member Henrikh Mkhitaryan, who missed the Europa League final in Baku, which took place just a few months ago. The Azerbaijani authorities even banned fans to wear T-shirts with the name of Henrikh Mkhitaryan and people walking with such T-shirts were stopped by the Police in the streets of Baku.

S.E.: What will happen next?

The answer is very clear, because I am confident that if we want a sustainable solution to the issue, we have to take into account the interests of all the sides involved in that. I made that announcement hoping that we will hear a similar announcement from the leadership of Azerbaijan, my colleague Ilham Aliyev.

If we heard a similar announcement from Mr. Aliyev, it would be a real breakthrough in the negotiation process. I want to call on our partners from this important platform, from the place of this very important event (Paris Peace forum) to make a similar announcement that the solution should be acceptable for the peoples of Azerbaijan, Nagorno-Karabakh and the Republic of Armenia.

Of course, this is not a simple issue, but if we have assumed the responsibility in front of our peoples, which means also for the future of the region, which also means for the future of our world, we have to make real efforts for real changes.

Pashinyan then answered questions from the audience, one in particular coming from an Azerbaijani blogger who claimed he was born in Vartenis, Armenia, querying about the UN resolutions on Nagorno-Karabakh, granting Artsakh highest autonomy in Azerbaijan and the issue of citizens with Armenian surnames entering Azerbaijan. The blogger also took asked Pashinyan about the statement he made in August in Stepanakert where he said “Artsakh is Armenia. Period.” Below are Pashinyan’s responses to the blogger.

And what happened with the Azerbaijanis in Armenia? By the decision of the Government of Armenia, special buses were provided to them and the Police accompanied them and no Azerbaijani was injured in this process. These descriptions very clearly show the entire image of this conflict.

I expect to find such a solution to the conflict that will be acceptable for the peoples of Azerbaijan, Karabakh and Armenia. I announced about this in Stepanakert, and it’s already a year that I am waiting for a similar announcement form the leadership of Azerbaijan. I have personally asked Mr. Aliyev to make drastic changes in this process. But unfortunately, he continues announcing that Zangezur, Syunik, Sevan Lake and capital Yerevan are Azerbaijani territories. No one can talk with us in the language of force. And what did you expect me to announce under the light that the Azerbaijani leadership announces that they will conquer not only Karabakh, but also Zangezur and Yerevan? We propose peace and we are not a threat for anyone in the region, we want to prepare our public to peace.