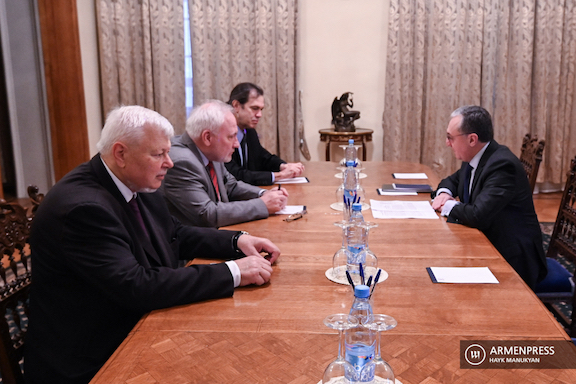 While in Moscow on an official visit, Armenia’s Foreign Minister met with the OSCE Minsk Group Co-chairs to discuss the humanitarian ceasefire agreement reached on Saturday and potential future Karabakh settlement talks.

Mnatsakanyan met in person with the Russian and the U.S. co-chairs, Igor Popov and Andres Schofer, who were accompanied by Personal Representative of the OSCE Chairman-in-Office Andrzej Kasprzyk. The French co-chair, Stephane Visconti joined meeting remotely.

Mnatsakanyan specifically emphasized the need to introduce mechanisms on the ground to ensure that the ceasefire is observed and to strengthen the fragile truce.

Russian Foreign Minister announced Monday that co-chairs held similar discussion with the Azerbaijan’s Foreign Minister Jeyhun Bayramov on Thursday in Geneva. Reuters reported last week that representatives of Russia, France and the U.S. introduced proposals that would kick start the Karabakh settlement negotiations, with elaborating on details. The news reported that Azerbaijan’s President Ilham Aliyev had accepted the proposals.

Following the meeting with Mnatsakanyan, the co-chairs issued a statement, in which they urged the sides to implement the provisions of Saturday’s humanitarian ceasefire agreement.
.
“The Co-Chairs note with alarm the continuing violence in the Nagorno Karabakh conflict. The Co-Chairs call on Azerbaijani President Ilham Aliyev and Armenian Prime Minister Nikol Pashinyan to take immediate steps to execute in full the obligations of the sides according to the October 10 Moscow statement, in order to prevent catastrophic consequences for the region,” said the statement.
“The Co-Chairs reiterate that civilian casualties are unacceptable under any circumstances. The Co-Chairs call on the sides to implement the humanitarian ceasefire immediately to allow the return of remains, prisoners of war, and detainees, and appeal to the sides to agree urgently upon a ceasefire verification mechanism,” added the mediators.

The co-chairs announced that after meeting with Mnatsakanyan and Bayramov, they are “working with the sides on the substantive issues of the Nagorno Karabakh political settlement process in order to reach a negotiated solution.”