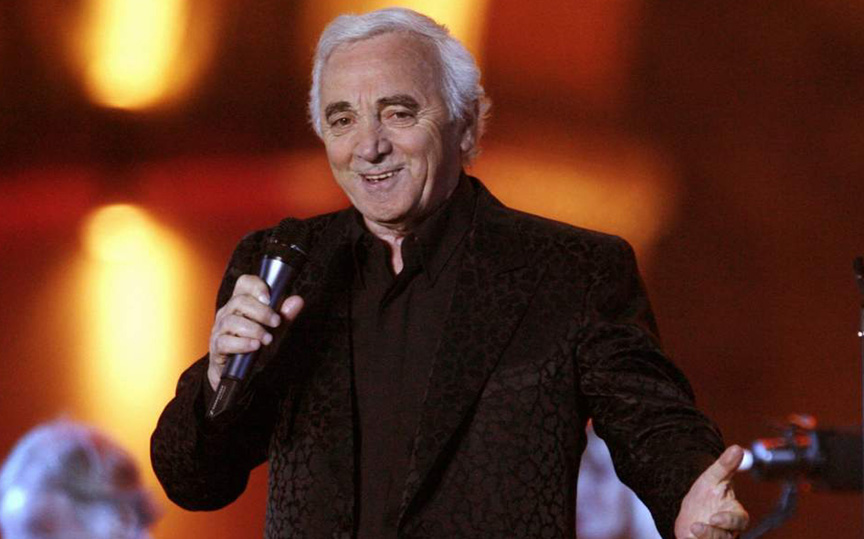 Start spreading the news: Aznavour is taking over Manhattan! An early gala celebrating Armenia’s 20th anniversary will take place in New York City on May 20 and will pay tribute to globally renowned songwriter and singer Charles Aznavour.

The entertainer will be honoured for his achievements within the world of music and for his service to Armenia. This sparkling event, taking place at the lavish Cipriani Wall Street, is organized by the Fund for Armenian Relief (FAR) and features an honorary committee including the likes of Liza Minnelli, Tony Bennett, Celine Dion, Placido Domingo, Atom Egoyan, and Sir Elton John, to name just a few.

Charles Aznavour, a scattered bead himself, is an Armenian ambassador par excellence throughout Armenia and the diaspora. In fact, he conveniently holds the actual position of Ambassador of Armenia to Switzerland. French is the language he mainly creates and sings in, yet his appeal is universal in more ways than one.

Referred to as a songwriter, composer, philanthropist, and diplomat, I consider Aznavour as a point of reference in a sea of cultures that collide within lands built on immigration, such as Canada. On several occasions, dropping Aznavour’s name has salvaged awkward moments and puzzled expressions following questions like, “What language is that you’re speaking?” or “Where are you from, originally?” When the answer is stated simply as “Armenian,” there is often either a moment of silence or an unconvincing “Oh.” However, the instant I utter the words, “Armenian, just like Aznavour,” a sigh of relief takes over.

Aznavour remains quite popular in a city like Montreal, known for its bi-cultural and bilingual (French-English) dynamics. The mere mention of his name triggers an immediate response besides the obvious ethnic association; the reaction is mostly positive, warm, and often accompanied by a French-Canadian, or any middle-aged man or woman, breaking into a spontaneous and passionate rendition of “La Bohème.”

Aznavour has a special place in the heart of Quebecers, likely because Quebec has a tendency to latch on to any cultural expression that is in French, given their quest for national independence and for the preservation of the language within the absorbing cultural influences of English Canada and America just to the south.

However, Aznavour himself has a special attachment to this province. After all, his conquest of North America first began in Quebec during the late 1940’s, when he performed in cabarets in Montreal and Quebec City before becoming famous internationally. Charles Aznavour was born in France, but has established and maintained several professional and personal ties to this largely francophone metropolis across the pond, where he remains widely appreciated and revered to this day. In his memoirs, he refers to his friends and musical entourage in the province as “nos cousins Québecois” (our Quebecer cousins).

One of the most memorable moments I had as a teenager was seeing Aznavour perform on stage in Montreal. This man, diminutive in stature, invaded the stage with his presence and voice. I recall taking a step back into time, perhaps to my parents’ youth, although his poetic lyrics have an everlasting contemporariness to them.

I realized then that one doesn’t have to rely on artifice to create a remarkable show. With Aznavour under a spotlight, his voice and charisma against a black back drop was all I needed to be transported to somewhere in Montmartre circa 1966. At the time, I knew very little of that place and era, and the true impact of his art, but I did know that it was all very appealing to me.

Leaving my teenage years behind (something Aznavour laments so masterfully in “Hier Encore”), his songs continue to resonate with me—as life progresses, as situations and perspectives change and evolve—and his songs take on new hues.

Whether or not you agree that he is one of the most famous diasporans around, it would be misguided to diminish Aznavour’s contributions to Armenia, as well as his pure talent, genius, and especially his place on the world musical stage. Many have critiqued him, frowned upon some of his decisions and statements, and they are free to do so, just as the artist himself is free to make his claims.

He is timeless and will be for generations to come. I went to three more Aznavour concerts over the years. The last one was supposedly part of his farewell tour. He then came back for one last performance… It’s also known as Armenian persistence. I am almost certain he will be back to his old love, Quebec.

In the meantime, it wouldn’t hurt to have more scattered beads in the making to namedrop…

Lalai Manjikian holds a PhD in Communication Studies from McGill University (2013). She currently teaches in the Humanities department at Vanier College in Montreal. Lalai writes and teaches in the areas of human migration, refugee social exclusion and inclusion, the ethics of migration, media and migration, intercultural communication, and diaspora studies. She is the author of Collective Memory and Home in the Diaspora: The Armenian Community in Montreal (2008).