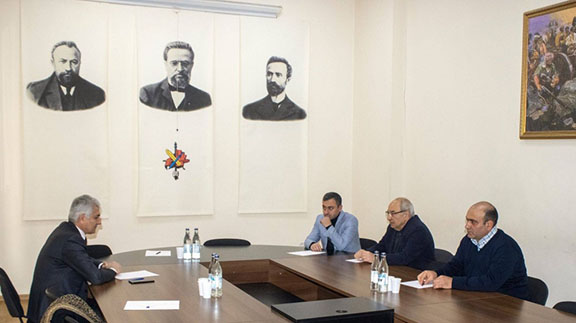 The current socio-economic crisis in Armenia and its main reasons, as well as the challenges facing the country were discussed.

Earlier on Wednesday, Manukyan met with representatives of the arts and culture communities in Armenia.

Manukyan presented the priorities of the National Accord government, which he seeks to lead, among them modernizing the armed forces, the reestablishment of Karabakh talks under the OSCE Minsk Group banner, the recalibrating of relations with allies and the realization of financial and socio-economic program to lead Armenia out of the current crisis.

Manukyan said members of the arts, culture and academic communities will have an important role to play in addressing national concerns and said the cooperation with these communities was crucial.
The participants of the meeting expressed their concerns about the current domestic political situation in Armenia, and expressed their collective belief that the best way to emerge from the crisis and to not endanger the country’s future would be the resignation of the prime minister and government.

The culture and arts representatives also presented issues of concern to them and their community, adding that they are planning to start a movement to make the voices of the intelligentsia heard in Armenia’s civic life.