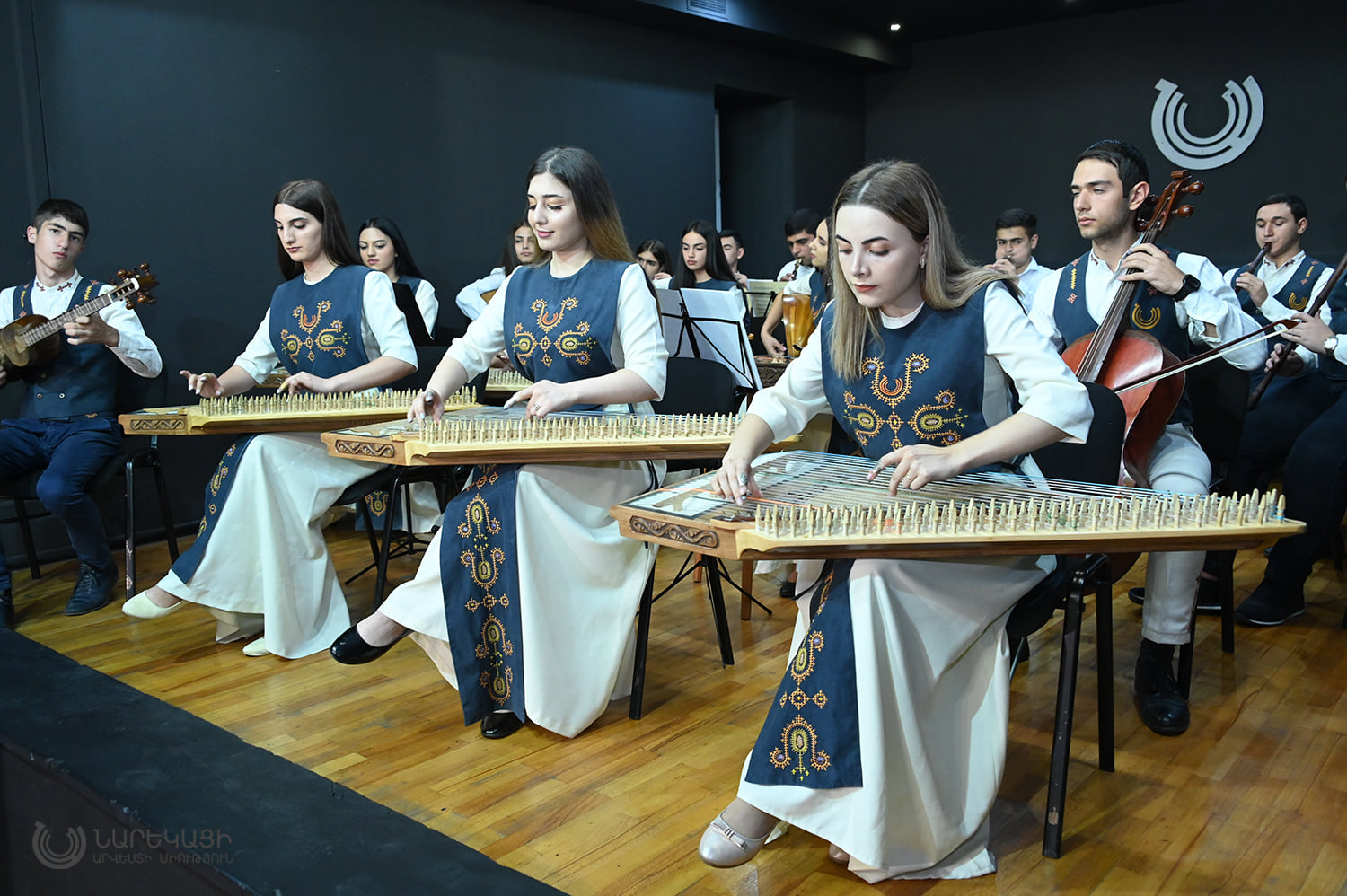 The event started with the Lord’s Prayer by Father Zgon Abrahamyan, the pastor of Erebuni community of the Ararat Patriarchal Diocese.

“It is very difficult for me to make a speech today. Only a few days ago we were to celebrate the 15th anniversary of the Shoushi branch of the Naregatsi Art Institute, but regardless of these tragedies, we must continue our mission with God’s blessing,” said Nareg Hartounian.

At the end of the event, Nareg Hartounian handed over a symbolic gift to Nubar Folk Ensemble, led by Artistic Director Lusine Nazaryan. 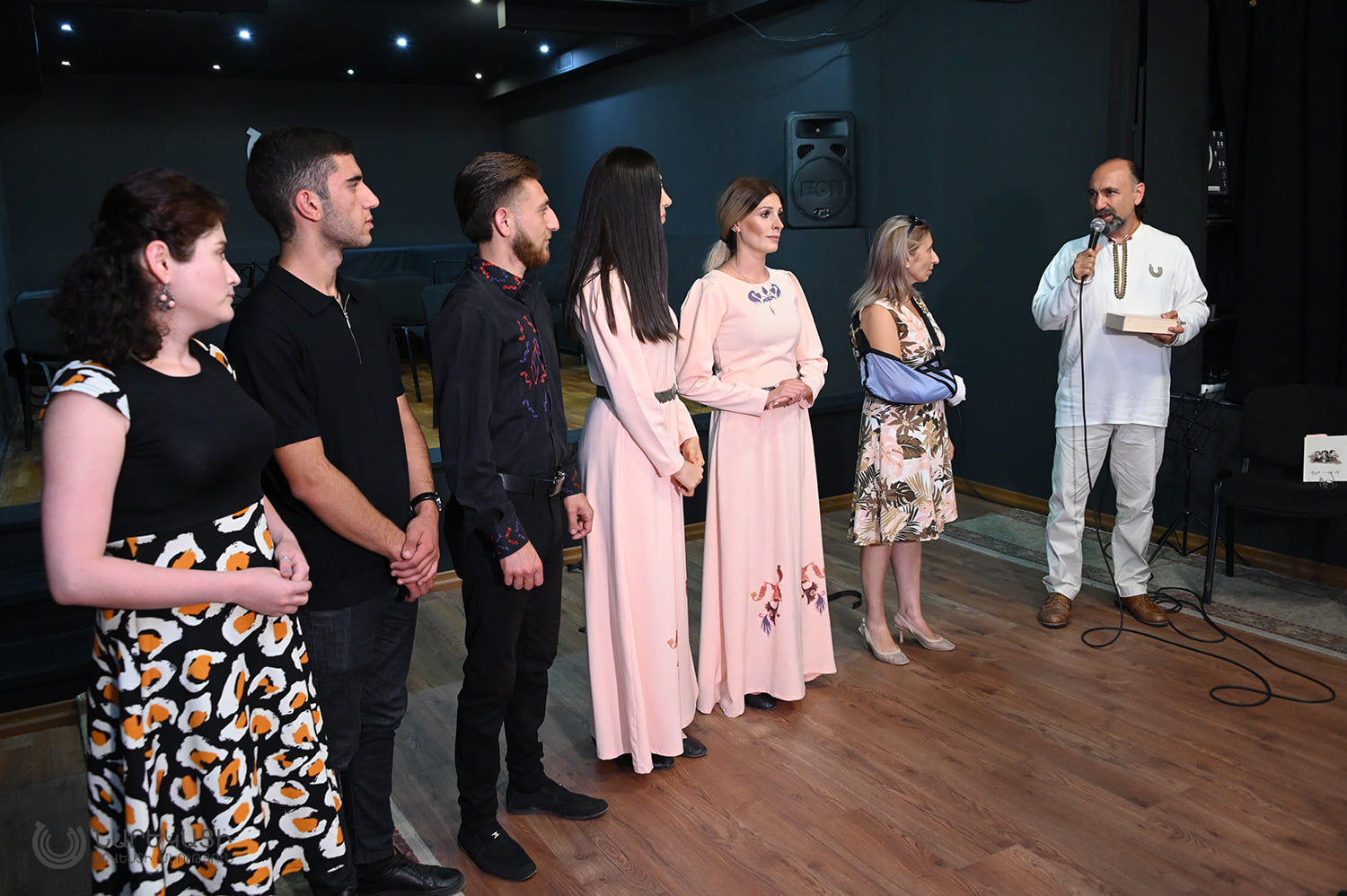 Naregatsi Art Institute (NAI) is a non-profit art organization established in 2000 with headquarters in Yerevan since 2004 and educational art center in Shoushi since 2006. Founded by philanthropist Nareg Hartounian and named after Saint Gregory of Narek, the NAI’s principle mission is to preserve and promote Armenian art, culture and spiritual values.

Since its inception, the NAI each year has presented more than 300 concerts, exhibitions, lectures, master classes and film screenings collaborating with a great number of artists from Armenia and abroad. As part of its contribution to Armenian culture, NAI has created numerous unique books, CD’s and publications exploring various facets of the rich Armenian cultural heritage.

The NAI is home to The Naregatsi Orchestra, The Nova Folk Instruments Ensemble (each of which presents concerts locally and internationally), The Njdeh Folk Dance Group and The Painting Class.

The Art Center in Shoushi, provided a variety of classes in music (including piano, bard songs class, choir), as well as instructions in painting, wood engraving, photography, theater, puppet theater, dance, recitation, carpet making, English language, art therapy, computer graphics and designing. on September 27, 2020 with the support of Turkey and the participation of international terrorists, Azerbaijani army attacked Artsakh resulting in the occupation of the town of Shoushi.

The NAI provides a special place for children, emerging artists, artists with disabilities and artists living in the regions of Armenia outside of Yerevan. It also provides space and resources to anyone with something of artistic value to share. All activities at the NAI are free of charge for both the audience and featured talent.

Since September 27,2020, the day of the war that Azerbaijan unleashed against the population of Artsakh, Naregatsi Art Institute has come to aid the families affected by this aggression. Using internal resources and direct assistance from benefactors, Naregatsi Humanitarian Aid engaged to help the displaced people of Artsakh.

Naregatsi Humanitarian Aid launched a humanitarian outreach program, which aims to provide assistance to over 1000 displaced families from Artsakh.