Long live the AYF and our ARF youth organizations 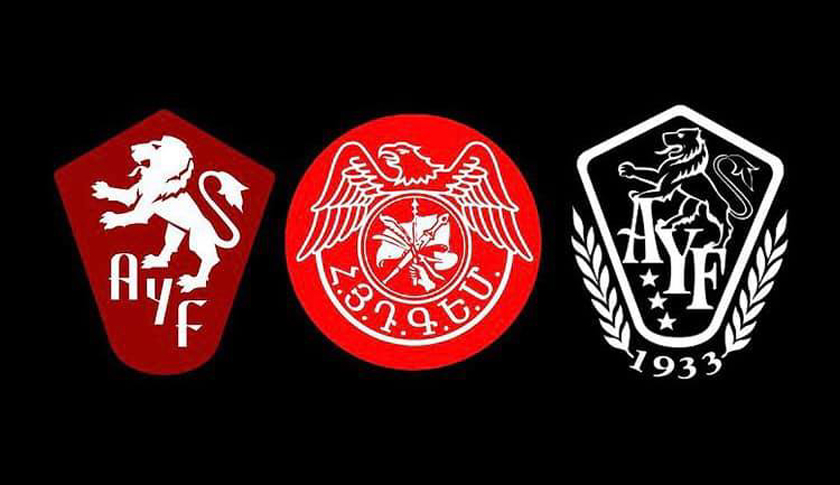 “The demands for justice are now embedded in the blood of the Armenian people. You cannot rattle our nerves or change our minds, or treat our people like animals. Try if you dare, but those of you hoping to end the revolution will be all alone in the end.” Rosdom (Stepan Zoryan) May 1, 1896, Droshak.

On the anniversary of Nikol’s treasonous capitulation to Azerbaijan, the Armenian Youth Federation (AYF), Armenian Revolutionary Federation (ARF) youth organizations and student associations around the world organized protests and expressed their discontent for and opposition to the current regime in Armenia, specifically Nikol Pashinyan and his Civil Contract Party, for the devastation they brought to the Armenian nation; the lies before, during and after the 44-day war; the loss of lives and lands; abandoning Artsakh and Syunik; disregarding Armenian POWS; disrespecting the martyred and the wounded; continuing to concede to the enemy; continuously attempting to normalize relations with Azerbaijan and Turkey; and most recently abandoning the Goris-Kapan highway, essentially isolating southern Syunik.

Some on social media reacted with verbal attacks against the AYF because of this resistance movement and the patriotic and principled position of our youth, calls for unity in furtherance of a national agenda and reestablishment of pro-Armenian policies, rejection of the Pashinyan regime and their treasonous policies, and more. These social media attacks did not provide constructive criticism, simple opinions or debate issues, but instead hurled insults and slurs attempting to bully our youth to back down because the AYF has once again taken the correct position and acted accordingly to save the homeland despite the current treasonous and fascist regime in Armenia.

Most of these attempts to bully or shame our youth on social media platforms, whether at the behest of Nikol or other foreign powers, are in actuality fake accounts, bots, or marketing campaigns paid for by our nation’s enemies. However, some are actual people, albeit ignorant, naïve, treasonous or self-serving. Their short-sighted agenda and misguided loyalty are fed by the steady stream of disinformation and misinformation they’ve been fed over the years, more so since the velvet regime change, to create obstacles and setbacks to a revival of Armenian patriotic ideology and course of action.

These opportunists utilize coordinated talking points to attack or dismiss any of their critics in order to detract, distract and divide our communities, organizations, and the Armenian people in general; their purpose is to eliminate Armenian nationalist and patriotic ideology and action similar to the unsuccessful attempts by the Soviet Union, the Ottomans and Turks. Whether they realize it or not, these people are actually supporting the same pan-Turkic agenda that Pashinyan peddles, leading to the establishment of a new Turkish empire with a subservient or colonized Armenia.

Pashinyan continues to give more land away to the Azeris such as the Goris-Kapan highway and announces that it (the highway) belongs to the Azeris and there’s a dirt road for people to use through the mountains as winter approaches, which is simply another attempt to normalize a catastrophic capitulation. He and his corrupt dictatorial regime continue to arrest protesters including many brave soldiers who fought in the 44-day war. The ARF Youth organizations including our AYF made a stand.

Our youth are making a difference, and that is why the AYF has become the target of a widespread coordinated attack on social media by Pashinyan and other Azeri-Turkish pawns and hired guns. They say things like, “if you don’t live in Armenia, you shouldn’t have an opinion,” “if you cared so much, why didn’t you fight,” “the Dashnaks are bad and they’ve lied to the youth (and membership),” “this is the time for unity, we don’t need more division,” and “the previous regimes are at fault for everything” in their attempts to shift and control the narrative.

First of all, before anyone attempts to attack the AYF with unfounded and unsubstantiated insults, they should educate themselves about this great organization that has been continuously and diligently working for the Armenian cause and the Armenian people since 1933, when it was established by General Karekin Nejdeh at the behest of the ARF. In just under 90 years, it has prepared numerous generations of Armenian patriots and activists, maintained the Armenian culture and heritage in the diaspora, actively participated in the Armenian struggle via the Armenian National Committee of America (ANCA), the armed struggle and during all the Artsakh wars. Its members even protected Armenian communities in the Middle East during civil wars and riots in California. They have sacrificed their time, money, and at times their lives, for the Armenian nation in the diaspora and the homeland.

More recently, the AYF and ARF youth organizations have organized summer camps in Armenia and Artsakh with the Youth Corps and other programs. They support the soldiers and their families through various initiatives such as With Our Soldiers. They have offered humanitarian aid to displaced families,  participated in ANCA-led initiatives and provided food and basic necessities to families in the US, Lebanon, Armenia and elsewhere. In times of war, many joined the military or volunteer brigades, or provided much needed medical and technical assistance at or near the front. Many gave their lives during last year’s 44-day war. Others were wounded, and most who returned and joined the protests were arrested by the government of Armenia.

Second, those who dare attempt to belittle and bully the AYF should look at themselves to see if they’ve actually done anything for Armenia, Artsakh, Syunik, Diaspora communities, or the youth in general, that allows them to lecture AYF members about caring for the homeland, patriotism, unity, politics, action and sacrifice. Most have never lifted a finger for the Armenian cause, and those who have pale in comparison to what the AYF, ARF youth organizations, and student associations do on an ongoing basis.

To these pro-Turk/Nikol-following keyboard warriors: what have you ever attempted to do, what have you ever successfully accomplished or done, and what sacrifices have you made for the Armenian nation, homeland and our people’s struggle for justice? The silence is deafening.

I commend the AYF, ARF youth organizations and student associations! Continue to carry the torch, remain principled and patriotic, stay active and focused, and together we shall continue our struggle for justice.

“Now it remains for all of us to collectively realize and recognize the various forms of garbage on the revolutionary path, hurl them aside and continue the fight unobstructed and without distraction to save our people.” Rosdom (Stepan Zoryan) May 1, 1896, Droshak.