Jewish-Australian community ramps up support for recognition of Armenian Genocide 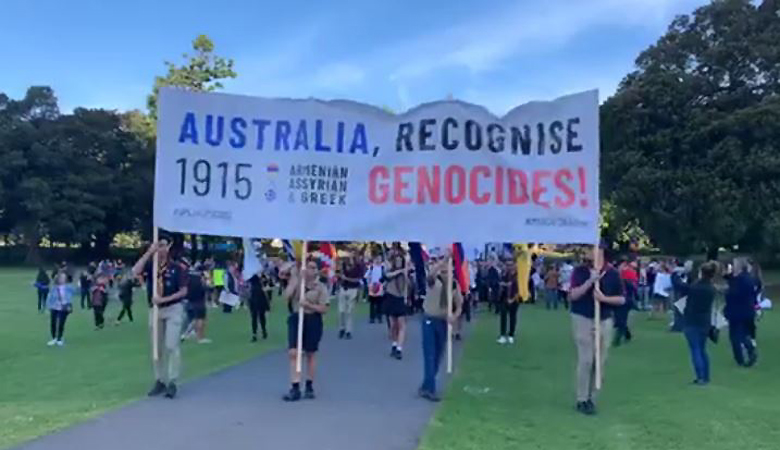 Photo: MarchForJustice for the 106th anniversary of the Armenian, Greek and Assyrian Genocides in Sydney, Australia.

An Editorial by the Australian Jewish News, together with calls from the Executive Council of Australian Jewry, the Zionist Federation of Australia and leading Jewish-Australian Members of Parliament Mr. Julian Leeser MP and Mr. Josh Burns MP, have reaffirmed their community’s support for Federal Government recognition of the Armenian Genocide following the historic recognition by United States President Joe Biden on 24th April 2021, reported the Armenian National Committee of Australia (ANC-AU).

Firstly, the Editorial from the Australian Jewish News addresses the lack of recognition of the 1915 genocides by Israel: “One of the reasons we commemorate the Holocaust is to ensure such horrors never happen again – not just to Jews, but to anybody. We cannot insist the world remembers what happened to our people without insisting it also recognises what happened to others.”

Turning its attention to Australia’s Prime Minister Scott Morrison, the editorial highlights his retraction from an earlier position supporting Armenian Genocide recognition and says: “We applaud the Executive Council of Australian Jewry’s April 2020 call for ‘all nations and governments to recognise the reality of the genocide’ committed against the Armenians, Assyrians and Greeks from 1915 to 1923 – a call this week echoed by the Zionist Federation of Australia. It is time for that call to be heeded.”

The increased calls for recognition by the Jewish-Australian community began even before President Biden’s declaration, with the New South Wales Jewish Board of Deputies unanimously passing a motion reaffirming its support for Federal Australian Government recognition of the Armenian, Assyrian and Greek Genocides at a 20th April plenum they had titled “Learning from the Holocaust: Why countries should recognise the Armenian, Assyrian and Greek genocides”.

The motion, introduced by Mr. Dane Stern of the NSW Jewish Board of Deputies, pledged full support of the Executive Council of Australian Jewry’s “call upon all nations and governments to recognise the reality of these genocides”.

During the plenum question-and-answer discussion, moderator and Co-CEO of the Executive Council of Australian Jewry (ECAJ), Mr. Peter Wertheim said it was important to “speak out and shine a light…because silence is a form of complicity – the longer it goes on, the more these sorts of atrocities proliferate”.

President Biden’s recognition came just days after the plenum, and the Australian Jewish News (AJN) captured the reaction of Mr. Wertheim and others.

Wertheim described U.S. recognition of the Armenian Genocide as being “long overdue but nonetheless very welcome” and labelled threats of retaliation by Turkey to nations including Australia “if they dare to acknowledge the genocide” as “not the behaviour of a government that is confident it has truth on its side”, reported the AJN.

“The mass killings of Armenians [and Assyrians and Greeks] by Ottoman forces was not merely a random by-product of World War One – it was officially ordered, organised and systematic,” Wertheim said. “The evidence produced by historians is overwhelming.”

“The Australian Government will hopefully rethink its position in light of the US announcement,” Mr. Wertheim added.

President of the Zionist Federation of Australia Mr. Jeremy Leibler stated that both Australia and Israel now need to act.

“It is our moral duty as Jews and as supporters of Israel to be tellers of truth in matters such as these,” Mr. Leibler said.

“As Israeli opposition leader Yair Lapid said, recognising the Armenian genocide is a moral issue, and should be divorced from strategic issues or the national interest.”

Member for Berowra Mr. Julian Leeser, who is one of over 40 Australian Federal parliamentarians who have signed the Joint Justice Initiative of the Armenian-Australian, Assyrian-Australian and Greek-Australian communities calling for national recognition of the 1915 Genocides, was a keynote speaker at the plenum.

“As a Jewish Australian, I don’t think I had another choice. It was a genocide witnessed by journalists and by foreign officials at the time [1915-1923], and yet it has been a genocide that has been swept under the carpet,” Mr. Leeser said.

“As Jews, we have a particular responsibility to call this out – the first genocide of the 20th Century – because it is to be remembered that the man that orchestrated the greatest genocide, against our people – Adolf Hitler – justified his actions by saying, and I quote: Who, after all, speaks today of the annihilation of the Armenians?”

Another Jewish-Australian MP who is a signatory to the Joint Justice Initiative, Member for Macnamara Mr. Josh Burns told the AJN: “The time for justice is now. They’ve (U.S.) acknowledged the true history and shown global leadership, together with 29 other nations which all recognise the genocide.”

“We welcome the Jewish-Australian community’s continued support for recognition of the Armenian, Assyrian and Greek Genocides by the Australian Government and all governments who have not taken the step the United States has now taken along with 30 other righteous nations,” said ANC-AU Executive Director, Mr. Haig Kayserian.

“The motion passed by the New South Wales Jewish Board of Deputies and comments by Jewish-Australian MPs and community leaders, including the Co-CEO of the Executive Council of Australian Jewry Mr. Wertheim, are reflective of their long-standing commitment to seeing the eradication of future genocides by recognising historical and present injustices.”

“We thank our friends in the Jewish-Australian community,” Mr. Kayserian added.