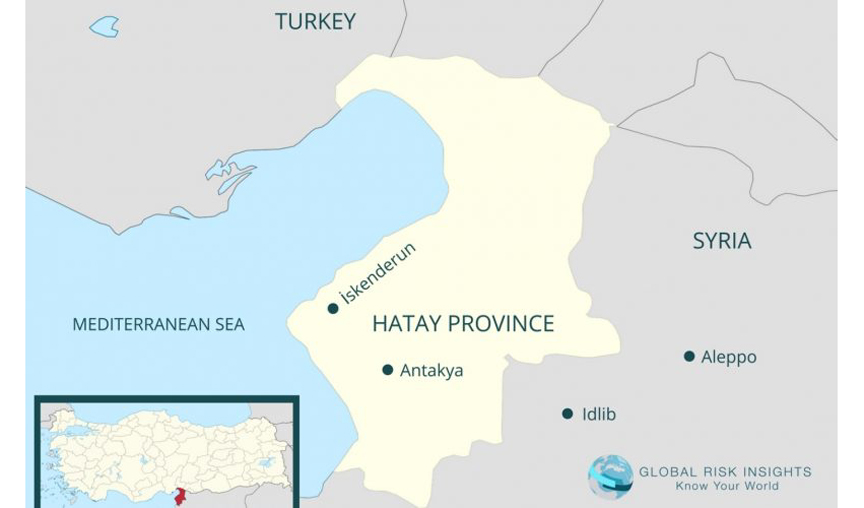 The Turkish province of Hatay has largely been immune to the regional turmoil. As a beacon for Syrian refugees and economic resiliency, the tiny territory has buckled the political strife for now, but how long will it last?

Much of the recent attention to Syria has focused on the chemical weapons attack on Khan Shaykhun and the U.S. retaliation against the Syrian government. However, it is critical to consider the potential repercussions of the rising violence in Syria’s Idlib province and potential spill over into neighboring Turkey. For the last few years, Turkey has struggled to contain rising internal violence brought on by both the so-called Islamic State (IS) and the Kurdistan Workers’ Party (PKK). In early March the downing of a Syrian MiG-23 in Turkey’s Hatay province once again highlights the overlap of the conflict between Syria and Turkey. A search and rescue operation recovered the pilot who said his plane had been shot down by Syrian rebels. As the geopolitical gamble continues to play out in northern Syria after the chemical attack and the fall of Aleppo, will the delicate balance of Hatay’s internal politics soon be shattered?

Turkey’s Hatay region is known to most Westerners for its fictional portrayal in the 1989 movie, Indiana Jones and the Last Crusade, as the ‘Republic of Hatay.’ In reality, the region’s long history has centered on a sovereignty dispute between Turkey and Syria dating back to the collapse of the Ottoman Empire and the subsequent French rule that followed the end of WWI. Hatay was known at the time as the Sanjak of Alexandretta. The region was later turned over to Turkey in 1939 before Syria’s independence was granted. The region has never been officially recognized by Syria as having become part of Turkey and official Syrian maps still show the territory as being within Syria’s borders.

The disputed territory has a deep historical and political sentiment for the Syrian government. Syrian Social Nationalist Party elder Issam al-Mahayri spoke in a TV interview how the loss of Iskenderun (Alexandretta) was a primary moment for his party’s early history, motivating many followers. Since then, the issue has been largely quiet. Until the Syrian crisis began, steps for cross-border economic development were under way, such as the Friendship Dam that spanned the Orontes River, but the steps towards reconciliation over Hatay were suddenly brought to a halt.

Surrounded by violent events in Syria

Hatay, with a population of 1.53 million, is bordered prominently by Syria’s volatile Idlib province, which is almost completely controlled by rebel factions. The rebel groups that fled Aleppo have joined the Islamist faction, Ahrar al-Sham. These groups have been recently seen violent clashes with the al-Qaeda linked Tahrir al-Sham (HTS – formerly Jabhat al-Nusra), which has been in control of Idlib city and nearby Jisr al-Shughour since April 2015. A number of factions defected from Ahrar al-Sham to join HTS making it the largest Islamist rebel group in Syria. In the coming months this region will likely see an increase in aerial bombardment by a number of state actors – Syria, Russia, and the United States. The Syrian MiG-23 pilot indicated he had been en route to Idlib for a mission. A U.S. airstrike in mid-March in the Syrian town of Jinah on al-Qaeda linked militants attracted international criticism for civilian casualties.

According to media reports and interviews with Turkish officials around 80 percent of supposedly Turkmen refugees who entered Yaylagdi on the Hatay border are non-Turkmen and jihadists coming from Central Asia, the Caucasus and North Africa. This open-door policy has come to an end due to the blowback of IS-related attacks within Turkish territory. A wall has been constructed to stop refugee and jihadist flows.

The largest international crisis that occurred in Hatay took place in November 2015 when Turkish F-16s took out a Russian Su-24 fighter jet, which according to Turkey, had violated its airspace while attacking opposition militia in Bayirbucak. The Russian pilot was later killed by Turkmen militiamen operating in the area. The incident caused extreme tension between Russia and Turkey, but following an apology from Turkey’s President Recep Tayyip Erdogan brought about a new opening for Russo-Turkish relations.

Fighting on the ground in this area will pick up in the coming months as waves of rebel fighters relocate to Idlib from Homs under an agreement with the Syrian government. For the Syrian government, looking to build on momentum after the fall of Aleppo, reestablishing control along this area will eventually be paramount for controlling “Useful Syria.” To Hatay’s immediate south, the Alawite coastal city of Latakia is where the regime-aligned Desert Hawks militia are based, which has built a close relationship with Russia.

Turkey has designated the province as a special security zone. Recent Turkish security operations unfolded in February in Hatay’s Amanus (Nur) Mountains against Kurdish PPK guerillas which saw the loss of a Turkish soldier. The PKK insurgency in Turkey has been boosted by the consolidation of territory by the People’s Democratic Party (PYD) and their subsequent militia group –People’s Protection Units (YPG) in northern Syria. The Afrin Canton which borders Hatay is the far western canton of the resurgent Syrian Kurdish movement’s semi-autonomous Rojava.

Turkish troops have consistently shelled villages that border this region and engaged in border skirmishes as part of its Syria policy in curtailing a Kurdish entity across its southern border. Last week, however, the YPG signed an agreement with Russia to establish an outpost and train militia fighters near the city of Afrin, a move that severely dents Turkish plans and constrains their ability to influence the border regions with Hatay. Turkey has also announced an end to its Euphrates Shield campaign, but it is not yet clear if this would lead to the withdrawal of Turkish troops however further skirmishes are likely as the Kurdish issue on their border is now Turkey’s number one security dilemma. Back channels however present the Syrian regime as the only force capable of containing the Kurds.

Hatay’s refugees and the Turkish referendum

Demographically diverse, Hatay is an area which has a large Arab population which is predominantly Alevi. Running contrary to the rest of Turkey, Hatay carries a strong pro-Assad current. “Anti-imperialist” rallies staged in support of the Syrian government have drawn over ten thousand supporters. Turkey’s Republican People’s Party (CHP) is widely supported locally and the party has been known to pay goodwill visits to Assad.

Hatay has felt the brunt of the refugee crisis with around 402,000 officially registered refugees. The numbers of those unregistered are unknown but at least 500 people a day try to transverse the Syria-Turkey border in Hatay. Since refugee numbers have expanded over the years of conflict, the region has become an important transit corridor for Turkish-backed jihadists.

Tension between local Turks and the Syrian refugees (who number almost half a million) has occasionally flared up. Many secular-minded Alevi residents are suspicious of Ankara’s intentions and feel that the arrival of many Sunnis in the area is actually a calculated attempt to curb their political influence, particularly since the AKP does not have a strong ideological base within Hatay.

Special privileges are being granted by the Turkish government to the refugees, along with the possibility of being able to vote in future elections. This has led to much political uncertainty about the future of the Syrian refugee community in the southwestern region. The refugees, for their part, feel unwelcomed and mostly tend to stay out of contact with the state’s local presence in Hatay, severely undermining the province’s social, political and economic foundations.

The influx of refugees has placed significant pressure on public services (especially the health system) with Syrians also competing with locals for employment. The shifting demographics of Hatay has increased the Arab population from 34 percent to 47 percent, with the region being split equally between Sunni and Alevi communities. With rising unemployment, jobs are to be found in smuggling and the illegal drug trade. In recent years large amounts of the lucrative amphetamine Captagon have been seized by Turkish police in Hatay.

The Syrian conflict has negatively affected both the local and regional economy. Prior to the conflict, Hatay’s proximity to Syria afforded it the unique opportunity of having deep trade links with the whole Arab World. The cosmopolitan city of Antakya attracted large numbers of foreign tourists and Christian pilgrims. Today the conflict has completely shut down the essential land trade. Only sixty miles away, Aleppo was once a major trading partner for Hatay. However, Turkish exports are now shipped out by sea through the port of İskenderun.

In addition, growing structural problems within the Turkish economy has seen the flight of investment capital. This means that if the AKP is to remain in power, it will funnel its projects to parts of the country which support its legislative agenda rather than allocate funds to places like Hatay, which are vehemently anti-AKP. Unless there is a conclusion of the conflict in Syria, the economic outlook is certainly not positive.

The April 16th Referendum aimed at expanding President Erdogan’s powers presents a significant challenge to the Alevi community within Hatay. With the result on a tightrope between the ‘Yes’ and ‘No’ camps, many believe that despite the outcome of the referendum things will continue to be tough for Turkey’s minorities. Erdogan has aimed to court the nationalist vote sewing mistrust towards Turkey’s Alevi and Kurdish communities.

In the past, Alevi and Kurdish groups in Hatay have dealt with social exclusion but are resilient in the face of adversity. The polarizing rhetoric will only continue if Erdogan is not granted the shift to an executive presidency. Furthermore, it will be very difficult for the AKP to try to demonstrate that it is indeed a party that does not represent just one segment of Turkish society. Social, political and economic uncertainty will remain a factor in Hatay’s future as long as the Syrian conflict ravages on and Turkey’s domestic politics continue to be fueled by foreign policy.

This article was co-authored by Global Risk Insights’ Senior Analysts, Iain MacGillivray, based in Ankara, Turkey and Chris Solomon based in the DC area.

Global Risk Insights (GRI) is a world-leading online publication which provides analysis on political risk & geopolitics. GRI’s network of analysts range from intelligence officers, diplomats, academics to a former advisor to President Obama. GRI has been widely referenced, including by The New York Times, BBC, The Wall Street Journal, The Washington Post and many more.