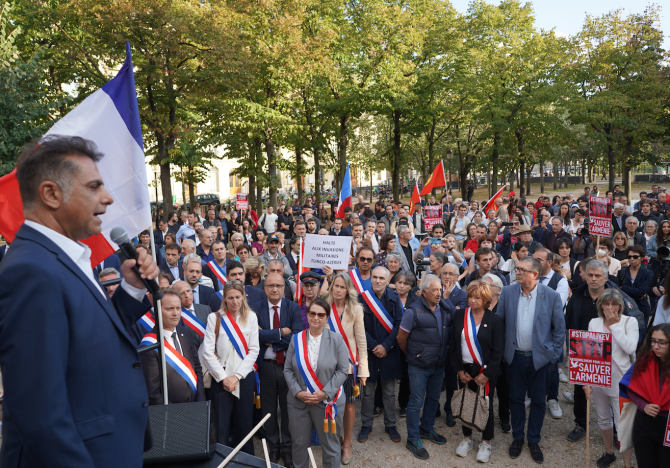 (Armradio) – Hundreds of people gathered in front of the next to the Ministry of Foreign Affairs to protest strongly against the pre-planned aggression by Azerbaijan on the sovereign territory of Armenia. The demonstrators held slogans reading “Stop Aliyev! Get out of Armenia!”, “Pan-Turkism = fascism,” etc., Jean Eckian informs.

Ara Toranian, co-chairman of the Coordinating Council of Armenian Organizations of France (CCAF), thanked France, which was almost the only power in the world to react diplomatically to the situation by referring the matter to the United Nations Security Council.

“Today, I am Armenian. Erdogan is a danger for the Kurds, for the Armenians, for the Syryans, but also for France, for the West, for our youth and the generations to come,” she added.

CCAF co-chairman Mourad Papazian noted: “Today, Baku is attacking the Republic of Armenia, a sovereign territory recognized by the UN. It is not allowed to attack a territory recognized by the UN without receiving a response from the UN. […] We fear for Armenia, its security and its people. We must find a way to ensure peace for the Armenians of the Republic of Armenia and Nagorno-Karabakh.”