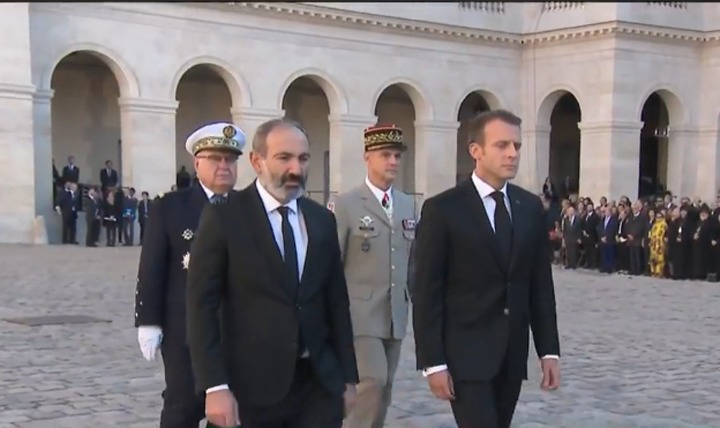 (Armradio) – 12:00 More than 2,000 people have gathered Friday at Les Invalides, a national monument in the heart of Paris, to pay tribute to legendary French singer Charles Aznavour, who died on Monday aged 94.

French President Emmanuel Macron will deliver a speech at a ceremony to be held in the courtyard of Les Invalides, a complex of buildings and monuments related to French military history.

Attending the ceremony are also ex-Presidents of France Nicolas Sarkozy and Francoise Holland.

Aznavour was found dead on Monday at his home in Mouries in southeastern France.

12:18 Aznavour’s body is being brought in under the sounds of Armenian duduk. The coffin is covered with the French flag, the wreath is made of red, blue and orange flowers – the colors of the Armenian flag.

12:22 The ceremony begins with an army band rendition of Armenia’s national anthem, then France’s.

Nikol Pashinyan said Aznavour, like many Armenians, found refuge in France. On behalf of the Armenian people he expressed gratitude to the people of France for having welcomed Aznavour and the survivors of the genocide.”
“He was the voice of Armenian pride,” Pashinyan said.

“His songs played a calming role for thousands of people,” Macron says.Macron “For almost a century, he breathed life into us,” the French President added.

” “He was a son, a friend, an ambassador to Armenia. The 1988 earthquake marked the beginning of his commitment to Armenia”. Follow the ceremony live,” he added.

“Some of our heroes become heroes with their blood, others with their use of and love for the language,” Macron said.

“Charles Aznavour would have wanted to live to 100, he had promised it to himself, to us, his last challenge. But as he was close to his goal, death came for him in a quiet way,” said Macron.
Macron is due to go on an official visit next week to Armenia that Aznavour had hoped to attend.

13:15 The ceremony of national homage comes to an end. France said goodbye to Charles Aznavour, demonstrating the late singer’s status as a national icon at a farewell attended by President Emmanuel Macron, his two predecessors and the leader of Armenia, Prime Minister Nicol Pashinyan.

Celebrities, among them actor Jean-Paul Belmondo and singer Mireille Mathieu, attended the ceremony.