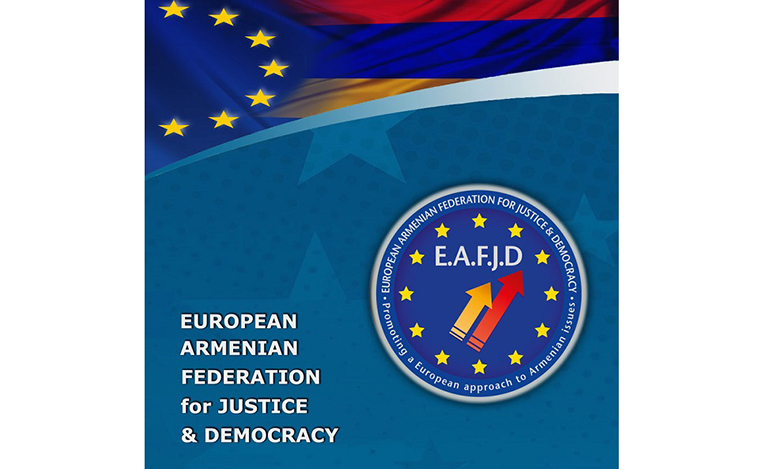 The European Armenian Federation for Justice and democracy (EAFJD) deplores the visit of some foreign ambassadors and diplomats in Azerbaijan to occupied Shushi in Nagorno Karabakh/Artsakh.

The diplomats’ unfortunate decision to join this propaganda tour organized by the Azerbaijani government is a regrettable act of approval and legitimization of the war crimes committed by the same authoritarian and criminal Azerbaijani regime against the native Armenian population of Shushi and Nagorno Karabakh in general only few months ago.

In fact, with a massive support of Turkey and the deployment of paid Syrian terrorist fighters, the Azerbaijani armed forces deliberately destroyed Shushi’s civilian infrastructure and bombed the town’s main cathedral twice during the 44-day war in the autumn 2020. As a result of this disastrous war unleashed by the Turkish-Azerbaijani tandem, the centuries-old Armenian town of Shushi is now completely ethnically cleansed of its Armenian population for the first time in history. The Azerbaijani President later publicly and proudly announced that they “chased the Armenian population like dogs”.

It goes without saying that the refusal of the ambassadors the three co-chair countries of the OSCE Minsk group – France, Russia and the USA, to join this trip, is a clear message that the Karabakh conflict is not resolved yet. As a matter of fact, two of the three OSCE basic principles – non-use of violence and equal right to self-determination of peoples- were blatantly violated during the war by the Azerbaijan authorities.

It is a pity that the diplomats who visited Shushi did not choose to follow the example of the co-chair countries of the OSCE Minsk group. By accepting the invitation, they became part of the propaganda campaign of Azerbaijan’s authoritarian regime. Moreover, they have undermined the efforts of the OSCE Minsk group co-chairs of finding a lasting, peaceful and just resolution of the Nagorno Karabakh conflict. Besides, these diplomats have completely ignored the fact that Azerbaijan continues to illegally keep and torture more than 200 Armenian prisoners of war and captives, using them as a political bargaining chip, in violation of the tripartite ceasefire statement of November 2020 which also the Azerbaijani President Ilham Aliyev signed and which stipulates the return of all the captives and prisoners of war.

Furthermore, Azerbaijan continues to refuse international organizations such as UNESCO to access the Armenian architectural and religious monuments in Nagorno Karabakh. In the meanwhile, documentation of desecration and even complete destruction of some of these religious monuments has emerged. Besides, since May 2021 the Azerbaijani army has encroached on the sovereign territory of the Republic of Armenia in its Syunik and Gheghargunik regions while kidnapping Armenian servicemen.

It is highly regrettable to see how diplomacy, also that of countries which claim to care about human rights and ethics, turns into crude lip-syncing to an authoritarian regime most famous for establishing elaborate corruption mechanisms across Europe, such as the Azerbaijani laundromat and unleashing a war against the native Armenian population while deploying paid terrorist fighters. As a European grassroots organization we do believe that diplomacy is much more than this, that dignity as well a certain sense of justice must be its core and we will certainly continue our work aimed at this.