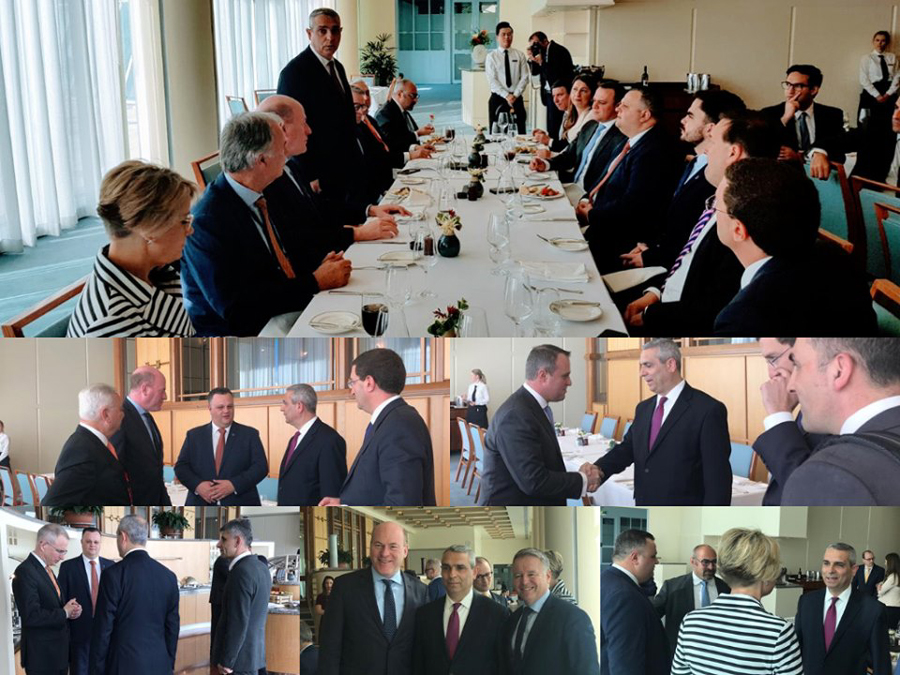 CANBERRA: A welcome reception was held in honour of the Republic of Artsakh delegation attended by over a dozen Australian politicians in what was a landmark first day for the visiting team in Federal Parliament House Canberra, reported the Armenian National Committee of Australia (ANC-AU).

Trent Zimmerman MP and Joel Fitzgibbon MP – co-chairs of the Australia-Armenia Inter-Parliamentary Union – hosted a lunch in the Private Members’ and Guests’ Dining Room in coordination with ANC-AU, with the delegation as their special guests, led by the country’s Foreign Minister Masis Mayilyan, Member of the National Assembly Davit Ishkhanyan and Foreign Ministry official Artak Nersisyan.

Zimmerman and Fitzgibbon both spoke to open official proceedings, after which Mayilyan thanked the attending members of parliament and senators, who he said would become friends of Artsakh, as the unrecognised Republic seeks recognition for its independence, which will ultimately deliver security and prosperity for its indigenous Armenian population.

ANC-AU Executive Director, Haig Kayserian addressed the reception to thank them for their continued solidarity on issues of importance to Armenian-Australians.

“If you poll Armenian-Australians today, they will tell you that Artsakh is the top international issue on their agenda,” said Kayserian. “Artsakh is part of the Armenia that our ancestors were from before the Armenian Genocide, and introducing the plight of its people to our political representatives is an absolute priority for the Armenian National Committee.”

“The Minister’s presence delivered an optimal opportunity for us to spread the importance of Artsakh, but that would not have been possible if friends like you all did not accept our invitation and attend.”

Kayserian said they were looking forward to making some announcements in the coming days, which will help remove the taboo associated with Artsakh in Australia’s parliament, which has been worked on in collaboration with the Permanent Representative of the Republic of Artsakh in Australia, Kaylar Michaelian.