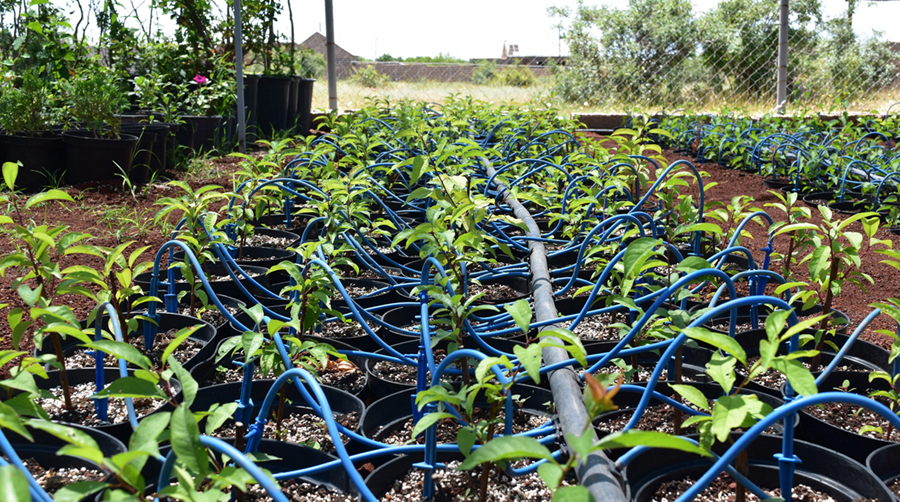 By Jason Sohigian
A major topic of discussion at “Forest Summit: Global Action and Armenia” held in October and co-hosted by Armenia Tree Project and American University of Armenia Acopian Center for the Environment was Armenia’s goal to double its forest cover by 2050. This ambitious goal was announced as part of Armenia’s commitment to the Paris Agreement on Climate Change.
Various estimates were cited during the Forest Summit about the land area and number of seedlings needed to double the forest cover to 20 percent of Armenia’s territory. It is estimated that more than 500 million seedlings will be needed over the next 30 years, in addition to allowing some forested areas to recover through natural regeneration. With numbers so large, the availability of tree seedlings and nursery capacity is a topic of great interest, so one of the panels addressed “Nurseries and Commercial Forestry: Prospects in Armenia.”
Ruben Petrosyan, advisor to the Ministry of Environment’s Forest Committee, explained that Hayantar has one greenhouse and three nurseries under cultivation, which have a total of 800,000 to one million seedlings under cultivation. Overall it was acknowledged that the current nursery capacity is inadequate to achieve Armenia’s goals, and that partnerships will be critical to the success of the reforestation effort.
Hasmik Khurshudyan of the National Agrarian University emphasized the importance of seedling quality to ensure the highest long-term survival rates, and having an adequate variety of tree species available to avoid planting monoculture forests that lack the resilience and biodiversity needed for a healthy ecosystem. Not all seedlings are suitable for all regions, especially for high mountainous zones, so she highlighted the importance of finding new sources of seeds in Armenia’s native forests. Samvel Tamoyan, a PhD candidate at the National Agrarian University, recommended that nurseries should be small and decentralized, in order to provide seedlings that are adapted to local conditions.
Finally, ATP’s Operations Manager Arthur Harutyunyan shared insights from the organization’s work over the past 25 years. Regarding the issue of nursery capacity, Mr. Harutyunyan pointed out that ATP has established four greenhouses and four nurseries in Armenia. Two are located in Central Armenia, one is in the north in Lori, and the fourth is south in Vayots Dzor. The locations were chosen to be near the areas where the trees would be planted, to ensure the highest survival rates. ATP currently has four million seedlings under cultivation, of which one million will be planted in the near future. He also indicated that ATP has ambitious plans for expansion, especially with greenhouse production of seedlings planted in containers.
Other speakers in this panel were Anahit Ghukasyan, director of the Institute of Botany at the National Academy of Sciences, and Ruben Khachatryan, founder of the Foundation for the Preservation of Wildlife and Cultural Assets (FPWC).
The controversial idea to importing millions of pine seedlings has been under discussion in Armenia, since the number of available seedlings is insufficient. In response, ATP published a position paper in January with several recommendations. These included a strong argument against importing and planting non-native seedlings, a recommendation to plant mixed species forests in order to allow a more healthy forest to evolve, and alternative ways of reforesting that don’t solely rely upon container plantings.
In addition to expanding nursery capacity, training specialists was a major theme that came up in this panel. In response, ATP and the National Agrarian University announced a new partnership this year to address this capacity building issue. Students at the university will conduct internships and field research at ATP’s nurseries and greenhouses. A pilot program is being supported by UNDP Armenia.
“The Forest Summit panelists agreed that development of additional nurseries is key to the success of Armenia’s 30-year reforestation program,” noted Executive Director Jeanmarie Papelian. “The current nurseries operated by Hayantar, ATP, and FPWC can’t produce enough seedlings. However, Armenia must first determine how much land is available to plant and where it is located, so we know how many seedlings are needed and which varieties of trees are best suited for the local ecosystem.”
“At present, Armenia does not have a sufficient quantity of high quality seedlings, nor is an acceptable variety available,” added Ms. Papelian. “Armenia also has only one small seed bank, so in some years there are no seeds available for certain species. Therefore, we need a new national seed bank and seed testing laboratories, since healthier seeds will produce healthier trees.”
PHOTO CAPTION: Experts at the Forest Summit agreed that Armenia needs to expand its network of tree nurseries; this photo shows state-of-the-art drip irrigation being utilized at one of ATP’s village nurseries (Photo by Ani Melkonyan)