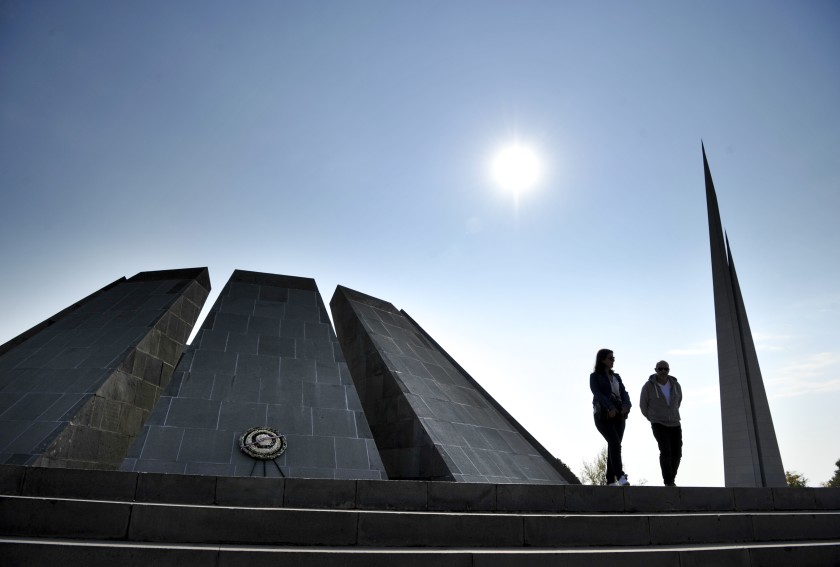 Both events were held within the framework of the project “Ideas & their Consequences: Genocide and International Justice after 1919” co-funded by the Europe for Citizens programme of the European Union, conducted by AGBU Europe in partnership with the Lepsiushaus in Potsdam, the European Union of Jewish Students (EUJS) and the Roma organisation Phiren Amenca.

Rolf Hosfeld, director of the Lepsiushaus in Potsdam, shed light on the background of the 1921 trial of Armenian student Soghomon Tehlirian, who was tried in Berlin for the murder of the former Grand Vizier of the Ottoman Empire and chief perpetrator of the Armenian genocide, Mehmed Talaat.

Entitled “The Rise of International Law: the Talaat Pasha Trial in June 1921”, the lecture, moderated by Roy Knocke, associate lecturer at the University of Potsdam, examined what made this cursory two-day trial of June 2 & 3 turn into a tribunal for the victim’s crimes against humanity.

In his presentation, Hosfeld outlined the extensive contribution of pastor Johannes Lepsius to the preparation of the trial and to the defense line of the accused. Tehlirian who admitted his crime but who also claimed his innocence – “ I killed a man but I am not a murderer ” were his words – was indeed acquitted. As commented by the New York Times following the verdict, “although Tehlirjan’s defense pleaded temporary insanity, his real defense was the horrific past of Talaat Pasha”.

According to Hosfeld, this spectacular trial marked a turning point in the history of international justice. In making apparent the deficiency of international law, it served as a reference to renown figures such as political thinker Hannah Arendt, who cited the trial in her book Eichmann in Jerusalem , and Robert M. W. Kemper (one of the prosecutors at the Nuremberg trial against the Nazis after World War II). This 1921 trial was also Raphael Lemkin’s initial experience, eventually leading him to coin the term genocide in 1944.

Entitled “The Original Sin of 20th Century Europe: (Re)Integrating the Armenian Genocide into European and World History”, the lecture on June 3, by Stefan Ihrig, professor of history at the University of Haifa, pursued the discussion about the history of the 20th century and its dark side in particular, placing the 1915 genocide and its denial at the heart of this narrative.

Organized in partnership with the Memorial de la Shoah in Paris, the lecture was moderated by Claire Mouradian, director of Research Emeritus at the French National Center for Scientific Research (CNRS).

In his presentation, Ihrig emphasised that not only was the Armenian genocide known to the world at the moment it occured, but that it was already used at that time as a reference point and as a warning. He quoted Winston Churchill as an example, who during the war in 1915 argued for the use of poison gas at Gallipoli by citing what was happening to the Armenians as proof that the Turks had forfeited the right to civilized warfare anyway.

Ihrig also described the remarkable public debate about the Armenian genocide that took place in Germany between 1919 and 1923, which the Tehlirian trial in 1921 only intensified. If the German population knew about the extermination of the Armenians, Ihrig explained, certainly the Nazis knew as well. In their publications, he noted that the Nazis mentioned the eradication of the minorities in Turkey quite a few times, as one of the key preconditions of ethnic revival, for the rebirth of Turkey”. Ihrig described how the Nazis glorified the image of a new and modern Turkey as a sort of “post-genocidal wonderland”. Moreover, as Ihrig added, the Nazis knew all too well that the Turks had evaded punishment for genocide, which according to Ihrig set a dangerous, fateful precedent for the world and the rest of the 20th century.

Ihrig’s research led him to conclude that at the very least the Armenian genocide was a momentous warning that was not heeded by the world. “The world knew, but only the wrong people drew the obvious conclusions, once more”. According to the historian, this was indeed the lessons of WW1 drawn by the Nazi: that a nation guilty of large-scale atrocities and even genocide could go unpunished, that it could even get to enjoy the material benefits of its crimes.

Drawing from this conclusion, Ihrig insisted on the absolute necessity for the Armenian genocide to be reintegrated properly into world history. This not only means that the Armenian genocide needs to be recognized worldwide and taught in schools around the world, but that it is necessary to fight for a radically new interpretation of 20th century history which would include the Armenian genocide of the Ottoman Empire into the narratives of WW1 as an important part of that war, while giving along adequate consideration to the chronology of this genocide.

If these first two lectures have made it possible to start rethinking the legacy of WW1 and its impact on the history of the 20th century, this is a reflection that AGBU wishes to encourage and pursue through its European project ” Ideas & their Consequences: Genocide and International Justice after 1919 ” and, in particular, within the framework of an international conference to be held in Berlin this summer.