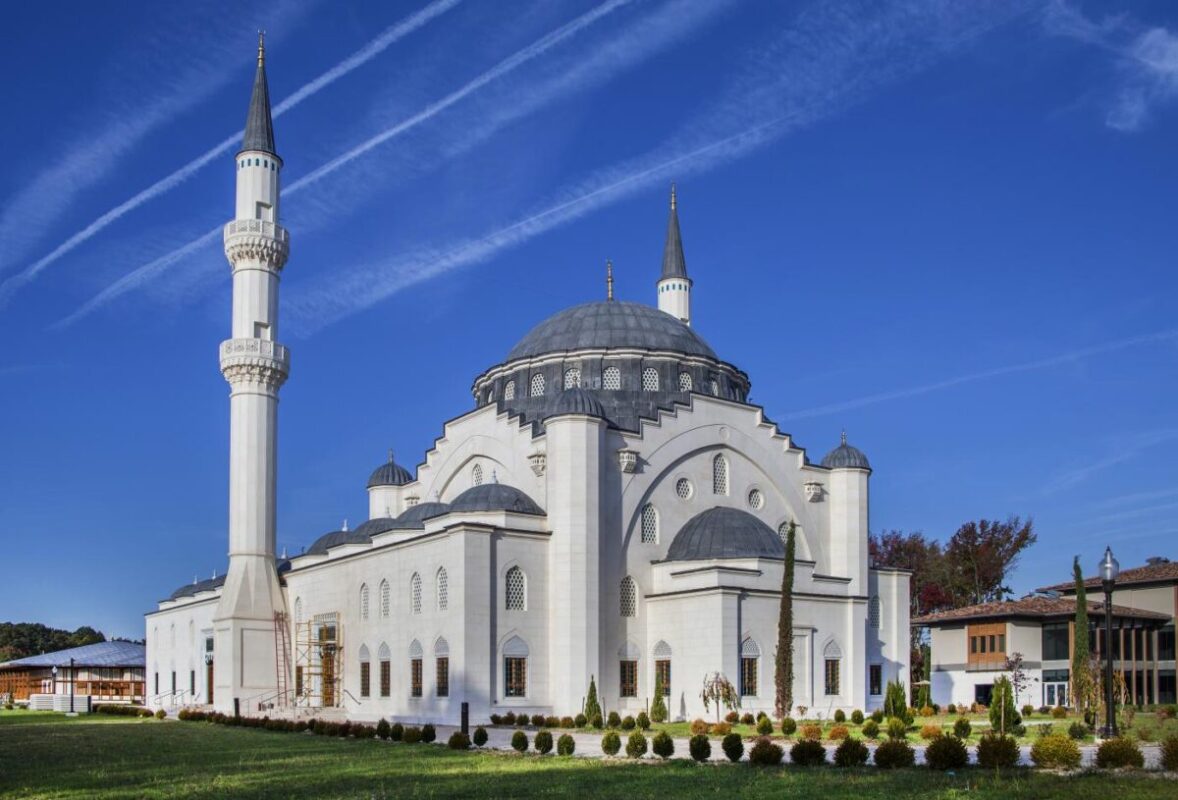 Turkish President Recep Tayyip Erdogan inaugurated one of the largest mosques in the United States in April 2016. It is officially called the Diyanet Center of America (DCA), a massive complex that is located on 17 acres in Lanham, Maryland, just 15 miles from Washington, DC.

Turkey’s Directorate of Religious Affairs (Diyanet) paid $110 million to cover the expenses of constructing the Diyanet Center of America. The DCA, registered as a non-profit in the United States, has $93 million in assets, according to its latest tax return.

This Center is affiliated with Pres. Erdogan and his ruling political party AKP. DCA’s website states that it “works in full coordination with the [Directorate of] Religious Affairs of the Republic of Turkey (Diyanet)” which receives a huge amount of funding from the Turkish government under the title of “Representation and Promotion Expenses,” an odd category for a religious institution. The Diyanet’s annual budget is $2 billion, exceeding that of most Turkish ministries. It is an official governmental institution that directs 85,000 mosques throughout the country and over 2,000 mosques overseas. It prepares a weekly sermon that must be read by Imams in all mosques inside and outside of Turkey. It imposes odd practices on the Turkish public, such as bans “on feeding dogs at home, celebrating the western New Year, lotteries, and tattoos.” The Diyanet’s Imams are instructed by the government’s intelligence services to monitor the activities of members of the Gulen movement and PKK (Kurdish Workers’ Party). The agency has created multiple Diyanet mosques or field offices in countries such as Australia, Belgium, Canada, Denmark, France, Germany, the Netherlands, Sweden, United Kingdom, and United States.

According to Ahmet Yayla, a former senior Turkish police officer, the Diyanet now has thousands of affiliated mosques, dozens of schools, and official councilors assigned in 52 countries. It also maintains “faith attachés” in 38 regions globally. The Diyanet maintains the Turkish regime’s monopoly on religion and has become a mouthpiece for the state’s propaganda efforts.

In his article titled, “Erdogan, the Diyanet, and its Field Office near DC,” published in the Providence Magazine, Adam Smith wrote: “In the West, Diyanet institutions also work with proxies and supporters of other Islamist movements supported by Ankara, such as the Egyptian Muslim Brotherhood…. The Diyanet also demands full endorsement of Erdogan from its partners and congregants, and propagates the idea that all opponents of the AKP are ‘traitors.’ European governments have noticed the Diyanet’s efforts to enforce loyalty to Ankara among European citizens, with Western officials criticizing Diyanet and AKP efforts to ‘conduct political propaganda in their mosques’” outside Turkey.

According to Smith, “the DCA is the head of 28 other Diyanet branches across the United States. Every one of these 28 branches has a president that is unflinchingly loyal to Erdogan and the AKP.”

In Smith’s opinion, “the DCA must be compelled to register under the Foreign Agents Restriction Act, which regulates agents of influence for foreign nations operating on American soil. Turkish Diyanet officials and imams across the US are working for and advancing the interests of a foreign government without ever having registered as foreign agents….” They “zealously pledge allegiance to the AKP…. Across America, these agents consistently campaign for Erdogan’s agenda and aim to proselyte the Turkish regime’s interests. In addition, DCA officials are increasingly involved in efforts to partner with and influence senior American politicians. Erdogan has acknowledged such outreach, even at one point claiming before an American Islamist audience that the AKP regime has directly supported efforts to elect Muslims in America.”

Furthermore, Smith reported that “other Turkish NGOs and various Islamist proxies also play a major role. For example, agents of Erdogan have reportedly established ‘camouflaged shell’ organizations to create a conduit for a ‘problem-free funds-transfer’ in the US, to lobby politicians and move money. Wikileaks documents reveal one Turkish regime operative in the US stating, ‘with this type of structure, funding regulations and tax barriers that limit lobbying activities in the US will be overcome.’”

Smith also claimed that “there is plenty of other evidence of criminal activity linked to the regime and the Diyanet. For instance, two of many of the regime-linked tax-exempt US front organizations, the Turkish Heritage Organization (THO) and Turkish American National Steering Committee (TASC), were under investigation by the FBI, with leaked emails suggesting the group was conducting espionage operations for Ankara. Nonetheless, all these Turkish proxy groups continue to operate with impunity.”

We have no issue with Islamic mosques or Turkish centers in the United States. However, if it is proven that these non-profit institutions are engaging in political activities and lobbying on behalf of Turkey, the U.S. government should take appropriate legal steps to ensure that they are operating within the law.