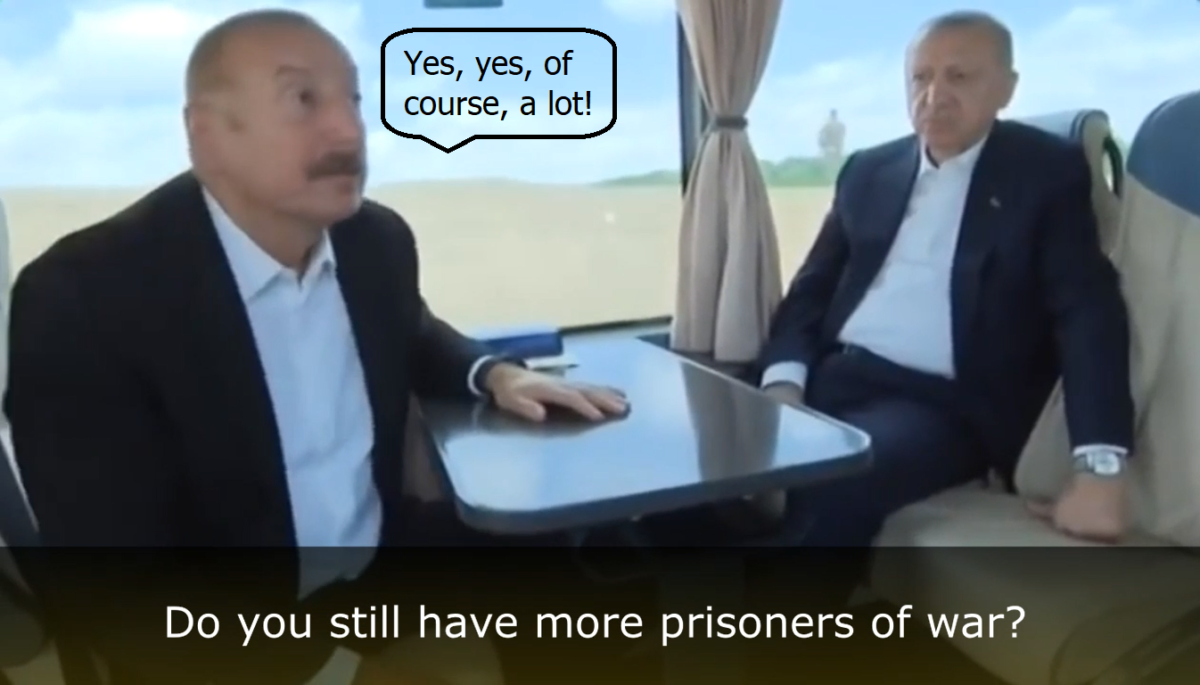 The European Armenian Federation for Justice and Democracy (EAFJD) sent a letter to the EU leaders today drawing their attention to the leaked video of a conversation between the Azerbaijani President Ilham Aliyev, Turkish President Recep Tayyip Erdoğan and his wife proving Azerbaijan’s instrumentalization of Armenian captives.

The Letter was sent to Charles Michel, President of Council of the European Union, Ursula Von der Leyen, President of European Commission and Josep Borrell, High Representative of the Union for Foreign Affairs and Security Policy/Vice-President of the Commission.

The video attests that Aliyev’s and his government’s previous public statements on the non-existence of Armenian prisoners of war in Azerbaijan were false, and explicitly proves Aliyev’s intention of using these captives as mere objects of trade and political bargaining.

Below is the full text of the letter:

A recently leaked video of an informal conversation between the Azerbaijani President Ilham Aliyev, Turkish President Recep Tayyip Erdoğan and his wife not only attests that Aliyev’s and his government’s previous public statements on the non-existence of Armenian prisoners of war (PoWs), captives in Azerbaijan were false, but also explicitly proves Aliyev’s intention of using these captives as mere objects of trade and political bargaining.

In the video (dating to 15 June 2021) one can clearly hear Erdoğan’s wife asking Ilham Aliyev whether they still have more [Armenian] captives. Aliyev responds to this by “yes, of course, it is in the process”. Erdogan’s wife then comments, saying “then return them in portion by portion”, meaning in stages. The whole conversation implies that the Armenian captives and PoWs should be traded for something else.

Despite this irrefutable evidence of the Armenian captives being held as bargaining chips, we remind you of the President of Azerbaijan Ilham Aliyev’s answer to media representatives at press conference on 26 February 2021 and the Minister of Foreign Affairs Jeyhun Bayramov’s statement at press conference on 15 March 2021 where they both emphasised that there were no Armenian captives held in Azerbaijan.

1. illegally keep all Armenian captives as objects for use in political bargaining;

2. continuously mislead the international community by qualifying the captives as “terrorists” or “saboteurs”;

4. commit human trafficking, which is a criminally punishable act, such as the capturing of 6 Armenian servicemen on the sovereign territory of the Republic of Armenia on 27 May;

5. blatantly violate clause 8 of the tripartite ceasefire statement of 10 November , 2020 which stipulates the return of all prisoners of war and captives.

6. deliberately cause continuous suffering to the Armenian captives, prisoners of war as well as their families.

Additionally, we recall the fact that since 11 May 2021, the Azerbaijani forces have encroached onto the sovereign territory of the Republic of Armenia where they still remain illegally, endangering the security of the population in border settlements and generating an atmosphere of fear and intimidation. The US department of State, the French President Emmanuel Macron have urged to pull back all the forces from the sovereign territory of Armenian and cease the provocation. In its resolution adopted by overwhelming majority on 20. May 2021, the European Parliament declared that “the temporary entry of troops from Azerbaijan into the territory of Armenia amount to a violation of the territorial integrity of Armenia and of international law”.

Taking into account all the above-mentioned facts, the resolutions adopted by the European Parliament, as well as by several national parliaments of the EU member states, we a panEuropean grassroots organisation, call on you to:

– use all the leverage at your disposal and put pressure on Azerbaijan to ensure an immediate and unconditional release of all the Armenian captives and prisoners of war, as stipulated by the ceasefire statement of 10 November 2020;

– to stand up against the Azerbaijani encroachment on the sovereign territory of the Republic of Armenia;

– support the creation of a security zone on the border of Armenia with Azerbaijan as an essential prerequisite for a demarcation process which must take place within the framework a comprehensive peaceful settlement, under the auspices of the OSCE Minsk group;

The lives and dignity of human beings should never be an object of trade. The release of the Armenian prisoners of war is a mandatory international requirement, and not an act of goodwill or grace. There is no lasting peace without justice. In order for peace to be sustainable, it has to be viable. As EU citizens we thus call on you to use all the instruments at your disposal to defend the inalienable rights of the indigenous Armenian population of Nagorno Karabakh and to ensure the realisation of the above-mentioned objectives which are a minimal prerequisite for starting any viable peace-process.