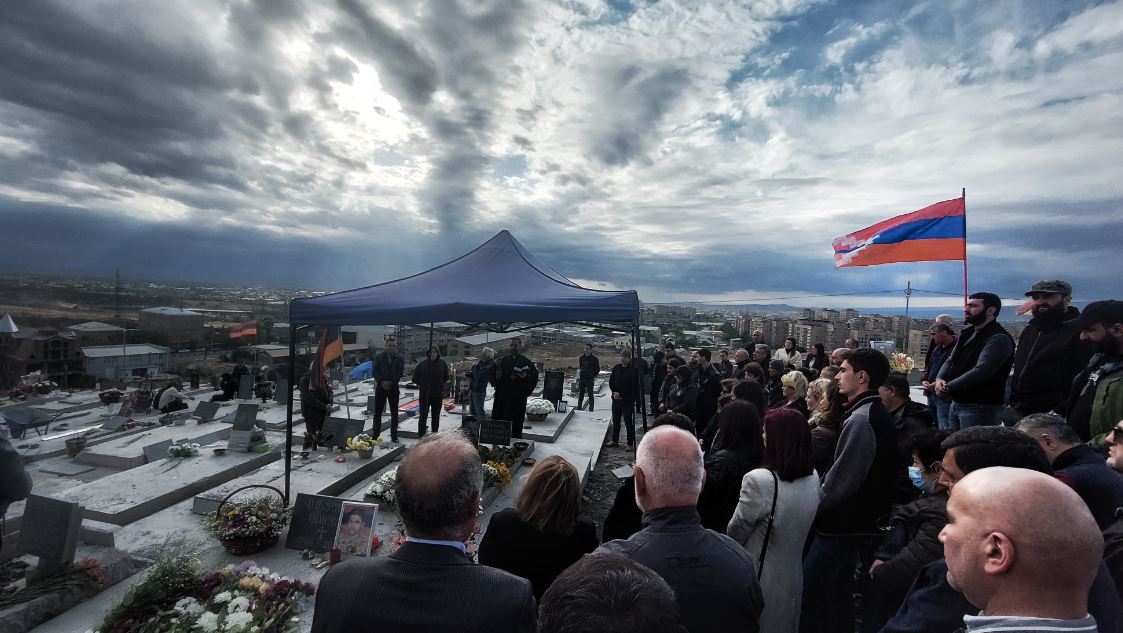 What did we do?

How did we get here?

Perhaps it would be more appropriate to ask: “What did we not do?”

We didn’t do what we should have when we had the chance. Instead, we did what we ought not to have done.

We got drunk with joy. We rode on each other’s shoulders, proudly waving our flags of three bands. We sang at the top of our lungs, we drank toasts, we waxed poetic from our soapboxes, and danced shoulder to shoulder. We reached the heights of Ararat through our chants—we reached Mush and Sasun. We held each other and danced a half-decent Kochari1.

And then? Then, we—young and old, everywhere —looked the other way at the faults mounting. We turned a blind eye to criminals, scoundrels, bribe-takers, halfwits, xenomaniacs, the dishonest, liars, and spineless thugs who don’t have an ounce of national dignity. We ended up with a bunch of unpatriotic operatives who appeared under the guise of democracy.

Time, we gave, and in the process, handed our brightest to the earth, where they rest under the shadows of tricolors, barely flailing.

We didn’t see; we didn’t want to see. We preferred to dream. We were in love.

If we saw, then only with half an eye; the rest we judged with our hearts only.

We didn’t raise our voices. And if we did, they were laced with curses, with arrogance. We uttered beautiful but empty words. We became self-interested.  And if we didn’t, we disappeared silently or buried our thoughts and fears in our pens. We didn’t listen to one another.

We didn’t appreciate the meaning of unity. We chanted “becoming a fist makes Armenia eternal,” just as easily as we say, “Tsavt tanem” [“I will take your pain”].

We didn’t learn. We didn’t learn from our mistakes. Some of us forgot for a second that the Turk is a Turk. Some forgot about the world’s unwritten rules. They were stupefied with velvet illusions.

We raised our voice of protest before foreign tribunals. We waited in vain for (at the very least) the Christian world to take action. We still haven’t learned that we are our only salvation. But where are we? “We” is only in our books and sometimes on our lips. “We” doesn’t exist otherwise.

We didn’t nurture thinkers. We didn’t build. And if we did, we only built lavish avenues. We didn’t build a system to strengthen our statehood. We buried ourselves in our glorious past and rested on our laurels.  We chose the mainstream, while slowly enervating anything and everything that was patriotic. We preferred to be like others rather than to stand out. ‘’Don’t mix us with…’ we recited; we spoke of the evils of assimilation, all the while doing just that: assimilating.

We let them take us apart. Yes, we let them.

We cried “free, independent, and united homeland” at the top of our lungs—many of us were raised in that spirit. And with that dream in our souls, we encountered the bitter truth that lies before us: the remnants of a captive, helpless, fragmented homeland; one that our “neighbor” is ready to strike with a deadly blow at any time.

We spoke about repatriation, but only in passing. We expected it of others, but never set the foundation. We never developed a strategy to make it actually happen. We took whimsical and clumsy steps trying to engage the Diaspora. We didn’t understand that the generation of Genocide survivors was in search of its Armenian nation.

We didn’t appreciate the value of independence. We didn’t keep the spirit of May 28 alive. We wrote off our statehood.

Our forebears, who barely survived annihilation, gave their everything to keep the Armenian home Armenian. “Sis and Masis”6 have been on our lips from the get-go. And now? In our once-again-independent country, we have presented this centuries-old sacred Armenian hearth to the beasts. We have become beggars on our own land. We have become slaves.

We didn’t have a sense of priority. We plunged into a muddy maelstrom of lies, deception and materialism. We disgraced our age-old, glorious nation, and made new cuts in an already gaping wound.

We were tolerant and preached humanity, while bloodthirsty beasts had their fangs to our necks. Instead: we should have been the ones “sharpening our fangs and hooked swords,” like Davtian7 had once written.

We trampled on and degraded our national values. We turned our righteous flag—our tortured and battered tricolor—into a tattered rag. We robbed the next generation of a future as we tried to “solve” our nation’s existential threats on social media.

We didn’t prepare far-sighted leaders who had a sense of national dignity. We didn’t make a commitment to keep the homeland strong. We didn’t cultivate tomorrow’s diplomats. We got lost in the small stuff and entrusted the future of our homeland to others. We lack a national vision. We lack a national strategy. We search for small rays of sunshine in the dark and cling to them for dear life.

Can we revive the spirit of Sardarapat?8 Can we wake up at last and do away with this slave mentality? Can we be honest with ourselves? Be the master and servant of our homeland?

Only then will we have the right to mix our tears with the soil of Yerablur.9

Otherwise, our martyred sisters and brothers, don’t forgive us.

Translated by Rupen Janbazian from the original Armenian, first published in the Horizon Weekly on Oct. 3, 2021

1 Kochari is a folk dance originating in the Armenian Highlands. Each region in the Armenian Highlands had its own Kochari, with its unique way of both dancing and music.
2 Daniel Varujan was an Armenian poet of the early 20th century. At the age of 31, he was deported and murdered by the Ottoman authorities during the Armenian Genocide.
3 Shavarsh Narduni was an Armenian writer and publisher born in the Ottoman Empire in 1896. He died in Marseille in 1968.
4 Hayreniki vokin («Հայրենիքի ոգին») and Karmir hoghuh («Կարմիր հողը») are both poems written by Daniel Varujan.
5 Hayastan amen baneh ver («Հայատան ամէն բանէ վեր») is written by Shavarsh Narduni.
6 The peaks of Mount Ararat are sometimes referred to as Sis (Lesser Ararat) and Masis (Greater Ararat).
7 Vahagn Davtian was an Armenian poet, translator, publicist and public activist born in Arabkir, Turkey. He spent most of his life in Soviet Armenia.
8 The Battle of Sardarapat (May 21–29, 1918), fought between regular Armenian military units and militia on one side and the Ottoman army that had invaded Eastern Armenia on the other, not only halted the Ottoman advance into the rest of Armenia, but also prevented the complete destruction of the Armenian nation.
9 The Yerablur Military Pantheon is a military cemetery located on a hilltop in the outskirts of Yerevan. Since 1988, Yerablur has been the burial place of Armenian soldiers who have lost their lives during the Artsakh War.