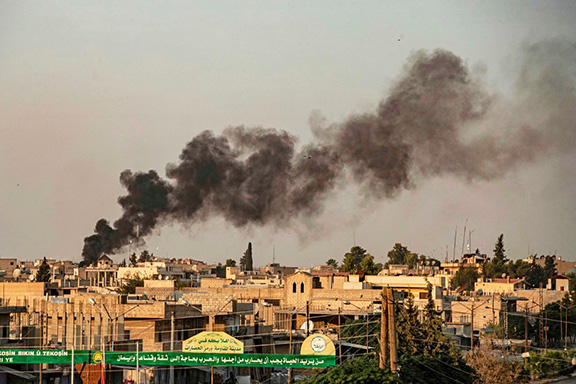 In a statement, the Kurdish-led Syrian Democratic Forces issued a public mobilization call.

“We are and we have to be prepared for the worst,” SDF spokesperson Mustafa Bali told NBC News. “The situation on the border is like a volcano and can explode at any moment.”

Ahead of launching the airstrikes, Turkey amassed tanks and heavy military equipment and personnel amassing on the Turkey-Syria border with the aim, according to Erdogan, “to prevent the creation of a terror corridor across our southern border, and to bring peace to the area.”

Erdogan’s plan of ridding the area of its predominantly Kurdish population is to resettle the majority of the more than three million Syrian refuges that have taken shelter in Turkey.

Erdogan’s plan was hastened Sunday when President Donald Trump removed all American forces from the area and green lighted the attack. The U.S. forces were working with the the SDP-affiliated YPG (People’s Protection Units) in the area against the Islamic State.

In a statement, Trump said the U.S. did not “endorse this attack,” adding that he had told Turkey that the operation was a “bad idea.” A day after sanctioning Erdogan’s plans, Trump threated to “obliterate” Turkey’s economy if it went “off limits.” Trump said he expected Turkey to protect civilians and religious minorities and to prevent a humanitarian crisis, he said.

While predominantly a Kurdish-populated region, the area is home to many other Christian minorities, including Armenians. The mainly Armenian-populated city of Aleppo is approximately 60 miles from the Turkish border.

“The ANCA continues to engage with Administration and Congressional stakeholders, coalition partners, and Armenian community leaders in the region regarding the profoundly dangerous impact of the Trump Administration’s ill-advised decision to abruptly withdraw forces from northeast Syria, inviting a Turkish invasion that is already targeting Kurds and also Armenians and other at-risk Christian, Yazidi, and Muslim populations,” said Armenian National Committee of America Executive Director Aram Hamparian in a statement released immediately following the Turkish strikes.

“Mindful of the continuing consequences of the Armenian Genocide – including those directly threatening the remaining Western Armenian populations in northeast Syria – we join with Senators Lindsey Graham, Chris Van Hollen, and others – from both houses of Congress – in supporting bipartisan legislation imposing the harshest sanctions on Turkey for attacks upon America’s Kurdish allies or civilian populations,” added Hamparian.

Amid the ongoing political tensions in Washington over the Democratic-led impeachment proceedings against Trump, Congressional Republicans increasingly voiced their opposition to Turkey’s attack on northern Syria.

Close Trump ally Senator Lindsey Graham, a Republican from South Carolina, said he would lead an effort in Congress to “make Erdogan pay a heavy price,” adding: “Pray for our Kurdish allies who have been shamelessly abandoned by the Trump Administration.”