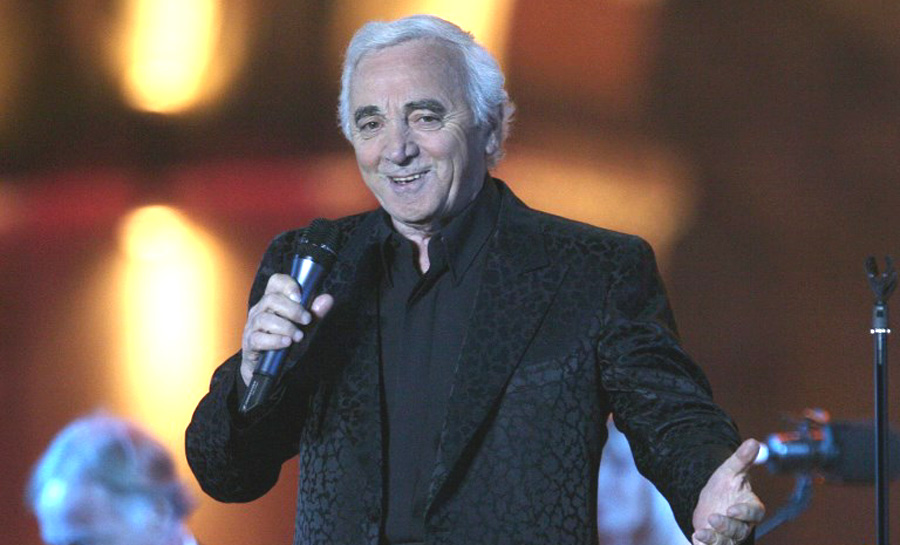 (Armradio) – The legendary French Armenian singer, who wrote more than 800 songs, recorded more than 1,000 of them in French, English, German and Spanish and sold over 100 million records in all, was born Chahnour Vaghinag Aznavourian on May 22, 1924, in Paris. He was the younger of two children born to Armenian immigrants who fled to France.

He took his first theatrical bow in the play “Emil and the Detectives” at age 9 and within a few years was working as a movie extra. He eventually quit school and toured France and Belgium as a boy singer/dancer with a traveling theatrical troupe while living the bohemian lifestyle.

A popular performer at the Paris’ Club de la Chanson, it was there that he was introduced in 1941 to the songwriter Pierre Roche. Together they developed names for themselves as a singing/writing cabaret and concert duo (“Roche and Aznamour”).

A Parisian favorite, they became developed successful tours outside of France, including Canada. In the post WWII years Charles began appearing in films again, one of them as a singing croupier in Goodbye Darling (1946).

Eventually Aznavour earned a sturdy reputation composing street-styled songs for other established musicians and singers, notably Édith Piaf, for whom he wrote the French version of the American hit “Jezebel”. Heavily encouraged by her, he toured with her as both an opening act and lighting man. He lived with Piaf out of need for a time not as one of her many paramours..

My shortcomings are my voice, my height, my gestures, my lack of culture and education, my frankness and my lack of personality.
Charles Aznavour

In the late 50s, Aznavour began to infiltrate films with more relish. Short and stubby in stature and excessively brash and brooding in nature, he was hardly leading man material but embraced his shortcomings nevertheless. Unwilling to let these faults deter him, he made a strong impressions with the comedy Une gosse sensass’ (1957) and with Paris Music Hall (1957). He was also deeply affecting as the benevolent but despondent and ill-fated mental patient Heurtevent in Head Against the Wall (1959).

Dubbed the “Frank Sinatra of France” and singing in many languages (French, English, Italian, Spanish, German, Russian, Armenian, Portuguese), his touring would include sold-out performances at Carnegie Hall (1964) and London’s Albert Hall (1967).

Aznavour’s chart-busting single “She” (1972-1974) went platinum in Britain. He also received thirty-seven gold albums in all. His most popular song in America, “Yesterday When I Was Young” has had renditions covered by everyone from Shirley Bassey to Julio Iglesias. In 1997, Aznavour received an honorary César Award. He has written three books, the memoirs “Aznavour By Aznavour” (1972), the song lyrics collection “Des mots à l’affiche” (1991) and a second memoir “Le temps des avants” (2003). A “Farewell Tour” was instigated in 2006 at age 82 and, health permitting, could last to 2010.

Aznavour sang for presidents, popes and royalty, as well as at humanitarian events. In response to the 1988 Armenian earthquake, he founded the charitable organization Aznavour for Armenia along with his long-time friend impresario Levon Sayan.

In 1989  Charles Aznavour composed a song “Pour toi Arménie,” which was recorded by a group of French singers popular at the time. This charity single was intended to raise funds to help the Armenians who experienced the 1988 Spitak earthquake. It sold more than 1 million copies.

In 2009 Aznavour was appointed Armenia’s Ambassador to Switzerland.

“First I hesitated, as it is not an easy task. Then I thought that what is important for Armenia is important for us. I have accepted the proposal with love, happiness and feeling of deep dignity,” Aznavour said.

Charles Aznavour was laid to rest in the family vault outside Paris after a private funeral at the city’s St John the Baptist Armenian cathedral.