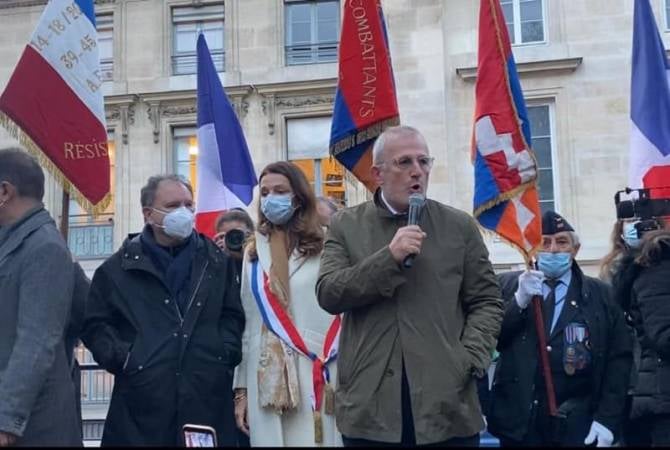 A resolution calling for the recognition of Artsakh has been introduced in France’s National Assembly—lower house of parliament—reported the Armenian National Interests Fund on Wednesday.

ANIF has coordinated efforts with its French partners to on the introduction of the measure, the fund’s executive director Davit Papazyan told Armenpress. The fund was established as an Armenia-based organization to encourage French investment in Armenia.

“For 10 days we have been working with former prime minister of France Dominique de Villepin (member of ANIF board of director), local reporters, members of parliament, explaining to them what has been happening in the Artsakh-Azerbaijan line of contact since September 27. We have also presented Turkey’s role and engagement of mercenaries which completely changes the picture,” Papazyan said.

“We have explained that the only real political avenue for the settlement [of the conflict] is the recognition of the independence of Artsakh by the international community. And as members of the French Parliament quickly understand the reality, the bill has entered into the National Assembly of France today in the morning,” explained Papazyan.

“Since the start of hostilities, the activities of the Armenian National Interests Fund have generally been aimed at protecting the people of Artsakh. This is an important step but only the first one. We will proceed with the same consistency,” ANIF said in a statement.

ANIF expressed gratitude to its French partners who, through their pro-Armenian initiatives, consistently support the settlement of the Karabakh conflict and the restoration of justice. “We would like to extend a special thank you to Socialist Party member François Pupponi, who was the first to sign the bill,” the statement said.

More than 7,000 French-Armenians gathered in front of the French National Assembly building on Tuesday evening local time demanding the recognition of Artsakh.

During the protest, Pupponi, the Socialist Party lawmaker said that the resolution could be discussed by the legislature.

“As a member of Parliament I will continue to take all possible measures. As of tomorrow (October 14 – Ed.) I will submit a resolution co-signed by several deputies so that our national representation votes for the recognition of Artsakh and the right of Armenians to live on their land. In ten days or so I will be leading a delegation to Armenia to show France’s support and friendship,” the deputy wrote.

“Make no mistake: what is at stake in Artsakh is much more than the fate of a territory, it is the stability and religious diversity of an entire region. Let’s not let [Azerbaijani President Ilham] Aliyev and [Turkish leader Recep Tayyip] Erdogan continue what started in 1915 (the Armenian Genocide – Ed.). Let’s not leave the Armenians alone against Azerbaijan and Turkey,” added Pupponi.