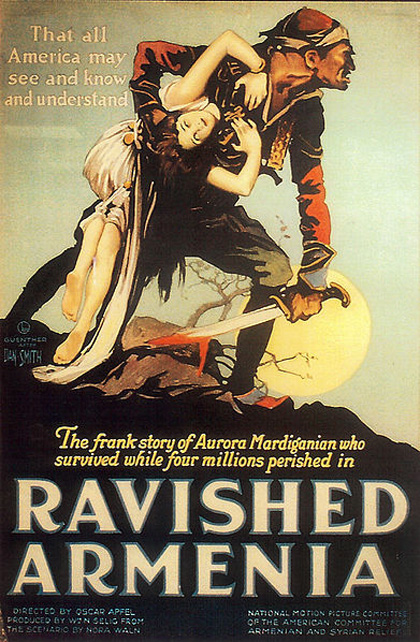 When the American-made motion picture Ravished Armenia was released in 1919, it became the first film to tell the story of the World War I Armenian Genocide through the eyes of a survivor, Aurora Mardiganian. Directed by Oscar Apfel and produced by early film pioneer Colonel William Selig, the eight-reel silent film was commissioned by the American Committee of Armenian and Syrian Relief (ACASR). The ACASR was established in the United States in 1915 in order to provide aid to victims of the Genocide. ACASR spokesperson Oliver Harriman, explained that the purpose of the movie was to acquaint viewers with ‘ravished Armenia’ and ‘to visualize conditions so that there will be no misunderstanding in the mind of any one about the terrible things which have transpired.’ The ‘screen was selected as the medium,’ she added, ‘because it reached the millions, where the printed word reaches the thousands.’

Ravished Armenia became a huge success with screenings throughout the United States, Europe, South America and as far away as Australia. To illustrate its ability to generate publicity and money for Armenian relief, ticket prices for its packed 12-day New York screenings were $10 each (about $150 in today’s terms) with the theatre’s seating capacity at approximately 1000 people. When the film premiered in Sydney on January 10, 1920, it drew such a strong crowd that ‘many hundreds’ had to be turned away.

While only one reel has survived, a book titled The Auction of Souls: The Story of Aurora Mardiganian, first published in 1918, supplies the screenplay. It opens in an Anatolian village on Easter Monday 1915 with the large Mardiganian family preparing for the forced deportation. On the road, Aurora is continuously molested; she ultimately apostatised in order to save her mother, but to no avail. At a certain point during the exodus, 16 girls in the caravan are ‘crucified’ on crude crosses—the most sensational scene in the film. Aurora is finally rescued and taken to Russia, where she embarks on a Norwegian ship for the United States. According to film historian Leshu Torchin, it was the first motion picture ever made explicitly as a work of advocacy for humanitarian relief.

Since the discovery of one of the film’s reels in 1994, a plethora of articles and books have been published analyzing the movie’s importance to American film and humanitarian history—most notably the 1997 revised edition of Ravished Armenia edited by prominent American film historian Anthony Slide. However, it may come as a surprise to many, that Ravished Armenia was not the first film to be made in America which told the story of Armenian suffering. There was another.

As many historians know, the World War I era genocide of Armenians was not the first case of systematic large-scale massacres of Armenians. Between 1894-1896, tens of thousands of Armenians were massacred in the Ottoman Empire during the reign of the Ottoman Sultan Abdul Hamid II. The scholar Daniel Goldhagen has observed that ‘the massive eliminationist assault against the Armenians from 1894 to 1896 would rightly be called the Armenian Genocide – had an even more massive mass murder … not followed twenty years later.’

One of the worst massacres occurred in the capital of the Empire, Constantinople (today’s Istanbul). A group of armed Armenians seized the Ottoman Bank in Constantinople on August 26, 1896 and threatened to blow it up unless their political demands were met. They gave in after holding the bank for thirteen hours; all they obtained was free passage out of the country. As they left, Ottomans loyal to the government, armed by the Sultan, went on a rampage and slaughtered thousands of Armenians on the streets of the capital, under the noses of the foreign ambassadors. In the two days of slaughter, an estimated 5000 to 6000 Armenians were killed. The event was widely publicized in the American and European press, sparking outrage among civic, political and religious leaders throughout the world.

In July 1901, the Edison Manufacturing Company (EMC) released a silent black and white 35mm film about the atrocities entitled Massacre at Constantinople. The EMC was founded in 1894 by Thomas Edison—regarded by many as America’s greatest inventor. Some of his inventions include the phonograph, the motion picture camera and the long-lasting light bulb. Raised in America’s midwest, he built his first production company in West Orange, New Jersey in 1892. His second facility was built at 41 East 21st Street in Manhattan entertainment district in 1901. Some of the EMC’s most notable productions included The Great Train Robbery (1903), Alice’s Adventures in Wonderland (1910), the first Frankenstein film in 1910 and the first ever serial made in 1912 titled What Happened to Mary.

While no script, photos or reels of EMC’s film Massacre at Constantinople are known to have survived, the EMC’s film catalogue for that year provides the following description: “… showing a number of ferocious Turks tearing down the doors of an Armenian residence. They drag forth the occupants, consisting of men, women, and little children, butcher them with long knives, and then, after looting the house of all its valuables, they set it [sic] fire to it.” The duration of the motion picture is unknown but according to IMDb, the length of the reel’s film measured 19.8 meters. It can be argued that Massacre at Constantinople was America’s first film on the mass killing (what we call genocide today) of Armenians to mainstream audiences.

Today, we know much more about Ravished Armenia than its predecessor film Massacre at Constantinople. It is my hope that this article will help spark some interest in the 1901 film, so that further light can be shed upon its content and impact on film history.