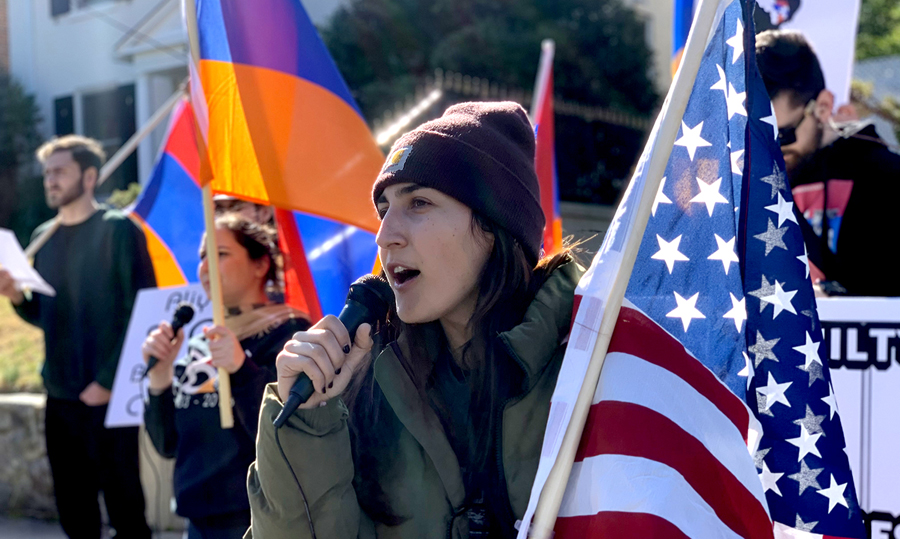 WASHINGTON, DC – Armenians young and old from the Washington DC area joined the Armenian Youth Federation’s (AYF) Ani Chapter at the Azerbaijani Embassy today to demand justice for Azerbaijani violence – past and present – and promote Artsakh’s security as a free and independent republic.

“The AYF and our community will be out here every year to honor the victims of the anti-Armenian pogroms in Sumgait, Kirovabad, Maragha, and Baku, demanding recognition and reparations for these crimes,” said AYF-YOARF Washington DC Ani Chapter Chair Alex Manoukian.  “President Aliyev’s ongoing threats and attacks are proof positive that there is no going back – that Artsakh’s safety and security can only be guaranteed by its independence or reunification with the Armenian Homeland.”

Protesters marked the 30th anniversary of the Baku pogroms – the Azerbaijani government instigated week-long rape, torture, and murder of the city’s Armenian population. As a result, hundreds of Armenians were killed or injured and thousands fled the systematic violence. Shouting “We Remember Baku,” protesters commemorated the victims of this horrific event that is still denied by Azerbaijan.

Community members proudly waving Artsakh flags and holding signs supporting fellow Armenians who fight every day to protect and defend Armenian lands, also expressed concerns about increasing pressure on the Republics of Armenia and Artsakh to support the flawed “Madrid Principles.” Greater Washington DC Armenian community members were loud and clear in their message that the only pathway to long-term peace is one that respects the right to self-determination of the people of Artsakh.

Following the vigil, Fr. Sarkis Aktavoukian of Soorp Khatch Armenian Apostolic Church led the D.C. community members in prayer in memory of the victims of the Baku, Sumgait, Kirovabad and Maragha massacres, and all those who lost their lives during the Artsakh liberation movement.

While members of the community were protesting against Stalin’s decision to gift Armenian Artsakh to Azerbaijan, the National Gallery of Art was hosting a screening of Zangezur, a 1938 Soviet film by Hamo Bek-Nazaryan, that was co-sponsored by the Armenian Embassy. This Stalinist film praises the Bolsheviks who enforced Soviet power in Zangezur and demonizes Armenian Youth Federation founder and Armenian national hero General Karekin Njdeh and the Armenian Revolutionary Federation, who fought for Armenian self-determination.

The protest was streamed live by the Voice of America Armenian Service as well as the AYF Eastern Region and ANCA Facebook pages and covered by H1 Television.

Excerpts of video and photos from the protest are available on the AYF Washington DC Ani Chapter Facebook page at the following links: