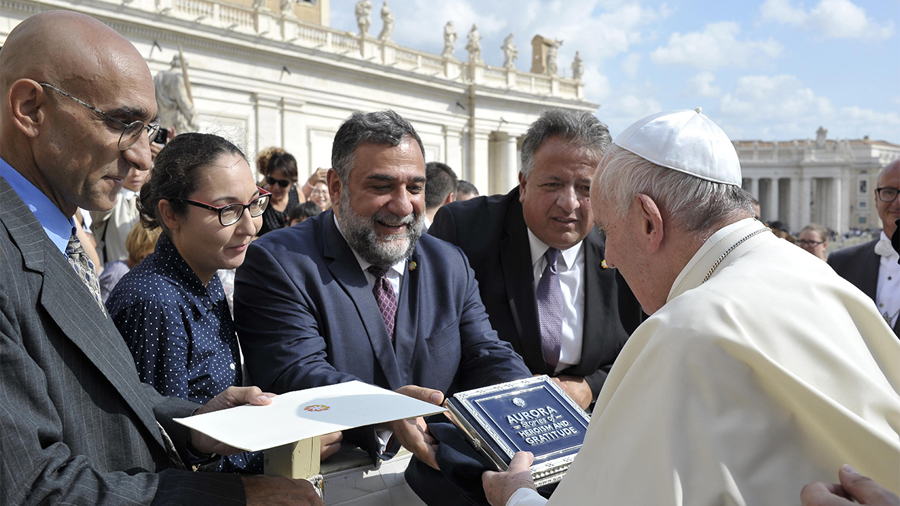 On October 2, a delegation from the Aurora Humanitarian Initiative received a special blessing from His Holiness Pope Francis during their visit to the Vatican. The visit was part of a wider trip from the group to Rome, during which a series of meetings with Vatican and community leaders was held.

The trip to the Vatican was attended by Noubar Afeyan and Ruben Vardanyan, the Co-Founders of the Aurora Forum and noted social entrepreneurs, as well as by the three previous Laureates of the annual Aurora Prize for Awakening Humanity: Tom Catena, Marguerite Barankitse and Kyaw Hla Aung. In addition, the group also met with His Eminence Cardinal Pietro Parolin, Secretary of State to the Holy See.

During their conversation with Pope Francis, the group sought his blessing for the Aurora Humanitarian Initiative as it continues its global efforts in combating poverty, improving healthcare, and providing education to vulnerable communities. Likewise, the group also highlighted the Initiative’s newly launched fund-raising drive, the #AraratChallenge, which aims to inspire others to join the Aurora mission by sharing stories of personal gratitude, making donations, and getting involved with humanitarian causes.

Commenting on the meeting with His Holiness Pope Francis, Noubar Afeyan, Co-Founder of the Aurora Humanitarian Initiative and the Aurora Forum, said: “We are honored to have received a special blessing from His Holiness earlier this morning. Driven by our commitment to spreading our message of Gratitude in Action and to maximizing its impact, it is important that we build closer relationships with religious, governmental, private sector and cultural leaders from across the world. Today’s meetings at the Vatican have allowed us to highlight the vital work being done globally by the Aurora Humanitarian Initiative, and the need for greater collaboration as we expand these efforts in the long-term.”

Remarking on the audience with His Holiness Pope Francis, Ruben Vardanyan, Co-Founder of the Aurora Humanitarian Initiative and the Aurora Forum, said: “Today’s meetings with His Holiness Pope Francis and His Eminence Cardinal Parolin were an opportune time to take stock and reflect on the impact the Aurora Humanitarian Initiative has had globally since its founding. However, our work has only just begun. We look forward to discussing new challenges and opportunities that humanity faces at the inaugural Aurora Forum later this month in Yerevan.”

Founded on behalf of the survivors of the Armenian Genocide and in gratitude to their saviors, the Aurora Humanitarian Initiative is a globally-focused organisation which seeks to empower modern-day saviors to offer life and hope to those in urgent need of basic humanitarian aid anywhere in the world and thus continue the cycle of giving internationally.

Also speaking on the meeting, Tom Catena, Chair of the Aurora Humanitarian Initiative and the 2017 Laureate of the annual Aurora Prize for Awakening Humanity, added: “Since joining the Aurora community in 2017, it’s been a privilege to see first-hand the incredible work being done by our organisation all around the world. As a Catholic Missionary, it was an honor to meet His Holiness Pope Francis during this visit. I’m incredibly excited for the Aurora Forum later this month, during which we’ll be sharing ideas on such work with leaders in various industries from all across the world. It is by collaborating with thought leaders and experts, as well as the contributions and support of grass-roots individuals and organisations, that we can continue our work in the long-term.”

In less than two weeks’ time, the inaugural Aurora Forum will take place in Yerevan, Armenia on October 14-21, 2019. The Forum will bring together the world’s leading authorities and thought leaders on social, scientific-technological, educational, and humanitarian innovation. Through the Forum, this network of remarkable individuals aims to drive practical action and change relating to some of the world’s most pressing challenges and opportunities.