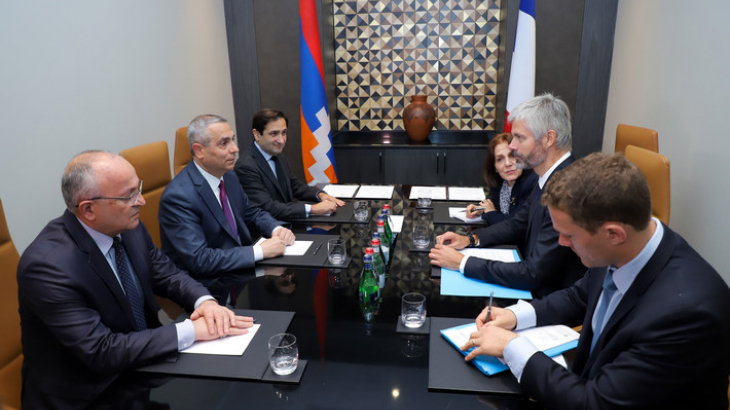 Foreign Minister of the Republic of Artsakh Masis Mayilian met in Yerevan with President of the Regional Council of Auvergne-Rhône-Alpes of the French Republic Laurent Wauquiez.

Masis Mayilian presented the foreign policy priorities of Artsakh, in particular, touched upon the establishment of cooperation with the administrative units of foreign states, noting its importance in terms of unimpeded realization of the fundamental rights of the citizens of Artsakh, effective activity of Artsakh communities and involvement of the Republic in international processes.

The sides signed a joint Declaration, which, in particular, reads that the isolation of the people of Artsakh impedes the exercise of their fundamental rights and freedoms and contradicts the spirit of freedom, equality and co-operation, without which the establishment of lasting peace in the region is impossible.

The sides underline the importance of international cooperation in terms of promoting the peaceful coexistence and friendship between peoples, open-mindedness and tolerance, as well as economic prosperity.

In the Declaration, the sides also touch upon the peaceful settlement of the Azerbaijan-Karabakh conflict, in particular, express confidence that the re-involvement of the authorities of Artsakh in the negotiation process under the auspices of the OSCE Minsk Group Co-Chairmen will create more favorable conditions for increasing the efficiency of the process of peaceful settlement of the Azerbaijan-Karabakh conflict.

The sides express their readiness to encourage all the steps that enable the exercise of the right to self-determination by the people of Artsakh and are aimed at promoting peace, stability and friendship between peoples within the framework of international law, in particular, through the implementation of education and economic development programs. In this context, the sides express their support for the initiatives at the level of local self-government bodies of Artsakh and France.

Mayors of a number of cities of Auvergne-Rhône-Alpes region also joined the Declaration.