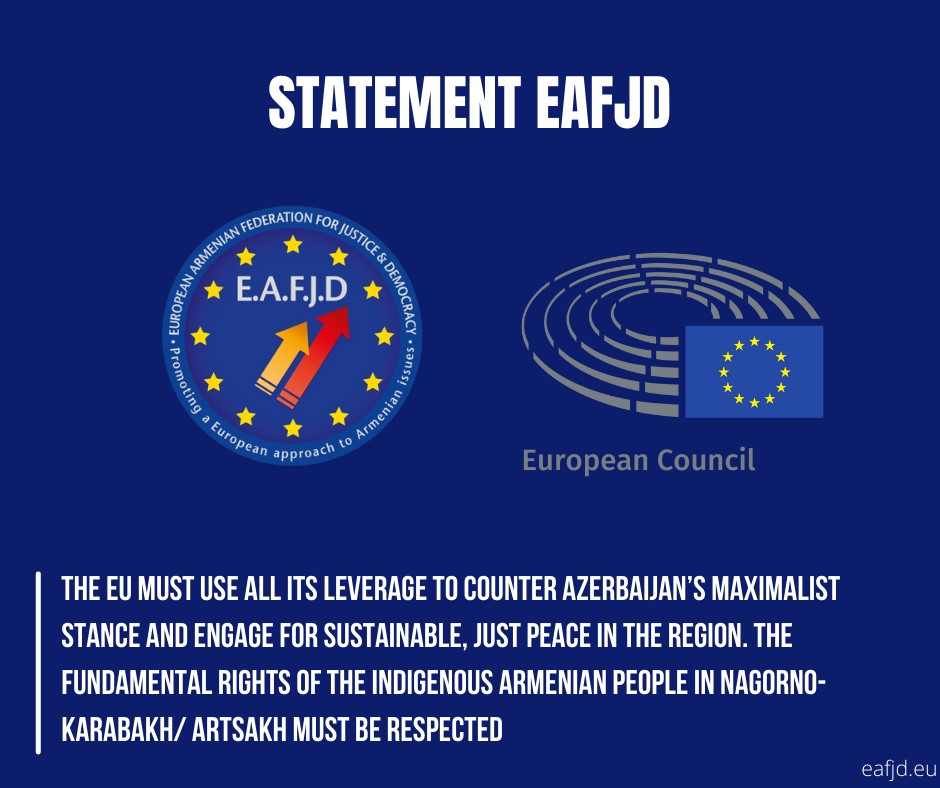 Artsakh (Nagorno-Karabakh) can never be a part of Azerbaijan, the European Armenian Federation for Justice and Democracy (EAFJD) said in a statement on Sunday, ahead of the meeting of the Armenian and Azerbaijani leaders in Brussels. The full text of the statement is provided below.

In March 2022, Azerbaijani forces took control of the Armenian-populated Parukh village in the Askeran region of Nagorno-Karabakh as a result of which all the Armenian residents had to flee. Because of the Azerbaijani provocations, the entire Armenian population of the neighboring village of Khramort also had to be evacuated.

Azerbaijan is realizing an ethnic cleansing on the native Armenian population of Nagorno Karabakh/Artsakh and has been pursuing a policy of Armenophobia on state-level for decades. Azerbaijani Armed Forces have illegally invaded Armenian sovereign territory since May 2021 without carrying consequences for violating international law.

• That the European Parliament (EP) adopted a resolution on 10 March raising serious concerns about the danger of ethnic cleansing of the native Armenian population of Nagorno Karabakh, while condemning the destruction of Armenian cultural and religious heritage in Nagorno-Karabakh;

• That the negotiations regarding the Nagorno-Karabakh conflict should be under the auspices of the OSCE Minsk group Co-chairs, with the consideration of the Basic principles, including the right of the native Armenian population of Nagorno-Karabakh/ Artsakh to self-determination;

• That any process of delimitation and demarcation between Armenia and Azerbaijan cannot be imposed by the use of force, violation of human rights, at the expense of the national security of Armenia and predetermine the status of Nagorno-Karabakh fulfilling Azerbaijani claims;

• That Armenian POW’s and captives remain imprisoned despite multiple calls by different governments, transnational organizations and the adoption of the resolution by EP on the immediate and unconditional release of the Armenian POW’s;

• That a war unleashed by the authoritarian regime of Azerbaijan with the support of Turkey cannot lead to imposing any transport connection with a special status through the territory of the Republic of Armenia, at the expense of its national security and economic interests;

Taking the abovementioned into consideration, Nagorno-Karabakh/Artsakh can never be a part of Azerbaijan.

The EU must use all its leverage to counter Azerbaijan’s maximalist stance and engage for sustainable, just peace in the region. The fundamental rights of the indigenous Armenian people in Nagorno-Karabakh/ Artsakh must be respected. Peace cannot be established by giving in to Azerbaijan’s ambitions of ethnic cleansing against Nagorno-Karabakh’s/ Artsakh’s native Armenian population.”