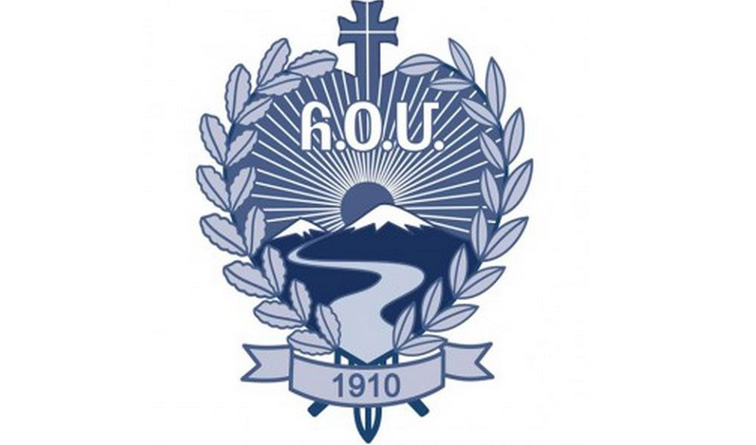 International Women’s Day is celebrated every year on March the 8th. It is a day celebrated by all women around the globe. The United Nations theme for this year’s observance is “Gender equality today for a sustainable tomorrow.” The theme was put in place for “achieving gender equality in the context of climate change, environmental and disaster risk reduction, all which effect the greatest global challenges of the 21st century.”

The ARS Montreal “Sosse” and Laval “Shoushi” chapters marked the day on Sunday March 13, 2022. This year, like last year, the committee celebrated the day online with invited guest speakers for a roundtable discussion about the “Armenian Women in the Diaspora and the Preservation of the Armenian Identity,” a theme inspired from the 2022 decree, by his holiness Catholicos Aram 1, Catholicos of Cilicia who announced the 2022 “Year of the Diaspora.”

The organizing committee put together another stellar program that was both informative and entertaining.

Prior to the official part of the program, mixologist Talar Barsoumian presented the steps to prepare three cocktails. Note that the committee had sold prepackaged cocktail kits to give viewers the opportunity of mixing their own cocktails at home.

She welcomed all participants and ungerouhies from both chapters of Montreal and Laval and congratulated all the women present at the event.

She mentioned that in the 112-year history of ARS, this day brings a special meaning to all the women out there, as it is a day to celebrate and honor the tremendous work, they do for the community at large.

The motto of the homouhi has always been “With the people, for the people”

The year 2021 was no exception in how the organization put their resources and efforts together to help those who are most vulnerable. They continued their efforts in Artsakh. Helping out the orphanages. The wounded soldiers and all the displaced families from the war.

They helped the Syrian adolescents by providing them with warm winter jackets.

In Lebanon they reached out with their fundraising efforts to collect money and help those who were affected by the blast and have been displaced as a result offering them the essentials of life.

As the pandemic continued, it put limitations on the organization, but they continued their efforts to raise money in any way they can and continue with their social events for seniors and the under privileged. The pandemic brought to the forefront all social, economic, and mental problems. ARS extended its motherly hands to help all those during these trying times especially the past two years of the pandemic domestically and globally.

She thanked all members for their duties, their time, and their contribution monetarily.

The past year was also a year in which the ARS family lost one of her distinguished members and past president Uungerouhi Vanouhi Isajanian passed away in November of 2021.

Her legacy will not be forgotten as she devoted her life to a cause that she so strongly believed in. She will be a role model for all homouhis.

Ungerouhi Nelly then introduced the moderator of the round table, ungh. Lorig Sabounjian Dzadourian. Her background is in media and television and worked in Lebanon for Vanazayn for 25 years. She is currently a reporter in Montreal for an Armenian weekly show Hai Horizon.

Ungerouhi Lorig introduced the three panelists ung. Sonia Kiledjian Adjemian (Canada) Dr. Anahid Donabedian (France) and ung. Dr. Talar Chahinian (USA) as well as the topic of discussion, bringing to the forefront Armenian women in the diaspora and relate the topics to all women living outside of the homeland.

The panel opened with Ungerouhi Sonia teacher of Armenian studies at Sourp Hagop Armenian School in Montreal. At the present she is the Head of the Armenian curriculum for both primary and secondary schools. She is also an editor and writer for numerous papers.

Ungerouhi Sonia, opened by saying to take out the word “women” as she believes that men and women are both equal in this context. They are equally valuable in maintaining the language, culture, and the identity of the Armenian person. One cannot depend or rely on only one person to maintain this – as it is not fair for either one. They both equally must play the part to maintain the longevity of the language and everything that goes with it. “We should not build division amongst them or label them separately.”

When Armenia had its independence 30 years ago, the idea of returning to the homeland did not become a fruition by all, very few people left to settle. The diaspora is here to stay and thus one needs to build and support this idea. This doesn’t mean we shouldn’t support the homeland but to be clear that the diaspora is here to stay, and one should concentrate on that.

Secondly, the language is the most important key to keep one’s culture and ethnicity. Everything revolves around the language. Prayers, songs, poems, riddles everything is based on the language. When you forget the language, you have nothing left. It becomes very poor. It takes a lot of work and effort to maintain this, and one may easily lose scope of it.

In conclusion the diaspora is here to stay, and one has to work and maintain the language which is the skeleton of one’s ethnicity.

Dr. Talar agreed very much so with Ungerouhi Sonia but took a different approach to the question. Her positioning was more of a historical background on the theme and going back in history and how Armenians in general have been in this situation from the beginning always been exiled from their homelands. With the Eastern and Western Armenia playing a major role in language development and the on-going linguistic of it all.

This has been seen in the writings of past writers who change their writing styles and dialects from western to eastern Armenian. The writers kept the language going and strong as both eastern and western Armenian have had their enemies attack them on the language front and trying to maintain and keep the Armenian language.

Dr. Anahid Donbedian is a professor of language sciences at the University at Inalco. A member of structure and Dynamics of Languages. As well, co-head of the Areal Typology scientific axis Deputy Director of the Empiral Foundations of Linguistics Laboratory of Excellence Head of Armenian studies at Inalco.

Her position was more related to the fact that the Armenian language is not one that is going to sustain people’s livelihood living outside of the homeland. It is not going to be the bread and butter of ones living therefore people do not put any emphasis to learn more then they need too while continuing a higher degree of education. Dr. Donabedian also pointed out the difficulty of the Armenia teacher’s job in the diaspora with limited resources when it comes to textbooks of the western dialect. Most of the books are written by middle-aged men. Which in today’s society is not relatable. Thirdly, the people that are choosing these textbooks and curriculum are mostly men who run committees in the school that are very much outdated in their thought process and how to exactly administer.

Her conclusion is that Armenian teachers are put in a very difficult situation in trying to make the language approachable and keeping it interesting for the new generation of students. They have a very hard job ahead of them. If the resources and thinking behind it does not change for them.

The presentation was followed by three skits written by ungh. Nelly Barsemian and directed by ungh. Lena Khatcherian.

A couple who are about to have a child and are trying to select an Armenian name for the child – only to find out she’s not pregnant.

And a light Covid related skit – that has young women finding a new hobby and getting fit during the lockdown.

In closing the International Women’s Day committee 2022 President Sosee Beugekian Karabetian said a few words. She mentioned the role of the Armenian women has strengthened and changed with time. The Artsakh war and the loss of the soldiers, the women who have lost their sons, husbands, brothers and how they have carried on the challenges of raising families without them.

The Diaspora women also have their challenges in maintain and keeping the language and culture alive. The Armenian Relief Society has its work cut out for them as they continue to both reach out to the diaspora and to the homeland and continue their countless work.

The final word came from H.E. Ms. Anahit Harutyunyan, Ambassador Extraordinary and Plenipotentiary of the Republic of Armenia to Canada, who congratulated the diaspora in their efforts to preserve the Armenian culture and language and invited teachers to engage the youth to remain in close relation with Armenia. 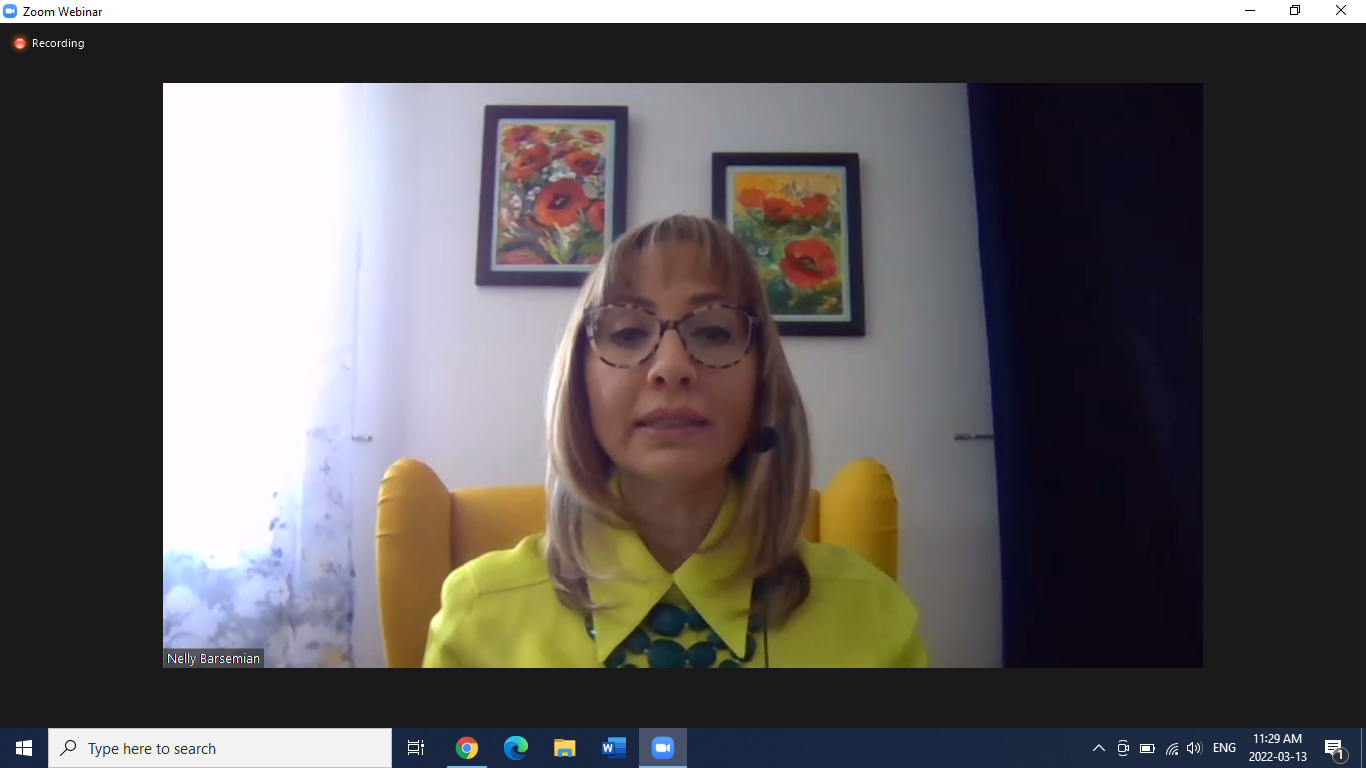 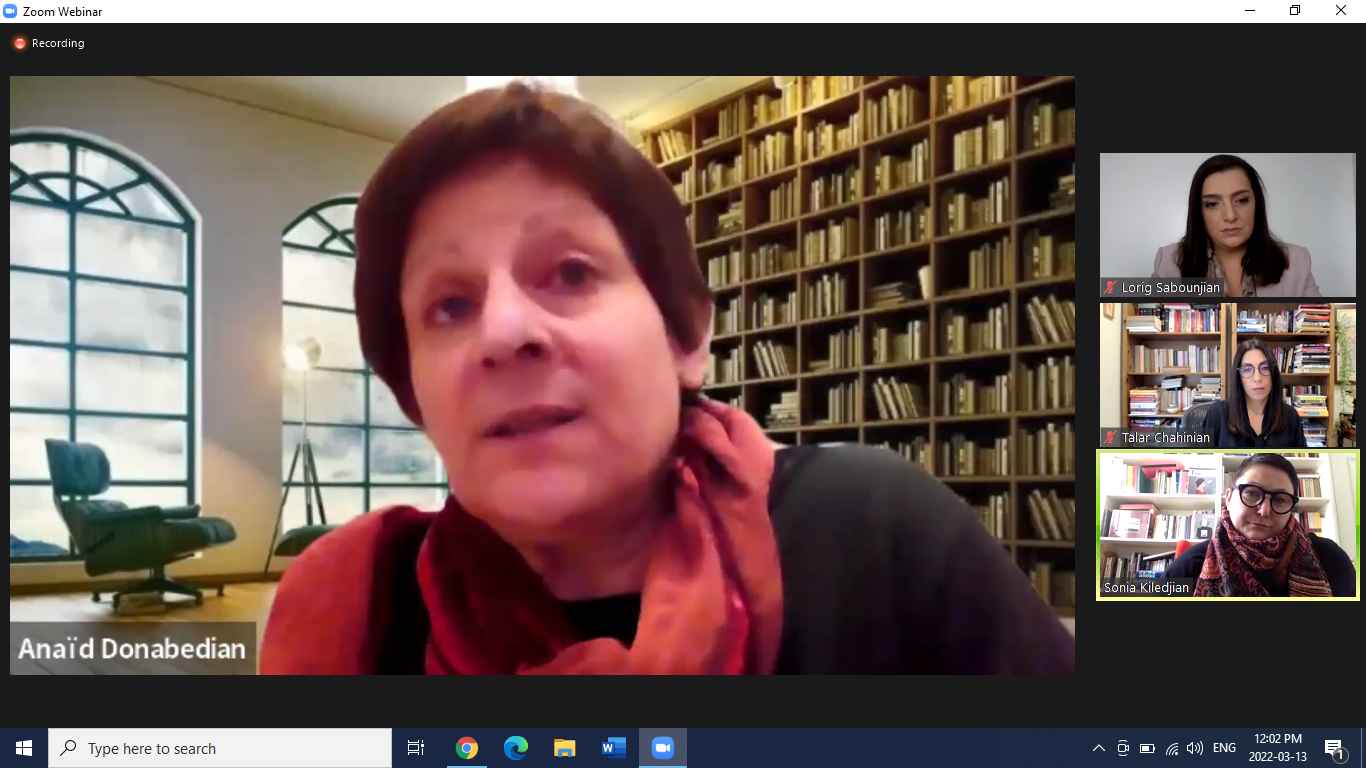 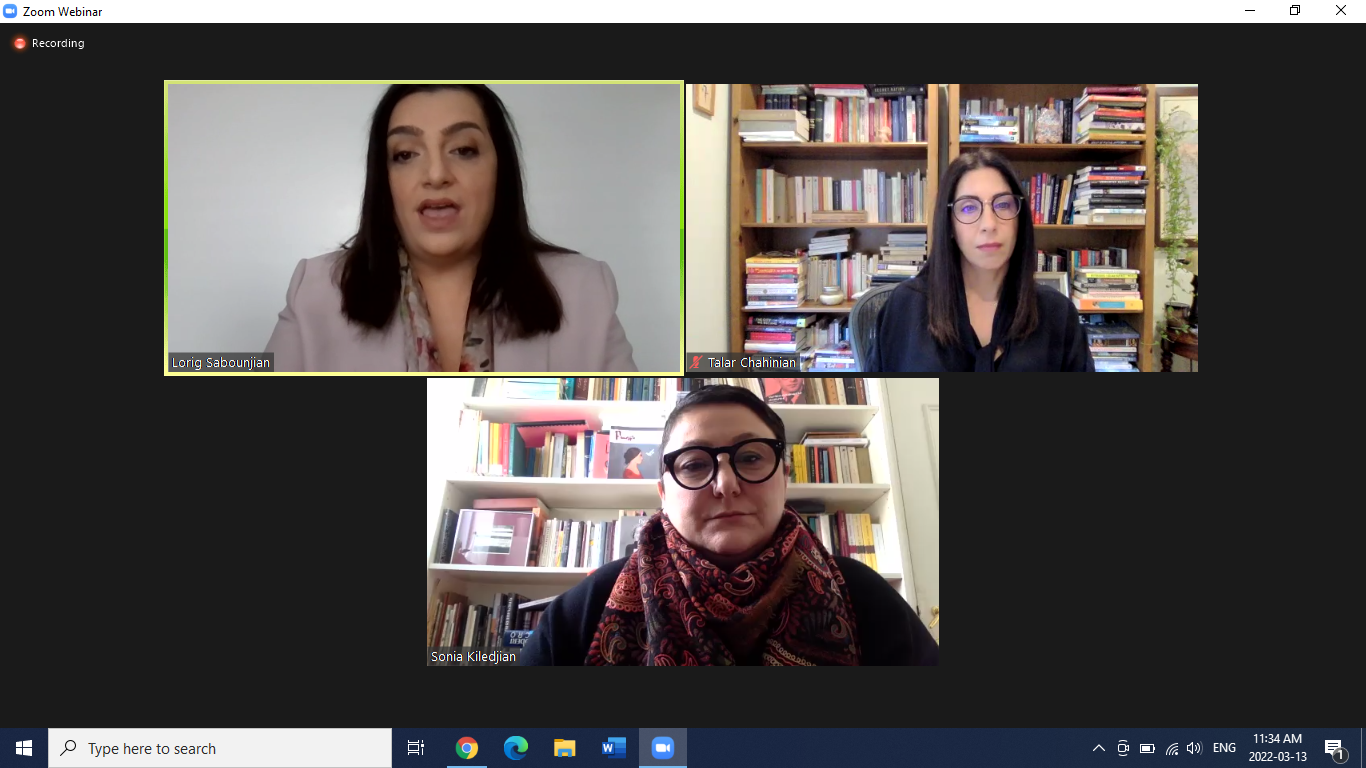 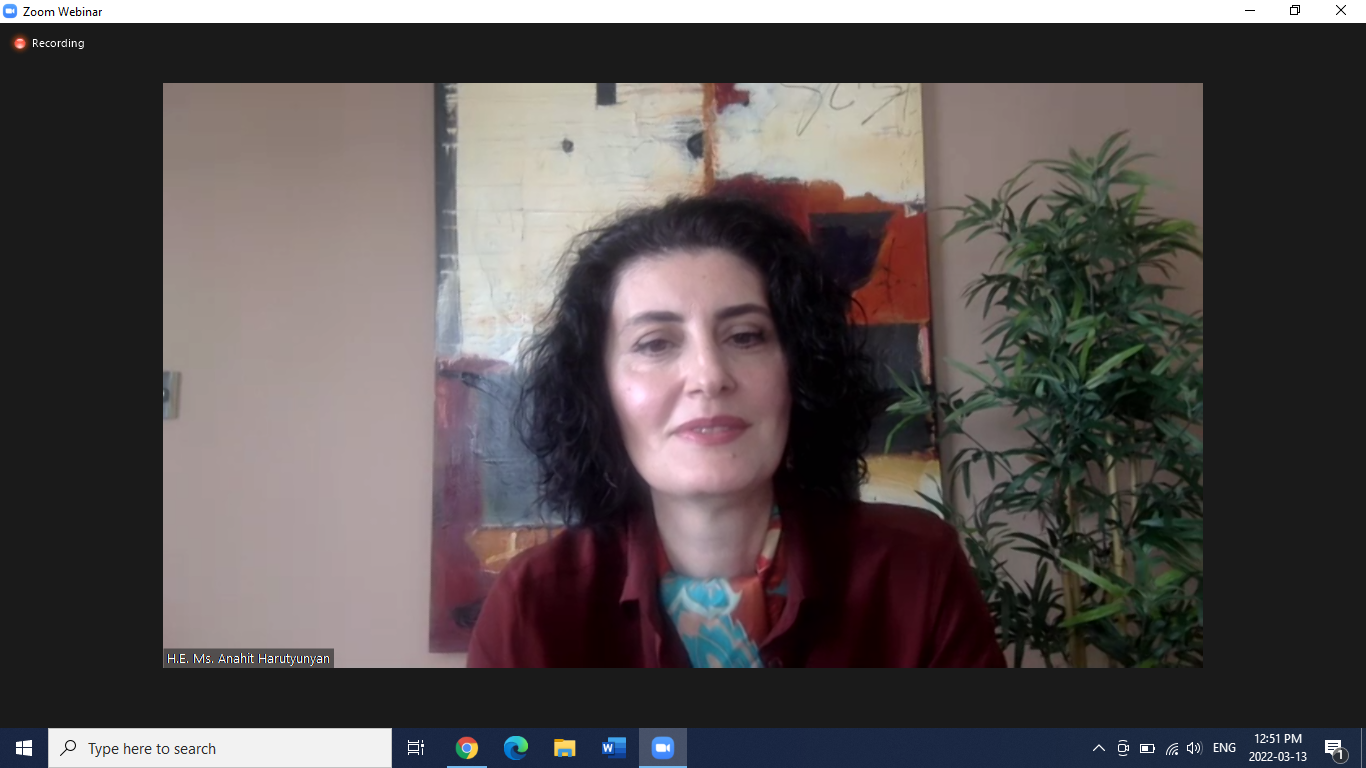