Armenians in Olympic Games and Varazdat: Armenian King Who Won a Gold Medal 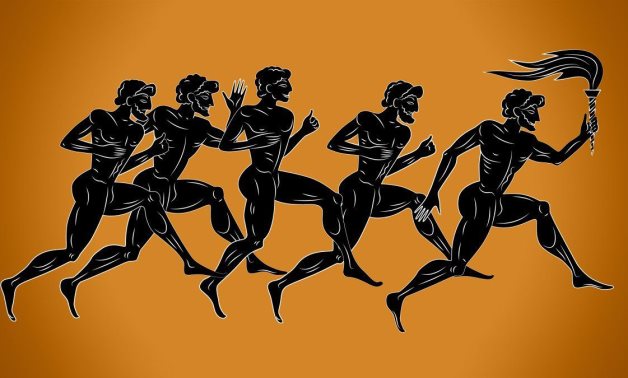 The tradition of the Olympic Games, which existed in ancient Greece, originated as part of a religious cult. Games were held from 776 BC. to 394 A.C. – in total 293 Olympic games have been held in the town of Olympia, which was considered by the Greeks as a sacred place. The winners were honored at the competitions as heroes in the war.

Armenians have participated in the Olympic Games since 1st century AD. According to the Armenian sources, the first Armenian, who took part in the Games in Olympia (Greece) was King Trdat I Arshakuni, who played in the races of quadriga – chariots, harnessed by four horses.

Thanks to the works of the Armenian historian Movses Khorenatsi, it is known that the first Armenian, who became the Olympic champion, was the Armenian king Trdat III Arshakuni, who won the wrestling competition in 281 at the 265th Games in Greece. Trdat III also was celebrated by the fact that it was during his reign that Armenia became the first country in the world to adopt Christianity as the state religion in 301.

The Museum of the Olympic Games, which is located in the city of Olympia in Greece, preserved the oldest marble board with the names of the winners of the Olympic Games, Nashasreda.ru writes. According to this board, in 385 the future king of Great Armenia – Varazdat became the champion of the Olympic Games in the competitions in fistfight. Fist-fighting entered the program of games in 688 BC, quickly becoming a favorite sport of the crowd. The risk of injury or even death here was extremely high, and the victims had to propitiate Zeus, because the battles were held in the sacred part of Olympia – in front of the 9-meter altar of Zeus, made from the ashes of sacrificial animals. In the fights there were no restrictions on weight, there were no rounds, rivals fought without any break, sometimes for 4 hours or more, until one of the opponents fell. In order to increase the strength of the attack, the soldiers wrapped their fists with straps of rough leather.

The victory of Varazdat brought him the glory of the strongest fighter of the Roman Empire, and he gained authority not only among the public, but also among the emperors.

According to the “Chronicle of Eusebius,” the Olympic Games were banned in 394 by Emperor Theodosius as pagan. Accurate evidence of the latest games are missing: it is believed that the 293rd Olympic Games did not take place. Thus, the Armenian king Varazdat was one of the last winners of the ancient games.

Movses Khorenatsi wrote about the reign of Varazdat: “The philosopher Augustus from Theodosia, nicknamed the Great, in the twentieth year of his reign appointed Varazdat from the same dynasty of Arshakuni as the king of Armenia instead of the Pap.” Varazdat was young, bold and strong, very skillful and smart. At the time he fled from Shapouh and, having come to the palace of the emperor, accomplished many feats. First he defeated the fist fighters in Pisa, then in the City of the Sun, Hellada, he beat the lions, and then at the Olympic Games he was honored, and the feats he accomplished could be compared with the deeds of St. Trdat.

When he joined our country as a king in the fifty-fifth year of Shapouh’s rule, he first of all grabbed some Syrian robbers, who met him in the Daranalisk gorges and began to pursue them. Those, slipping through the bridge through the narrow place of the Euphrates, dropped the plank; he, having run up, jumped through the Euphrates for a distance greater than the laconic Chion. It seemed that some new Achilles was jumping over the Scamander. The robbers, horrified by what they saw, dropped their weapons and surrendered.

Varazdat did not obey the instructions of the commanders of the Greek troops in his reign. So, he sent messengers to Shapouh asking him to marry one of his daughters. The Emperor of Theodosia ordered to capture him, but Varazdat hoped to justify himself before Augustus. However, the emperor did not even receive him, but ordered him to be taken away in iron chains to the island of Tulis in the Ocean. Varazdat reigned four years.”

The modern Olympic Games were revived in the late 19th century by the French public figure Pierre de Coubertin.

And when after the centuries-old break the Olympics started to be held again, the first Armenians, who took part in them were track and field athletes Vahram Papazian and Mkrtich Mkreyan, who were the only members of the Turkish national team at the Olimpic Games in 1912 in Stockholm. In the Soviet years, Armenian athletes were constantly included in the USSR national team and repeatedly became winners and prize-winners of the Olympic Games. Among them one can, in particular, mention such legendary champions as gymnast Albert Azaryan (recognized as the best Armenian athlete in the 20th century) and weightlifter Yuri Vardanyan (43-times world record holder), Panarmenian.net reports.

They were behind their compatriots from the USSR, as well as independent Armenia, and representatives of the Armenian diaspora, among whom we can also mention the two-time Olympic champion, weightlifter Norayr Nurikyan (Bulgaria), tennis player Andre Agassi (USA).

In total, during the performances as an independent team, Armenian athletes won 16 Olympic medals, of which 2 were gold, 7 silver and 5 bronze medals. The first Olympic champion of independent Armenia was wrestler Armen Nazaryan in 1996 in Atlanta. The second gold medal was brought by wrestler Arthur Alexanyan, in 2016, in Rio de Janeiro.