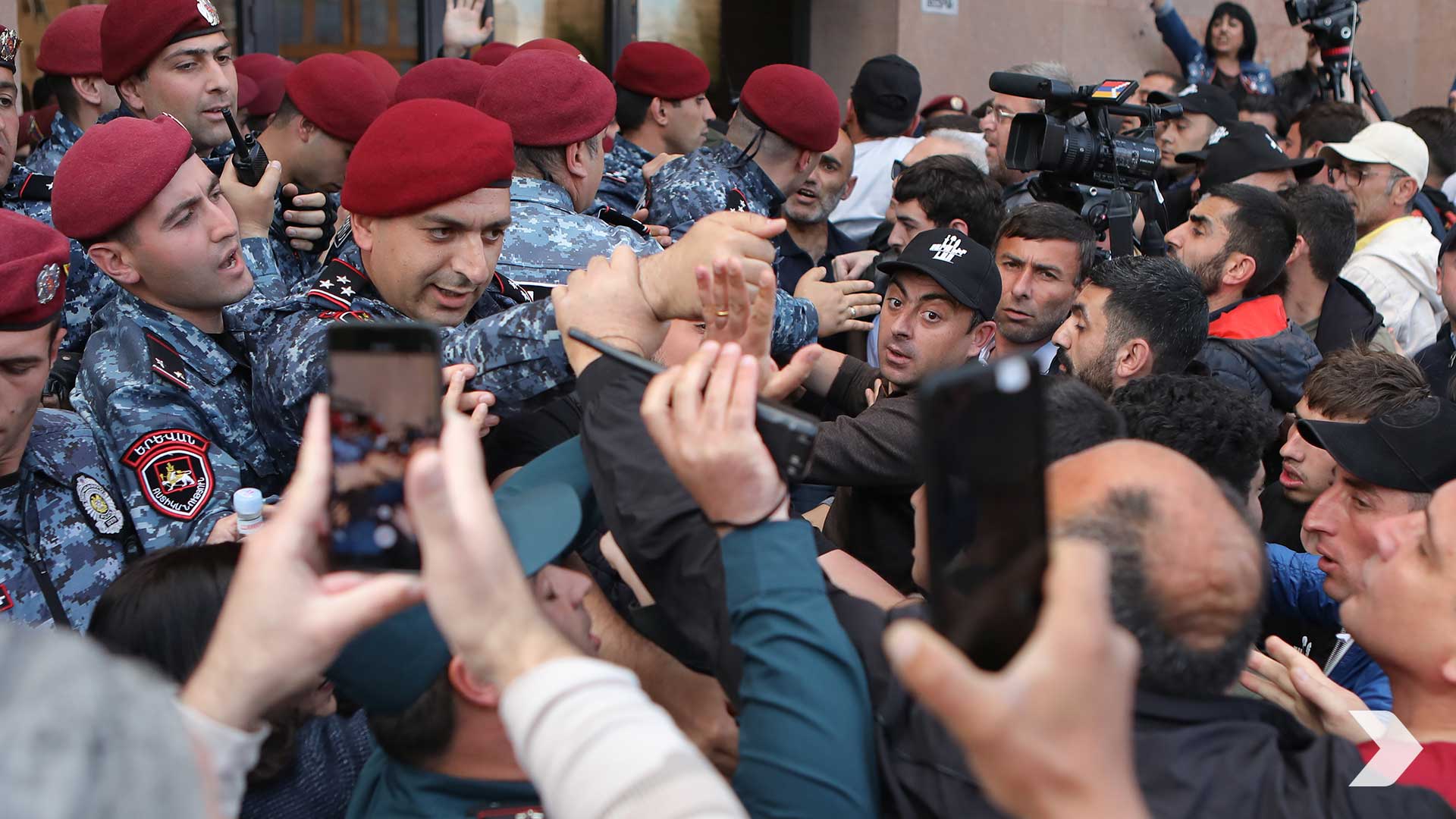 Law enforcement authorities have opened criminal cases against more than a dozen participants of protests calling for the resignation of Armenian Prime Minister Nikol Pashinyan.

Police have arrested hundreds of people on charges of hooliganism and violence since the start of mass protests on April 25. The two parliamentary opposition factions, the Armenia Alliance and I Have Honor Alliance, organized the demonstrations in response to what they see as the government’s readiness to cede Artsakh to Azerbaijan.

One protester was arrested in Yerevan on May 3 and has been accused of hitting a police officer.

Two participants in a rally that shut down a major Yerevan intersection on May 5 have been arrested on charges of hooliganism and violence against a police officer. After police officers ordered the demonstration to disperse, the two detainees shouted threats at the police, and one kicked and damaged a police car door and window, according to the police report.

One protester who helped block an intersection in the Yeranos village of the Gegharkunik province on May 5 has been accused of violence. Police say the administrative head of the nearby village Zolakar sustained an injury after a fight broke out between him and the detainee.

Three participants of a protest in Gyumri were arrested after they allegedly attacked a group of elderly men on May 8.

Police officers also arrested two members of the Armenian Revolutionary Federation (ARF) on charges of paying people to participate in the opposition rallies. The ARF reported that their office in Armavir was raided on May 6. The party denounced the charges and said that law enforcement aims to “sow fear and terror in society” in order to suppress the opposition movement.

No criminal cases have been launched against police officers, despite criticism from human rights defenders and civil society groups of the violent crackdown on the ongoing demonstrations.

Ombudswoman Kristine Grigoryan released a lengthy statement on May 10 stating that the police should refrain from using excessive force against citizens. Grigoryan’s office recorded that the police frequently “apprehended people by squeezing their throats and strangling them.” The Human Rights Defender also called on protest leaders to condemn violence committed by protest participants to “ensure the normal and peaceful conduct of the current and future assemblies.”

Protesters have been camping in France Square since May 1st, when the opposition movement declared the start of “non-stop protests.” During a rally in France Square on May 9, vice president of the National Assembly and chair of the ARF Supreme Council of Armenia Ishkhan Saghatelyan gave a speech detailing for the first time the steps that would follow the removal of the current government.

Saghatelyan, who has emerged as a protest leader, called for the formation of an interim government of national unity that would modernize the national security systems of Armenia and Artsakh, affirm the right of the people of Artsakh to self-determination and rule out any status of Artsakh under Azerbaijan.

“Artsakh and the independence of Armenia are endangered because of this anti-national, incompetent government. We must correct this situation. Is it possible? Yes. How? The way out is to build security, solidarity, stability and a strong Armenia,” Saghatelyan said.

Russia commented on the protests for the first time on May 5. Kremlin spokesperson Dmitry Peskov said that “this is entirely an internal affair of Armenia.”

“We are interested in ensuring that this period ends as soon as possible in Armenia and that a period of stability comes again, which will allow to move step-by-step toward the implementation of those trilateral agreements on Karabakh, which were finalized with the participation of the Russian president, as well as in terms of the development of our bilateral relations in general,” Peskov said.

The US State Department also commented on the protests during a press briefing on May 9.

“We urge people to express their opinions in a peaceful manner. We urge authorities to exercise restraint and encourage those protesting to refrain from violence and to respect the rule of law and Armenia’s democracy,” US State Department spokesperson Ned Price said.

The opposition movement emerged in response to a controversial speech delivered by Pashinyan at the Armenian National Assembly on April 13. Pashinyan received widespread criticism from political figures and civic activists from Armenia and Artsakh for his call to “lower the bar” regarding the status of Artsakh in negotiations on a peace deal with Azerbaijan. The opposition says that Pashinyan is prepared to cede Artsakh to Azerbaijan.

“Today, the international community again tells us to lower the bar a bit regarding the question of the status of Artsakh, and you will ensure a great international consolidation around Armenia and Artsakh,” Pashinyan said during his address. “Status in the current situation is not a goal, but rather a means to guarantee the security and rights of the Armenians of Nagorno Karabakh.”

On May 5, Secretary of Armenia’s Security Council Armen Grigoryan said that Armenia had submitted a six-point proposal to Azerbaijan regarding the settlement of the Artsakh conflict.

Armenia’s ambassador-at-large Edmon Marukyan said that the Azerbaijani side had accepted the proposals, which address the “issues of the security and the protection of the rights of the Armenians of Nagorno Karabakh and the final status of Nagorno Karabakh.”

The six-point proposal responded to a five-point proposal submitted by Azerbaijan’s Foreign Ministry in March. The latter included the mutual recognition of the sovereignty and territorial integrity of Armenia and Azerbaijan.

“Azerbaijan’s proposed points were not unacceptable for Armenia. With its six points, Armenia proposed that there should also be a resolution to the Nagorno Karabakh conflict in order for comprehensive peace to be possible. Now, our approach is that these two packages, 5+6 points, must be joined together to start negotiations over a peace treaty in order to find a long-term solution to the Nagorno Karabakh conflict,” Grigoryan said on May 5.

According to Marukyan, Pashinyan shared the six-point proposal with Azerbaijan’s President Ilham Aliyev during a trilateral summit in Brussels chaired by European Council President Charles Michel on April 6. He did not explain why the existence of the proposal has not been publicized until now.

Azerbaijan’s Foreign Minister Jeyhun Bayramov said that Armenia’s proposal includes the involvement of the OSCE Minsk Group co-chairs in mediating negotiations between the two countries. Bayramov suggested that Azerbaijan is not interested in mediation by the Minsk Group.

“This is happening at a time when there is no contact between the co-chairs of the Minsk Group against the background of the events in Ukraine. This group is almost paralyzed,” Bayramov said.