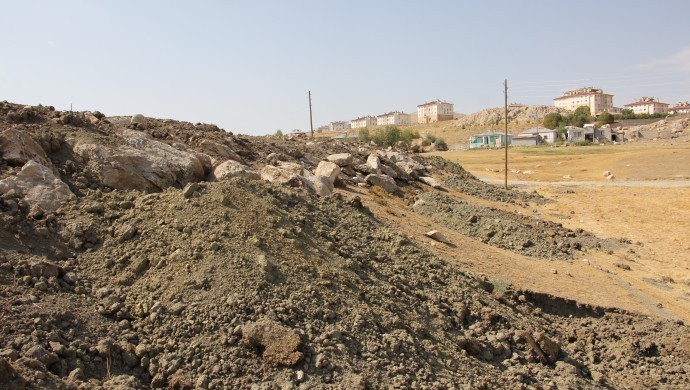 An Armenian cemetery in the Tuşba district of the eastern Van province has been damaged by bulldozers, Bianet reports.

Kalecik Neighborhood, also known as Lezk, was an Armenian neighborhood before the 1915 genocide. The Housing Development Agency (TOKİ) built housing estates in the neighborhood after the 2011 Van earthquake.

A few days ago, a person who is said to be a landowner brought bulldozers to the cemetery area and damaged the graves, according to a report by Mesopotamia Agency (MA). Gravestones and bones were scattered around by the bulldozers, the agency reported.

“It is seen in the images that gravestones were damaged and dozens of bones from the cemetery were scattered around,” he said.

The MP pointed out that similar incidents are often reported in Van, which indicates that the necessary measures to protect historical monasteries, churches and cemeteries are not taken.

“In 2017, a toilet, a dressing room and a car park were built on Dilkaya Tumulus and the Armenian cemetery in Can,” he noted. “Because of treasury hunting and the negligence of the executive authorities, historical and cultural structures in and around Van are damaged.”

Sarısaç asked Vice President Fuat Oktay whether an investigation was opened into the incident and why the authorities do not protect Armenian cemeteries and cultural and religious heritage.

He also asked whether the government plans to protect and restore such assets and whether there is an inventory of Armenian monasteries, churches and other cultural assets in the region.