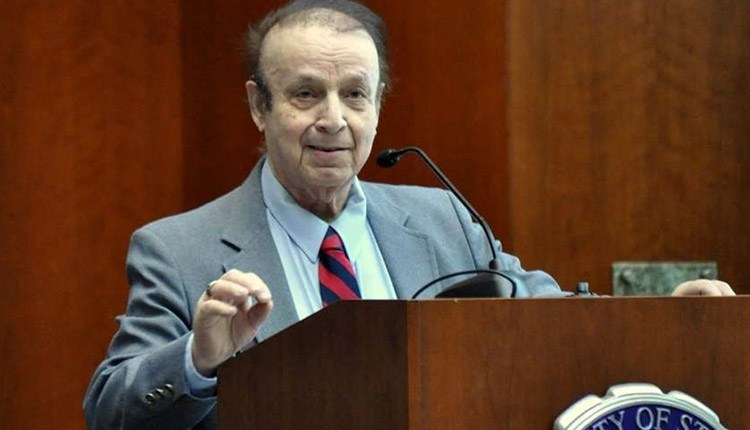 ​His academic background includes affiliations with Harvard University as a Research Fellow, the Massa-chusetts Institute of Tech-nology as a Guest Professor, and Duke University as a Visiting Professor.

​In the last twenty years he has lectured extensively in French, English and German in such institutions as the Free University of Berlin and the Universities of Munich, Parma, Torino, Zürich, Uppsala, Frankfurt am Main, Cologne, Bochum, Münster, Amster-dam, Utrecht, Geneva, Brussels, UNESCO’s Paris center, and the U.N. in New York under the sponsorship of the Permanent Missions of Armenia and Rwanda. He was the keynote speaker at the centennial of the John Marshall Law School, along with the renowned legal scholar, M.C. Bassiouni.

Professor Dadrian was the first Armenian scholar invited in 1995 to the British Parl-iament, House of Commons, to deliver a lecture commem-orating the 80th anniversary of the Armenian genocide. In 1998, in a special ceremony, he was inducted into the ranks of the Academy of Sciences of the Republic of Armenia. At the same time, he was decorated by that republic’s president with the Khorenatzi Medal, Armenia’s highest cultural award, and in May 2009, he was honored with the Republic’s highest award, the President’s Prize of a Gold Medal.

His groundbreaking re-search has been supported by two large grants from the National Science Foundation, resulting in the publication of two separate monographs by the Yale Journal of Inter-national Law.

Following a series of specifically arranged lectures in Armenia in April 2005 commemorating the 90th anniversary of the Armenian genocide, Prof. Dadrian was declared Honorary Professor by two universities in Armenia. Additionally, he received three gold medals, one of which was presented by the Rector of Yerevan State University, and the other by the President of Yerevan’s Law School—both of them being the highest awards of these institutions.

The International Associ-ation of Genocide Scholars, during its Sixth Biennial Conference, June 4-7, 2005, bestowed on him its Lifetime Achievement Award—the first ever granted. In May 2005, he was chosen as a recipient of the Ellis Island Medal of Honor.

After serving as Professor of Sociology at the State University of New York from 1970 to 1991, Dadrian shifted his academic career to conducting research full-time on the Armenian Genocide. For several years he was engaged as Director of a large Genocide Study Project sponsored by the H.F. Guggenheim Foundation. The project’s first major achieve-ment was the publication, now in its seventh printing, of an extensive volume titled The History of the Armenian Genocide: Ethnic Conflict from the Balkans to Anatolia to the Caucasus. This work has appeared in numerous languages. Another major work, German Responsibility in the Armenian Genocide: A Review of Historical Evi-dence of German Complicity, was published in 1996 and is now in its third edition. His next book, Warrant for Genocide: The Key Elements of the Turko-Armenian Conflict, appeared in 1999, the same year as Key Elements of the Turkish Denial of the Armenian Genocide. His most recent book, Judgment at Istanbul, appearing in 2011, is a massive legal and historical study of the post-WWI Turkish Military Tribunals on the Armenian Genocide.

Professor Dadrian has been Director of Genocide Re-search at the Zoryan Institute since 1999.

President of the Republic Prize Gold Medal (including $10,000) (President Serge Sarkisyan), May 2009.

Citation of Merit on the 80th Anniversary of the Armenian Genocide (President Levon Ter Petrosyan), April 1995.

State Committee for the Commemoration of the 90th Anniversary of the Armenian Genocide, April 2005.

State Committee for the Commemoration of the 80th Anniversary of the Armenian Genocide, April 1995.

St. Sahag and St. Mesrob Medal and Encyclical from His Holiness Karekin II, Catholicos of All Armenians, March 2005.

St. Mesrob Mashdotz Gold Medal and Encyclical from His Holiness Aram I, Catholicos of the Great House of Cilicia, August 1999.

Scholars Conference on the Holocaust and the Churches, 35th Anniversary, “Special Honors in Recognition of his Lifetime of Distinguished Work,” March 2005.

Fridjof Nansen Memorial Medal from the President of the National Academy of Sciences, Republic of Armenia, September 2006.

I. ON GENOCIDE AND GENOCIDE-RELATED TOPICS

With Taner Akçam. Judgment at Istanbul: The Armenian Genocide Trials.

[The Armenian Genocide as Documented in the Central Powers’ Sources]. Attila Tuygan, transl.

Istanbul: Belge Uluslararası Yayıncılık, 2007, 412pp.
History of the Armenian Genocide: Ethnic Conflict from the Balkans to Anatolia to the Caucasus.

The following are translations of History of the Armenian Genocide: Ethnic Conflict from the Balkans to Anatolia to the Caucasus

The Key Elements in the Turkish Denial of the Armenian Genocide: A Case Study of Distortion and Falsification.

German Responsibility in the Armenian Genocide: A Review of the Historical Evidence of German Complicity.

[The Treatment of the Armenian Genocide by the [Ottoman] Parliament and Its Historical Analysis]. Boston: Baikar, 1995, 142 pp. In Armenian. Bibliography in English.

“The Armenian Genocide: Review of Its Historical, Political, and Legal Aspects,” University of St. Thomas Journal of Law and Public Policy V, no. 1 (Fall 2010): 135-194. Also reprinted and distributed separately to law schools and university libraries in the US, Canada and Europe.

“The Armenian Genocide as a Dual Problem of National and International Law,” University of St. Thomas Journal of Law and Public Policy IV, no. 2 (Spring 2010): 60-82. Also reprinted and distributed separately to law schools and university libraries in the US, Canada and Europe.

“The Armenian Genocide and the Legal and Political Issues in the Failure to Prevent or to Punish the Crime,” University of West Los Angeles Law Review 29 (1998): 43-78.

“The Armenian Genocide and the Evidence of German Involvement,” University of West Los Angeles Law Review 29 (1998): 79-122.

“The Historical and Legal Interconnections Between the Armenian Genocide and the Jewish Holocaust: From Impunity to Retributive Justice,” Yale Journal of International Law 23, no.2 (Summer 1998): 504-559.

“The Complicity of the Party, Government, and the Military. Select Parliamentary and Judicial Documents,” (Recently uncovered and obtained relative to the Armenian Genocide.) Journal of Political and Military Sociology 22, no.1 (1994): 29-96.

“A Textual Analysis of the Key Indictment of the Turkish Military Tribunal Investigating the Armenian Genocide,” Journal of Political and Military Sociology 22, no.1 (1994): 133-171.

“Genocide as a Problem of National and International Law: The World War I Armenian Case and Its Contemporary Legal Ramifications,” Yale Journal of International Law 14, no. 2 (Summer 1989): 221-334. Also printed separately with two Appendices and Bibliography, 134 pp.