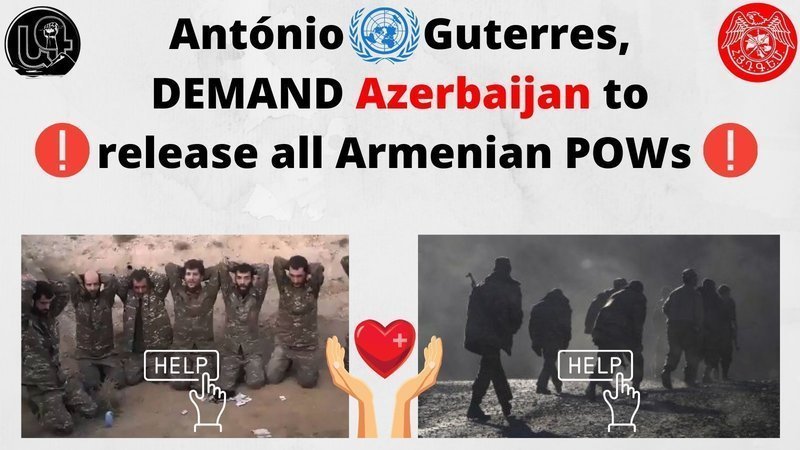 On April 24 2021, Armenian Student Organisations across Canada, presided by the Armen Karo Armenian Student Association and the Armenian Youth Federation of Canada are urging the Secretariat of the United Nations to act upon the illegal detention of the Armenian Prisoners of War (POWs) held illegally by the Republic of Azerbaijan, which goes against all the legal provisions of the trilateral Agreement of November 9, 2020, and against all the international and regional legal provisions provided under the international law and international customs.

Ever since the end of the Azerbaijani aggression in Artsakh (Nagorno-Karabakh) in November 2020, the Republic of Azerbaijan has refused to cooperate with the Armenian side to organize the repatriation of these prisoners of war.

According to Armenia’s Representative Office at the European Court of Human Rights, Azerbaijan illegally detains 240 alleged prisoners of war and civilians. Around 90 percent of the illegally detained have photo and/or video evidence confirming that Azerbaijani forces had taken these people into custody.

International humanitarian law, and the law of armed conflict, requires parties of an international armed conflict to treat POWs humanely in all circumstances and exchange them to reduce human suffering. Article 4-5-13 of the Third Convention Relative To The Treatment of Prisoners of War (1949) explicitly defines who is considered a POW, frames the timeline through which a person is defined as a POW and protects all POWs from inhuman treatment during and after any type of armed conflict. Azerbaijan is in clear violation of this treaty, by refusing  to disclose the exact number of POWs in its jails and by refusing Red Cross mediation.

In order to secure the liberation of the illegally detained Armenian soldiers, to raise international awareness to this tragedy, as well as to dwarf Turkey’s and Azerbaijan’s latest attempt to exterminate Armenian civilians from their native lands, our goal is for this petition to reach 50’000 signatories in 24 days. We Remember and We Demand: Free all Armenian POWs.

Convention (III) relative to the Treatment of Prisoners of War. Geneva, 12 August 1949. Article 4 (PRISONERS OF WAR)

A. Prisoners of war, in the sense of the present Convention, are persons belonging to one of the following categories, who have fallen into the power of the enemy:

(1) Members of the armed forces of a Party to the conflict as well as members of militias or volunteer corps forming part of such armed forces.

(2) Members of other militias and members of other volunteer corps, including those of organized resistance movements, belonging to a Party to the conflict and operating in or outside their own territory, even if this territory is occupied, provided that such militias or volunteer corps, including such organized resistance movements, fulfil the following conditions:

(a) that of being commanded by a person responsible for his subordinates; (b) that of having a fixed distinctive sign recognizable at a distance; (c) that of carrying arms openly; (d) that of conducting their operations in accordance with the laws and customs of war.

(3) Members of regular armed forces who profess allegiance to a government or an authority not recognized by the Detaining Power.

(4) Persons who accompany the armed forces without actually being members thereof, such as civilian members of military aircraft crews, war correspondents, supply contractors, members of labour units or of services responsible for the welfare of the armed forces, provided that they have received authorization from the armed forces which they accompany, who shall provide them for that purpose with an identity card similar to the annexed model.

(5) Members of crews, including masters, pilots and apprentices, of the merchant marine and the crews of civil aircraft of the Parties to the conflict, who do not benefit by more favourable treatment under any other provisions of international law.

(6) Inhabitants of a non-occupied territory, who on the approach of the enemy spontaneously take up arms to resist the invading forces, without having had time to form themselves into regular armed units, provided they carry arms openly and respect the laws and customs of war.

Convention (III) relative to the Treatment of Prisoners of War. Geneva, 12 August 1949. Article 5 (BEGINNING AND END OF APPLICATION)

The present Convention shall apply to the persons referred to in Article 4 from the time they fall into the power of the enemy and until their final release and repatriation.

Should any doubt arise as to whether persons, having committed a belligerent act and having fallen into the hands of the enemy, belong to any of the categories enumerated in Article 4, such persons shall enjoy the protection of the present Convention until such time as their status has been determined by a competent tribunal.

Prisoners of war must at all times be humanely treated. Any unlawful act or omission by the Detaining Power causing death or seriously endangering the health of a prisoner of war in its custody is prohibited, and will be regarded as a serious breach of the present Convention. In particular, no prisoner of war may be subjected to physical mutilation or to medical or scientific experiments of any kind which are not justified by the medical, dental or hospital treatment of the prisoner concerned and carried out in his interest.

Likewise, prisoners of war must at all times be protected, particularly against acts of violence or intimidation and against insults and public curiosity.

Measures of reprisal against prisoners of war are prohibited.