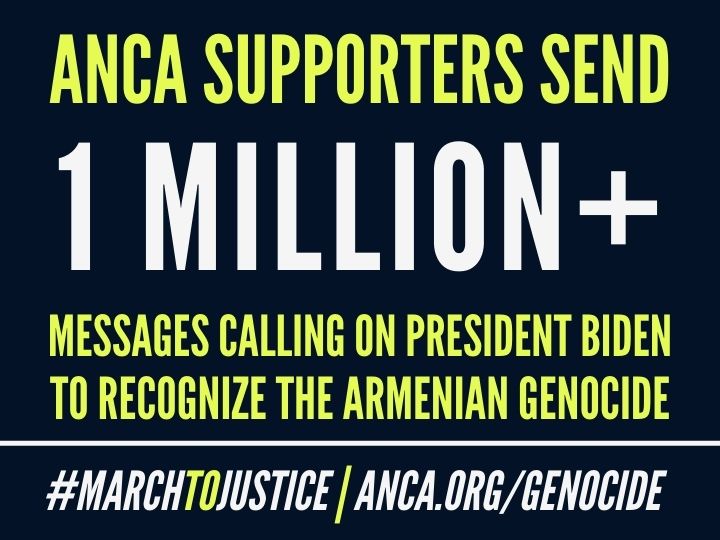 WASHINGTON, DC – The Armenian National Committee of America (ANCA) has rallied Armenian Americans from all 50 states to send over 1,000,000 messages to the White House and Congress over the past several months – generating powerful momentum for President Biden to speak truthfully about the Armenian Genocide this April.

ANCA Chairman Raffi Hamparian, in a video message issued today, expressed his thanks to the community and coalition partners for reaching the million message milestone in the ANCA’s strategic campaign to secure a long-awaited reset in US Armenian Genocide policy by the Biden administration. “On behalf of the Armenian National Committee of America, I want to say thank you. Thank you for your faith. Thank you for your dedication. Working together, we will move mountains. Working together, we are on the #MarchToJustice.”


In letters addressed to President Joe Biden, Vice President Kamala Harris, senators and representatives, advocates argued that “a principled American stand for the truth – alongside a dozen of our NATO allies – will help impress upon Ankara that it must abandon its denials, acknowledge its guilt, and reckon with its present-day responsibilities for the consequences of its crimes.” They stressed that “with Turkey and its ally Azerbaijan pursuing new genocidal ambitions against the Armenian homeland, it is more urgent than ever for the White House to stop using evasive language and euphemistic terminology in its annual April 24th statements.”

In March, a bipartisan group of 38 senators, led by Senate Foreign Relations Committee Chairman Robert Menendez (D-NJ), called on President Biden to follow the lead of Congress in fully and formally recognizing the Armenian Genocide. “We join the Armenian community in the United States and around the world in honoring the memory of these victims, and we stand firmly against attempts to pretend that this intentional, organized effort to destroy the Armenian people was anything other than a genocide,” wrote the senators. “You have correctly stated that American diplomacy and foreign policy must be rooted in our values, including respect for universal rights. Those values require us to acknowledge the truth and do what we can to prevent future genocides and other crimes against humanity.”

Rep. Adam Schiff (D-CA) is leading the Congressional Armenian Caucus letter, circulating in Congress now, calling on the President to honor his pledge as a candidate and recognize the Armenian Genocide. “Mr. President, as you said last year in your April 24 statement, ‘Silence is complicity,’” states the US House letter to President Biden. “The shameful silence of the United States Government on the historic fact of the Armenian Genocide has gone on for too long, and it must end. We urge you to follow through on your commitments, and speak the truth.”

Pro-Armenian advocates can contact their US Representative to cosign the Armenian Caucus letter to the Biden administration, support a $100 million allocation in US aid to Armenia and Artsakh, and urge co-sponsorship of H.Res.220, demanding Azerbaijan’s return of Armenian captives.

During his confirmation process in response to questions by Senator Ed Markey (D-MA) regarding the Biden administration’s policy on the Armenian Genocide, Secretary of State Antony Blinken answered, “Our administration will be committed to prioritizing human rights and ensuring such a tragedy is not repeated. The administration will determine the wording for the White House statement to mark Remembrance Day once in office and will consult with Congress on this important issue.”

President Biden referenced the Armenian Genocide multiple times during his presidential candidacy. In his April 24, 2020 statement, he noted, “During my years in the Senate, I was proud to lead efforts to recognize the genocide against the Armenian people. Last year, I was pleased to endorse bipartisan legislation in the House and Senate that officially recognized and established an ongoing US commemoration of the Armenian Genocide. If elected, I pledge to support a resolution recognizing the Armenian Genocide…”

On September 16, 2019, Presidential candidate Joe Biden, in a letter to the ANCA, stated that “The United States must reaffirm, once and for all, our record on the Armenian Genocide. We must never forget or remain silent about this horrific and systematic campaign of extermination that resulted in the deaths of 1.5 million Armenian men, women, and children and the mass deportation of 2 million Armenians from their homes. If we do not fully acknowledge, commemorate, and teach our children about genocide, the words ‘never again’ lose their meaning. The facts must be as clear and as powerful for future generations as for those whose memories are seared by tragedy. Failing to remember or acknowledge the fact of a genocide only paves the way for future mass atrocities.”

US recognition of the Armenian Genocide—alongside growing global condemnation of this crime—isolates Turkey and undermines its denials, increasing pressure upon Ankara to end its campaign of lies, cease its obstruction of justice and open the door to a truthful, just and comprehensive resolution of present-day Turkey’s legal, moral, political and territorial responsibilities for this still unpunished crime against all humanity.

The US first recognized the Armenian Genocide in 1951 through a filing which was included in the International Court of Justice (ICJ) Report titled: “Reservations to the Convention on the Prevention and Punishment of the Crime of Genocide.” The specific reference to the Armenian Genocide appears on page 25 of the ICJ Report: “The Genocide Convention resulted from the inhuman and barbarous practices which prevailed in certain countries prior to and during World War II, when entire religious, racial and national minority groups were threatened with and subjected to deliberate extermination. The practice of genocide has occurred throughout human history. The Roman persecution of the Christians, the Turkish massacres of Armenians, the extermination of millions of Jews and Poles by the Nazis are outstanding examples of the crime of genocide.”

Since 1965, 49 US states have recognized the Armenian Genocide through resolution or proclamation; Mississippi has yet to accurately commemorate and condemn this crime.