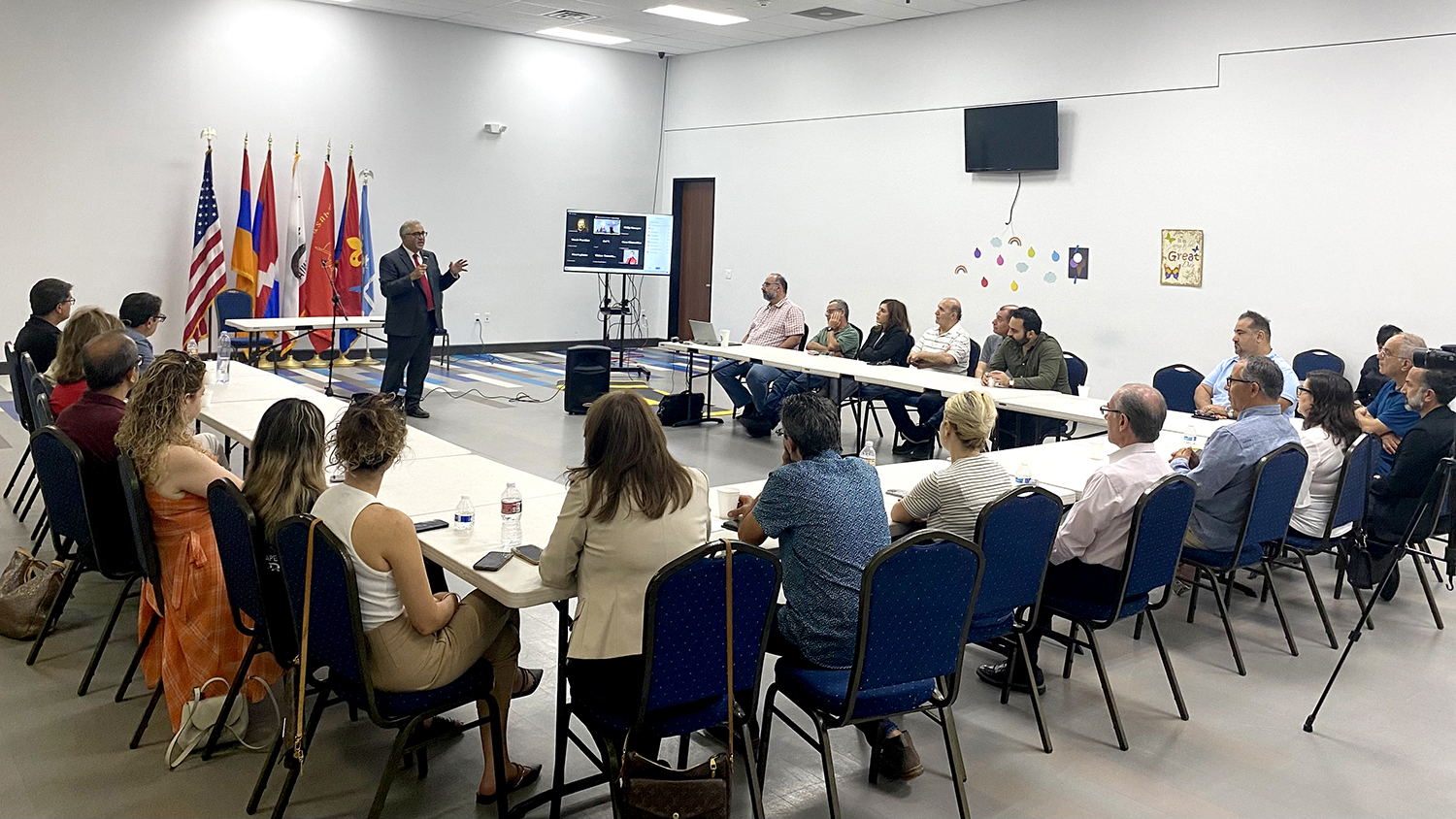 WASHINGTON, DC – The Armenian National Committee of America (ANCA) – in a series of online and in-person briefings – is rallying Armenian American communities across the United States in support of a series of legislative initiatives to defend Artsakh, strengthen Armenia, and hold Turkey and Azerbaijan accountable.

In the weeks leading up to U.S. House passage of four ANCA-backed amendments to the Fiscal Year 2023 National Defense Authorization Act (NDAA), the ANCA Board coordinated two national online, interactive briefings, bringing local chapter grassroots advocates from both the eastern and western ANCA regions up to speed on the challenges and opportunities facing Armenia and Artsakh in our nation’s capital. The calls engaged the full array of ANCA stakeholders in a nationwide campaign, aligned with the organization’s mission of advocating for a safe and secure Armenian homeland and Artsakh. The calls contributed meaningfully to the passage of three amendments targeting Azerbaijan’s aggression and a fourth, creating roadblocks to Turkey’s acquisition of new U.S. F-16 fighter jets. During these sessions, ANCA Executive Director Aram Hamparian and Government Affairs Director Tereza Yerimyan offered detailed analyses of the ANCA’s legislative strategy, and Gev Iskajyan, of the Armenian National Committee of Artsakh, provided first-hand reports from Stepanakert on the crisis facing Artsakh and the urgent necessity for global advocacy for security, self-determination, and freedom.

“Our array of ongoing local, regional, and national work sessions – in person, online, and virtual – inform our chapters, educate our activists, and inspire our grassroots to advance our shared ANCA policy priorities,” said ANCA National Board Member Dzovinar Hamakordzian. “Our coordinated national strategy contributes to the survival of Artsakh, the security of Armenia, and accountability for Turkey and Azerbaijan – three urgent short-term objectives that align with our enduring commitment to the long-term viability of the Armenian nation.”

Following the two successful national online briefings in June, on July 16 Hamparian joined ANCA National Board Members Aida Dimejian and Zanku Armenian for an in-person strategic briefing in Burbank, California bringing together over a dozen local western U.S. chapters and leading advocates, with other chapters from outside southern California participating online. He was joined by nationally respected veteran political consultant, Areen Ibranossian – President of Chief Strategies – who offered a detailed overview of how the Armenian American community and voters made an impact in the June 2022 California primary elections and where the opportunities are for the November general elections. Ibranossian also made a case for including as much youth in the political process as possible, citing his own career history where his early experiences with the ANC made a long-lasting impact on his career in politics.
The program closed with inspiring remarks by Glendale Mayor Ardy Kassakhian, a longtime community leader and advocate. Kassakhian stressed how the ANCA has always been at the forefront of defending justice and the rights of the Armenian nation both in the US and around the world and that in this difficult moment in Armenian history the ANCA is needed more than ever, urging the western region local chapters and activists not to be discouraged and carry the torch for the Armenians of Artsakh and Armenia.

“The existential challenges facing Artsakh’s survival and Armenia’s security require a redoubling of the grassroots mobilization driving our urgent foreign policy priorities.  We must meet the threats to our homeland with unprecedented activism – at every level, in every district, across every state,” stated Aida Dimejian.

“As a national grassroots movement, we have, for more than a century now, drawn energy and inspiration from deep ties and robust engagement with communities across America – diverse in so many ways, but united in our collective resolve, our enduring resilience, for the sacred cause of our nation,” said Zanku Armenian.

“These most recent briefings, including the in-person briefing to the national ANCA’s U.S. western region local chapters, were organized around our national legislative strategy and are great examples of the strong, sustained, and effective leadership the ANCA is providing across the American political and policy-making landscape. The large turnout for our in-person briefing in Burbank demonstrates that our ANC local leaders throughout our western region are fully engaged and stand ready to lead our community’s grassroots mobilization,” added Armenian.