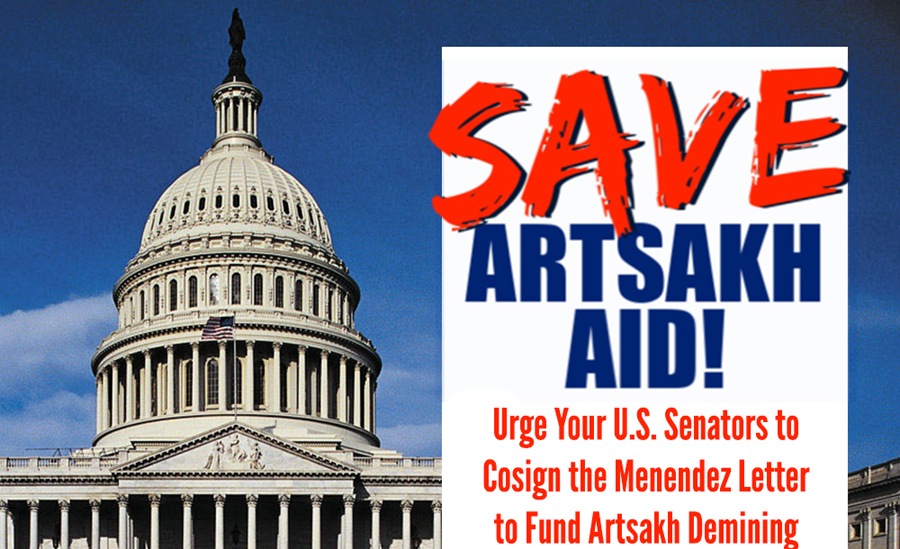 WASHINGTON, DC – The Armenian National Committee of America (ANCA) today rolled out an action alert empowering Americans to quickly and easily call on their U.S. Senators to co-sign an urgent Congressional letter in support of saving the Artsakh aid program – www.anca.org/sign.

The Senate letter – circulated by Sen. Robert Menendez, Ranking Member of the Foreign Relations Committee – calls on the bipartisan leadership of the Appropriations Committee to mandate at least $1.5 million in FY21 assistance for U.S. humanitarian programs in Artsakh (Nagorno Karabakh). This humanitarian aid program, long under attack by Azerbaijan’s Aliyev regime, has been aggressively targeted by the Trump Administration, even as it ramps up U.S. defense and security aid to Baku.

The letter also asks for robust funding for Nagorno-Karabakh-based regional rehabilitation services for survivors of landmine injuries and individuals with physical and cognitive disabilities.  Among programs that could benefit is the Lady Cox Rehabilitation Center in Stepanakert, which treats 1,000 patients in-house a year, and provides more than 24,000 out-patient treatments. Despite its remarkable progress, the Center still only meets 20% of the needs of the local population, leaving as many as 60,000 regional patients without adequate rehabilitation services.

“The U.S. aid package to Artsakh represents a small but smart investment in America’s strategic interest in a durable and democratic peace between Artsakh and Azerbaijan,” said ANCA Executive Director Aram Hamparian.  “We thank Senator Menendez for his principled opposition to the Administration’s heartless, senseless, reckless attack on this program, and join with him in encouraging his Senate colleagues to co-sign this urgent appeal.”

In March of this year, more than 75 U.S. Representatives signed a similar letter calling on House appropriators to fund Artsakh aid. Last year, 22 Senators and 89 Representatives cosigned bipartisan letters defending the USAID-funded HALO-Trust de-mining program in Artsakh- an ancient Christian land and proud democratic republic – struggling to survive on the frontiers of faith and freedom.

The text of the Menendez letter is below and available at:
http://anca.org/assets/pdf/041420_Menendez_Karabakh_Demining.pdf