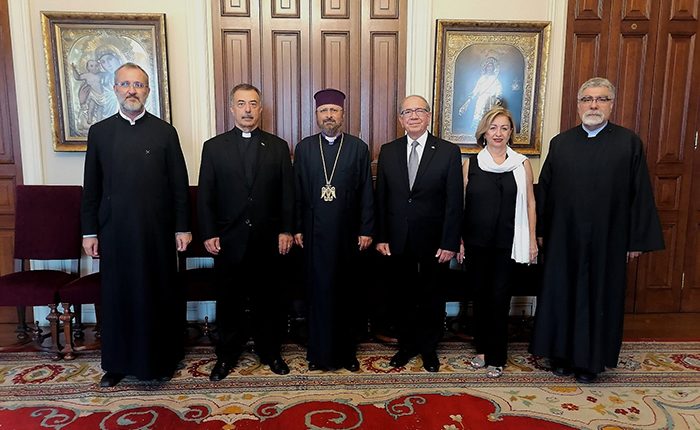 Following the Armenian Evangelical Church’s 175th Anniversary commemorative events in Armenia, Armenian Missionary Association of America Executive Director/CEO Zaven Khanjian, along with his wife Sona, traveled to Istanbul on Friday, July 16, 2022, for a short mission field visit where they were welcomed by Rev. Kirkor Ağabaloğlu, Pastor of the Armenian Evangelical Church in Gedikpaşa.

On Sunday, July 17, Mr. Khanjian participated in the Worship Service of the Armenian Evangelical Church in Gedikpaşa, and shared a message in Armenian while Rev. Ağabaloğlu, translated to Turkish. The message was based on Matthew 5:14-16, “You are the light of the world.”

On Monday, July 18, Mr. Khanjian with his wife Sona, and accompanied by Rev. Ağabaloğlu, visited the Patriarchate of Istanbul where they were received by His Eminence Archbishop Sahag II Mashalian, Armenian Patriarch of Constantinople.

The guests congratulated His Eminence on his election as the Patriarch of Constantinople. Mr. Khanjian spoke about the celebratory events of the 175th Anniversary of the Armenian Evangelical Church held in Yerevan and remembered with gratitude the presence of Archbishop Nathan Hovhannisian, who delivered the congratulatory message of His Holiness Karekin II Catholicos of All Armenians. Mr. Khanjian also thanked the Patriarch for his message on the same occasion.

His Eminence once again congratulated the 175th Anniversary of the Armenian Evangelical Church and emphasized the importance of preaching the Holy Bible in our times, as people sometimes have a negative attitude toward the Bible. He also emphasized the need to continue living our Christian faith by following the example of our grandfathers who experienced miracles with faith.

Mr. Khanjian referred to the reconstruction project of Camp Armen in Tuzla and expressed the desire of His Eminence’s moral support and blessing. His Eminence emphasized that the rightful owner of the institution is the Armenian Evangelical Community and, since it will be used by members of the Armenian community without religious discrimination, the work done would be of interest to the Patriarchal See and the Armenian Catholic Archdiocese. He also stated that he gave instructions for fundraising, and engagement in future plans.

Mr. Khanjian expressed his satisfaction that an inter-community understanding was formed for the realization of such a goal. He also emphasized that there were healthy inter-church relations in Istanbul, the result of which was the book about the Basic Principles of Christianity published in Turkish, Armenian, and English languages, the like of which has never been seen before. His Eminence gave copies of these books to the guests, as well as copies of his authored book “Yergu Ukhtavor” (Two Pilgrims). The guests expressed their gratitude for the hospitality and dialogue and bid farewell to His Eminence.

Matters relating to the Armenian community in Istanbul and the region were topics of discussion. Archbishop Zékiyan expressed support for the reconstruction of Camp Armen in Tuzla and affirmed the Church’s inclination to engage in the project. The guests thanked the Archbishop for welcoming them with a warm reception.

On July 18, Mr. and Mrs. Khanjian also visited the Hrant Dink School located at the Armenian Evangelical Church of Gedikpaşa in Istanbul. They interacted with the students in grades K-9 who presented a special performance of recitations and songs. It was a moving experience to see this island, a ghetto of national identity. These children and their school are equivalent to the “Youth Home of Istanbul” – children who are ‘cast out’ of the system, but warmly embraced by our Church in Gedikpaşa supported by the AMAA, where they come to know, learn, and realize their national identity, origin, and Christian faith.

On July 19, his last day in Istanbul, Mr. Khanjian along with his wife, Rev. Ağabaloğlu, Hrant Dink School children, teachers, and staff, as well as members of the Camp Armen Building Committee, representatives of the three Armenian denominations, and representatives of the Gedikpaşa Municipal Council visited Camp Armen. A bus was provided by the Municipal Council who invited the guests to share a meal with them following the visit. At the Camp, they reminisced Camp Armen and the two Hrants – Guzelian and Dink  6  and pledged to realize the dream of rebuilding the Camp for the youth and young adults of the community without discrimination. Turkish newspaper and TV reporters met the guests at the Camp and interviewed them.

“It was a very rewarding experience to embrace the legacy of Camp Armen, its heroes and heroines and the promise of a new community camp which will perpetuate that legacy and bring forth the promise of a new faithful generation of youth in Istanbul. AMAA, holding hands with the Armenian Apostolic and Catholic Churches, vows to support the rebuilding of the new camp for the benefit of community youth and young adults,” said Mr. Khanjian.