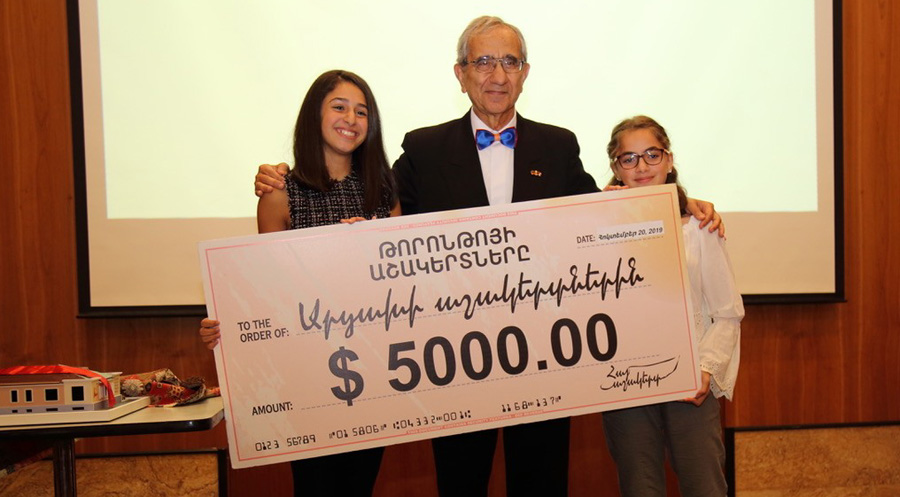 October 21, 2019, Toronto, ON – $880,000 Canadian ($670,000 USD) was raised at the annual Hayastan Foundation Toronto banquet held at the Armenian Community  Centre, as well as by the early major donations throughout the year. Some 360 supporters, including a large number of university students, attended the banquet. The annual event, which was organized under the auspices of the Embassy of Armenia in Canada, was dedicated to the 27th Anniversary and the kick-off of the 95th project of the Hayastan Foundation Toronto. However, thanks to the large amount of funds raised the Foundation will start two more projects, bringing the total to 97, which will be implemented in 2020.

The national anthems of Canada, Armenia and Artsakh were performed by soprano Armenia Sarkissian, followed by opening remarks of M.C. Tenny Nigoghossian, who very accurately described the tangible work done by the Foundation, in the Fatherland over decades, was also a service to humanity overall. Followed by an address by H.E. Anahit Harutyunyan, the newly appointed ambassador of the Republic of Armenia to Canada, who stressed the key role the Foundation has played in Armenia and Artsakh since the independence of both republics as well as Toronto’s role which has been much more active compared to the other centres around the world. As the cultural program, “Tevani” ensemble consisting of five singers, Mineh Satourian, Tvin Katerjian, Levon Karagulian, Toros Maydosian, and Sevag Haroutunian under the direction of Hripsime Tovmasyan, performed popular songs : Hayastan, Mer Sireli Yerevan, Qareri Amrots and Hayastan im Chqnagh, cheering up the audience. 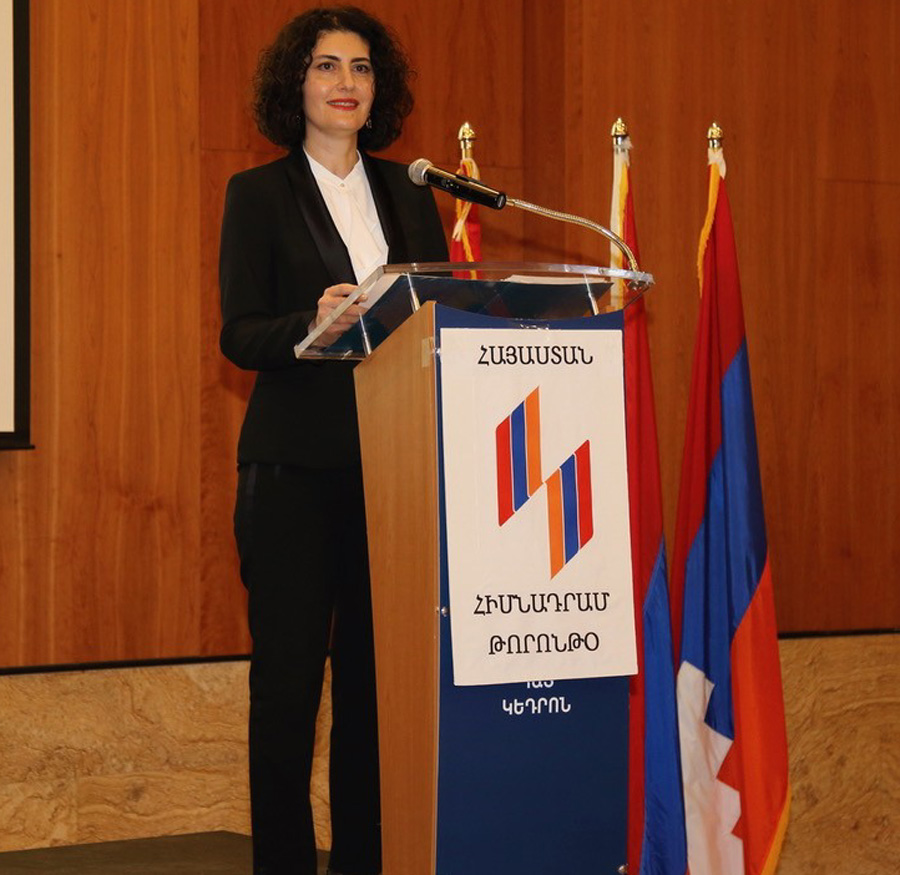 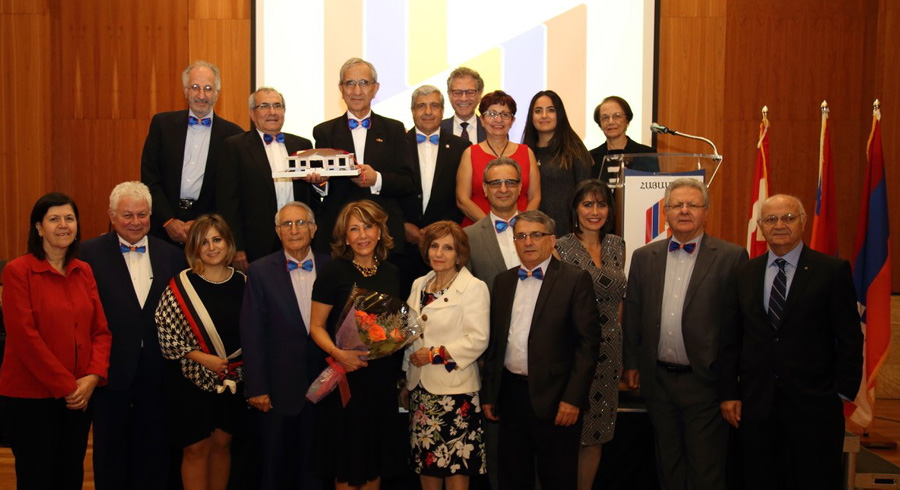 After dinner, Migirdic Migirdicyan, Chair of the Foundation, gave a detailed slide and video presentation of the organization’s most recent projects, which had made the organization’s past year highly productive, bringing the total number of the projects to 94, since its inception.  These included the completion of the school for the Ughdasar village; the ‘Life Centre’ for the Khntsoristan village, four irrigation wells and distribution systems for the villages of Martuni and the construction of the outside sports fields for the newly renovated school at Nalbantyan village.

In addition to the completed projects, listed above, Migirdicyan covered the details of the projects which are under construction; 14 houses and a Medical Centre for the Nalbantyan village, and a drinking water network for the village of Ughdasar. All these projects are expected to be completed by the Summer of 2020.

After the project presentation, the key-note speaker of the banquet Mrs. Maria Mehranian, the Chair of Armenia Fund USA, was introduced, who had come specifically for this event from Los Angeles. Mrs. Mehranian gave an eloquent speech emphasizing the role that the Fund has played in the lives of our sisters and brothers in the Homeland, by completing over one thousand projects by the donations coming from all over the world. The mission to enhance the infrastructure of Armenia and Artsakh will continue, added Mrs. Mehranian.

The fund-raising portion of the evening was kicked off by the presentation of a $5,000 cheque by two Toronto area students, Tenny Moushian, from ARS and Lily Tadevossian from Beverly Glen schools, who had raised funds at their schools together with other students of Toronto area Armenian schools.

The biggest surprise of the evening was the $200,000 CAD donation made by internationally acclaimed conductor Peter Oundjian, in order to undertake a major renovation at the Daniel Ghazarian Music School, in Shushi. Maestro Oundjian was the key-note speaker and the honouree of the Foundation’s banquet in 2017. 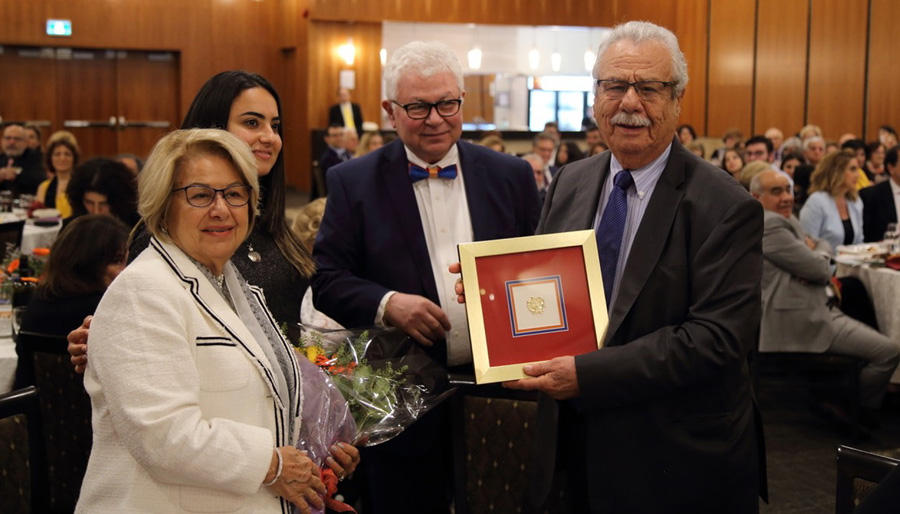 Thanks to a generous donation by Sarkis Yacoubian, a longtime supporter of the Foundation, students from local universities were attending the event for free.

Taniel Sarkissian and Yeto Balian two members from the community had visited Hayastan and Artsakh last summer and they shared their joy and enthusiasm while visiting the schools and the community centres that Toronto had built,

Closing the program, Migirdicyan thanked all the donors, specifically the Nalbandian Family, who have been the largest donor of the Hayastan Foundation Toronto, were presented a gold coat of arms of Armenia, prepared by Aram Isnar, a member of the Toronto committee, and told the audience that thanks to the money raised during this banquet and throughout the year, Toronto will build a new school for the village of Badara, renovate the Daniel Ghazarian Music Academy and a house for a multi-children and needy family.

The fundraising will continue for the rest of the year.