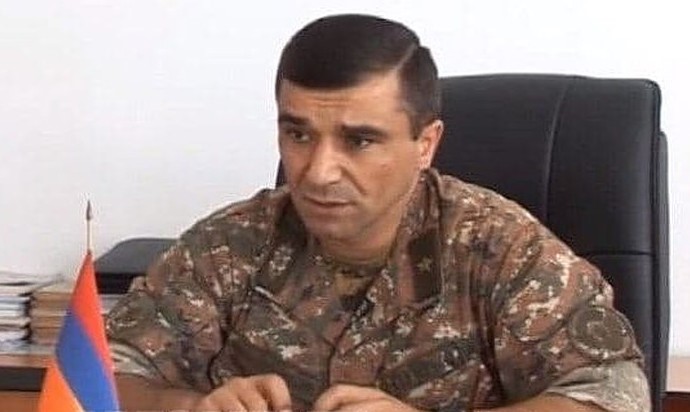 (Panarmenian) – Mikael Arzumanyan, who was appointed commander of the Nagorno-Karabakh Defense Army during the 44-day war, has been detained on charges of negligence, the Investigative Committee of Armenia reports.

According to the Committee, during martial law declared immediately after the war started in the fall of 2020, specifically from October 30 to November 9, Lieutenant General Arzumanyan, while organizing the defense of the city of Shushi and adjacent areas, showed negligent attitude to his official duties by non-fulfillment and improper fulfillment, which resulted in “grave consequences: as a result of this, the enemy’s armed forces took control of the city of Shushi and its environs, and our units suffered deaths and injuries.”

The Investigative Committee maintains that at the time Arzumanyan was responsible for the readiness and training of the troops, as well as for the successful fulfillment of the tasks assigned to the troops. However, in the course of organizing the defense of Shushi and the surrounding areas, he “did not ensure the effective use of military capabilities of the troops and the successful completion of tasks assigned within the established time frame, did not control the implementation of the said tasks and did not provide the necessary assistance, did not show firmness and decisiveness in the implementation of the decisions made, did not respond promptly and flexibly to changes in the situation, did not ensure stability, continuity and efficiency of the application troops, harmonious and full-fledged command.”

In particular, according to a the Investigative Committee, the lieutenant general did not give an order to deploy troops on an unguarded section of the defensive line of districts adjacent to Shushi, nor did he control the transfer of information between units.

On October 31, 2020, he did not ensure adequate defense on one of the sections of the font, as well as on the Shushi-Lisagor highway, despite the fact that since October 27-28 he had at his disposal a special rifle platoon of 95 people, as well as two separate battalions of 365 fighters who at that time were not involved in combat missions, the statement says.

In addition, the statement adds, until November 6, 2020, the operational reports signed by Arzumanyan indicated that combat missions continue to be carried out, and that the situation remains under control, despite the fact that separate groups of the enemy had entered Shushi on November 5.