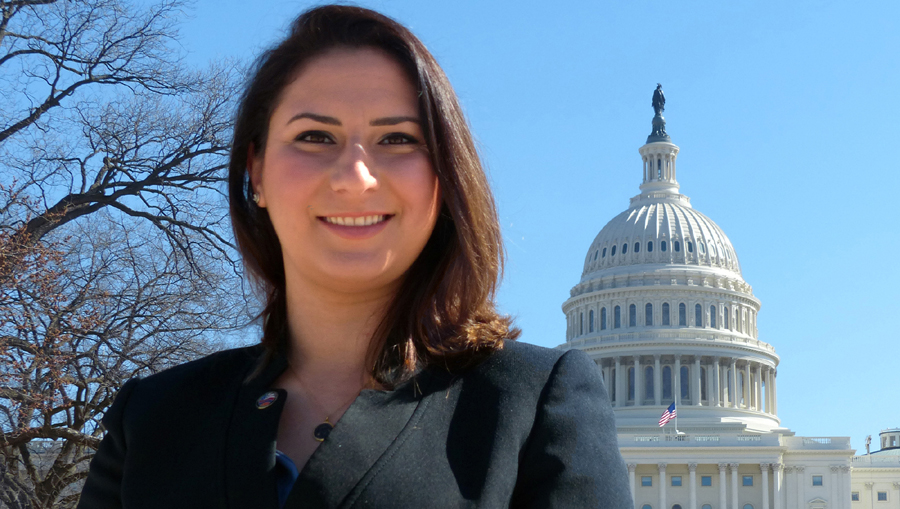 WASHINGTON, DC – Continued Artsakh (Nagorno Karabakh) demining and rehabilitation assistance and support for the implementation of the Royce-Engel proposal to deploy gunfire locators along the line-of-contact were key components of the Armenian National Committee of America’s (ANCA) testimony,  submitted earlier today to the U.S. House panel drafting the Fiscal Year 2021 foreign aid bill.  The request for Artsakh aid was part of a broader $100 million targeted assistance package which would bolster U.S-Armenia economic and military partnerships and support for Armenia.

ANCA Government Affairs Director Tereza Yerimyan shared with appropriators how the ANCA’s proposals advance U.S. interests and suggested concise, draft legislative language for their consideration. She reaffirmed the ANCA’s commitment to Armenia’s aid-to-trade transition, asking Members of the Subcommittee to encourage the Trump Administration to make full use of the U.S.-Armenia Trade and Investment Framework Agreement (TIFA) and Economic Task Force, and, most urgently, to move forward with the long-overdue negotiation of a modern U.S. Armenia Double Tax Treaty.

Yerimyan opened her testimony to the House’s Appropriations Subcommittee on State-Foreign Operations by marking the 100th anniversary of U.S.-Armenia relations, noting that on April 23, 1920, President Woodrow Wilson – through a letter from Secretary of State Bainbridge Colby to the Representative of the Armenian Republic, Garegin Pasdermadjian – formally recognized the Republic of Armenia.

The full text of the ANCA’s submitted testimony is provided below. Similar testimony will be submitted for Senate consideration in upcoming weeks.

for the
Subcommittee on State, Foreign Operations, and Related Programs
Committee on Appropriations
United States House of Representatives

We want to share with the Subcommittee our special thanks this year, as we mark a century of U.S.-Armenia relations and celebrate this milestone in the enduring friendship of the American and Armenian peoples.

It was one hundred years ago, on April 23, 1920, that President Woodrow Wilson – through a letter from Secretary of State Bainbridge Colby to the Representative of the Armenian Republic, Garegin Pasdermadjian – formally recognized the Republic of Armenia.

This panel has played a vital role in strengthening Armenia’s independence and fostering bilateral U.S.-Armenia ties in the years since Armenia reestablished her independence in 1991 after decades of Soviet tyranny – meeting humanitarian needs, providing technical assistance, supporting Armenia’s aid-to-trade transition, and investing in a durable and democratic peace between Nagorno Karabakh (Artsakh) and Azerbaijan.

Our specific requests related to the FY21 State, Foreign Operations, and Related Programs bill are for the following three provisions:

— Support Nagorno Karabakh-based regional rehabilitation services for survivors of landmine injuries and other individuals with physical and cognitive disabilities.

The U.S. aid program to Nagorno Karabakh may require only a small expenditure, but it represents a major American investment in peace.

Since Fiscal Year 1998, direct U.S. aid to Nagorno Karabakh has provided the people of Nagorno Karabakh with maternal health care, clean drinking water, and life-saving demining by the HALO Trust. Continued aid is needed to complete demining and meet the desperate needs for regional rehabilitation services – such as those provided by the Lady Cox Rehabilitation Center – for infants, children and adults with physical and cognitive disabilities – including those injured by landmines and unexploded ordnance.

As you may recall, in August of last year, in response to indications that the Administration was set to cut Nagorno Karabakh funding, 22 Senators and 89 Representatives co-signed bipartisan letters defending the USAID-funded HALO Trust demining program. Copies of these letters were sent to this Subcommittee.

While the exact percentage of territory requiring clearance remains uncertain, The HALO Trust’s village-by-village resurvey has already identified 1.8 million square meters of additional contamination in the highly populated Martakert region, a figure that will certainly increase as the re-survey continues. All told, 385 people have been killed or injured by landmines or other explosives in Nagorno Karabakh since 1995, including several HALO trust employees in just the past few years.

In the wake of last summer’s U.S. House passage of the Chu Amendment to the National Defense Authorization Action, we also encourage the panel to support funding for implementation of the Royce-Engel peace proposals, particularly their call for the deployment of OSCE-monitored, advanced gunfire locator systems to determine the source of attacks along the line of contact.

Of the funds appropriated by this Act, not less than $90,000,000 shall be made available for assistance for Armenia.

Armenia – a Christian nation deeply rooted in Western democratic values – has, despite the crushing economic impact of Turkish and Azerbaijani blockades, stepped forward as an ally and partner for the United States on a broad array of complex regional challenges.  The Armenian military has been among the highest per capita providers of peacekeepers to U.S.-led deployments, including those in Afghanistan, Iraq, Lebanon, Kosovo, and Mali.

We commend the Subcommittee’s commitment to American Schools and Hospitals Abroad, and encourage continued support through this program for the American University of Armenia and the Armenian American Wellness Center.  We also ask the panel to prioritize supporting Armenia’s role as a regional safe haven for at-risk refugees.

We remain troubled that the Administration’s $100 million security package to Baku adds equipment, tactical abilities, and offensive capabilities to the Azerbaijani arsenal, while freeing up its own state resources for renewed cross-border action against Artsakh and Armenia. The Administration should either cease sending military aid to Baku or – in keeping with the principle of parity – start matching every dollar they send to Azerbaijan with another to Armenia.

As the Subcommittee considers issues related to Azerbaijan, we draw your attention to how its government has, in recent years, failed three key Congressional tests of its commitment to peace:

1) Azerbaijan continues to obstruct implementation of the bipartisan Royce-Engel accountability/peace proposals, which call on all parties to the Nagorno Karabakh conflict to agree to the withdrawal of snipers, heavy weapons, and new armaments, the addition of OSCE observers, and the deployment gunfire locator systems.

2) Azerbaijan has condemned the U.S.-Artsakh Travel and Communication Resolution (H.Res.190), a common-sense measure that seeks to open up channels of communication toward a peaceful resolution.

3) Azerbaijan remains a recipient of substantial U.S. security aid, even as it continues to initiate cross-border attacks against both Nagorno Karabakh and Armenia, contrary to the spirit and letter of Section 907 of the FREEDOM Support Act.

In closing, we would like to emphasize, once again, our appreciation for this Subcommittee’s leadership in Armenia’s aid-to-trade transition.  In this spirit we welcomed the Administration’s recent upgrade of annual U.S.-Armenia Economic Task Force meetings to a U.S.-Armenia Strategic Dialogue. The time has come for a long-overdue negotiation toward a modern U.S.-Armenia Double Tax Treaty, a bilateral Social Security Totalization Agreement, and debt-forgiveness in return for the reforestation of Armenia.

The ANCA, as always, thanks you for your leadership and looks forward to working with the Subcommittee to strengthen the U.S.-Armenia alliance, promote regional stability, and advance American interests and our shared democratic values.