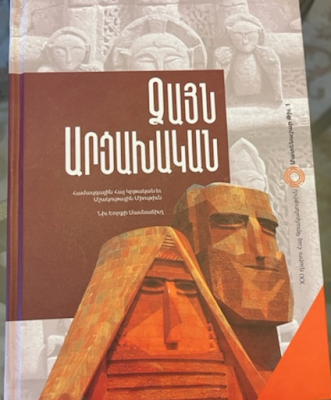 I received from Dr. Herand Markarian the first volume of a sequel that aims to capture within the covers of its volumes the 21st century Armenian literary voice.

The project is the brainchild of the NY Hamazkayin Chapter and is spearheaded by Herand Markarian. The book I received is titled “Artsakh Voice” (Tsayn Artsakhian) and is the first volume of the intended sequel.

The objective of the sequel is to have a collection of writings from the “four corners” of the world that is Armenian in the 21st century. The deadline is to have the submissions collected on time so that the sequels is published by 2025. The submitted literary pieces must not be published anywhere else before. The submissions for inclusion in the sequel need to be a creative literary work and should not entail translation, political analysis, historical review, and be analytical or a memorial and in  a distinct dialect.

The sequel is intended to consist of 9 volumes, as follows:

Volume 2: Abkhazia, where there is an Armenian Writers Unions’, Belarus, Ukraine, Russia and Georgia. The so-called “the inner Diaspora”.

Note: The submissions from Armenia are meant to  be by emerging writers, between the ages of 18 to 40.

The first volume I received is in hard cover. Seven hundred copies of which were printed in Yerevan in 2021, in a very good quality print. The Association of Artsakh Writers has collaborated to bring this volume to fruition. It is 481 pages long. Forty-eight writers from Artsakh have pieces of their literary works, either in prose or in poetry, including the literary works from 8 deceased Artsakh writers. Along with the pen, these writers have  also resorted to the rifle for reasons we know all too well.  It was fitting that their literary works marshal the 21st century Armenian literary voice.

To convey the authenticity of the Armenian literary voice, Dr. Herand Markarian has ruled that the submissions will be not reviewed by literary critics to render a judgement on the literary merit of a submission. The submissions will be published as is to the capture and preserve the authenticity of  the Armenian literary voice in the mosaic that is the Armenian world in the first quarter of the 21st century. Herand’s ruling reminded of my translation of one of Serop Yeretsian’s postings on his Facebook page, titling it “What is Literature?” Serop Yeretzian, was a writer in his own right and an insatiable lover of Armenian literature. He passed away a few months after that posting, on July 10,  2016. (http://vhapelian.blogspot.com/2020/02/what-is-literature.html)

The second volume of the sequel is in preparation. It  is called “Northern Voice” (Tsayn Husisyan). The editor of the volume is Armen Avanesyan, a doctoral candidate in literature and the director of the Diaspora Department of the National Academy of Sciences of Armenia.

It would not surprise me that as the project unfolds and is realized, a sequel of Diaspora Armenian literature in Latin, Arabic and in Cyrillic script may follow.

Although the project was initiated by the NY Hamazkayin Chapter, but it is driven through individual initiative and support. Donations are received under four categories. The sponsors (Հովաւանաւորող) are donors of $5000. The name of the sponsor, along with the honoree, will appear on the first page of the volume. In case of Tsayn Husisyan, the sponsor has preferred to remain anonymous and has requested his donation in anonymity be noted in the end of the book.

The second category is as benefactor (Բարերար) for donors of $1000. The name of the benefactor along with the honoree will be acknowledged on the second page of the volume.

It should be noted that the committee Herand Markarian heads, has transmitted , through the Artsakh Writers’ Union, an honorarium to each of the Artsakh writers who had  a piece of their literary works submitted for publication in the first –  “Artsakh Voice” (Tsayn Artsakhian) – volume

Dr. Herand Markarian has undertaken coordinating a monumental task. He may be reached by calling him at 845-300-8445 or emailing at hmarkarian@yahoo.com, for submitting articles and for financial assistance to help bring the project to fruition.