Over 65 U.S. House members call for $100 million in U.S. aid for Artsakh and Armenia 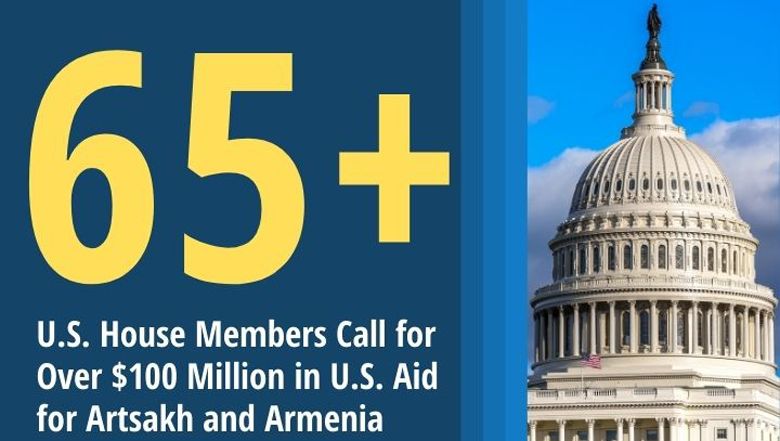 A bipartisan group of over 65 U.S. House members joined in the Congressional Armenian Caucus request for the House Appropriations to allocate over $100 million in U.S. aid to Armenia and Artsakh following Turkey and Azerbaijan’s devastating attacks last year, the Armenian National Committee of America (ANCA) reported.

“We want to thank Armenian Caucus leaders and Congressional cosigners from across the U.S. for supporting U.S. re-engagement through robust U.S. assistance to Artsakh, an immediate cut-off in all U.S. aid to Azerbaijan, and strong support for the sovereignty of Armenia as a pillar of regional security architecture,” said ANCA Government Affairs Director Tereza Yerimyan. “We look forward to working closely with House and Senate appropriators to ensure maximum funding reaches Armenians displaced by Turkish and Azerbaijani aggression, as Artsakh rebuilds from the devastating war.”

“The United States is uniquely positioned to help Armenia that has been shaken by last year’s war in Artsakh and the resulting uncertainty. Providing significant economic assistance to Armenia will help make its people more secure, bolster its democracy, help sustain economic development, stabilize its civil society, and aid its response to the COVID-19 pandemic and, most urgently, alleviate the ongoing humanitarian crisis in Artsakh,” said Congressional Armenian Caucus Co-Chair Frank Pallone (D-NJ), who along with Co-Chair Jackie Speier (D-CA) and Vice-Chair Adam Schiff (D-CA), led the effort.

In a letter to their Congressional colleagues, Reps. Pallone, Speier, and Schiff  wrote: “The below requests for Armenia and the Republic of Artsakh in the Fiscal Year 2022 State, Foreign Operations and Related Programs appropriations bill are critical for assisting the country in helping to make its people more secure, bolster its democracy and sustainable economic development, stabilize its civil society, aid its response to the COVID-19 pandemic and, most urgently, alleviate the ongoing humanitarian crisis in Artsakh,” which included the following budgetary requests:

— $100 million for economic, governance, rule of law, and security assistance to Armenia through State Department and USAID accounts.

— The suspension of all U.S. security assistance for Azerbaijan until it has been verified to have ceased all attacks against Armenia and Artsakh.