‘We must unite around not only slogans, but the future we want to build,’ Canada’s PM Justin Trudeau says in Yerevan summit 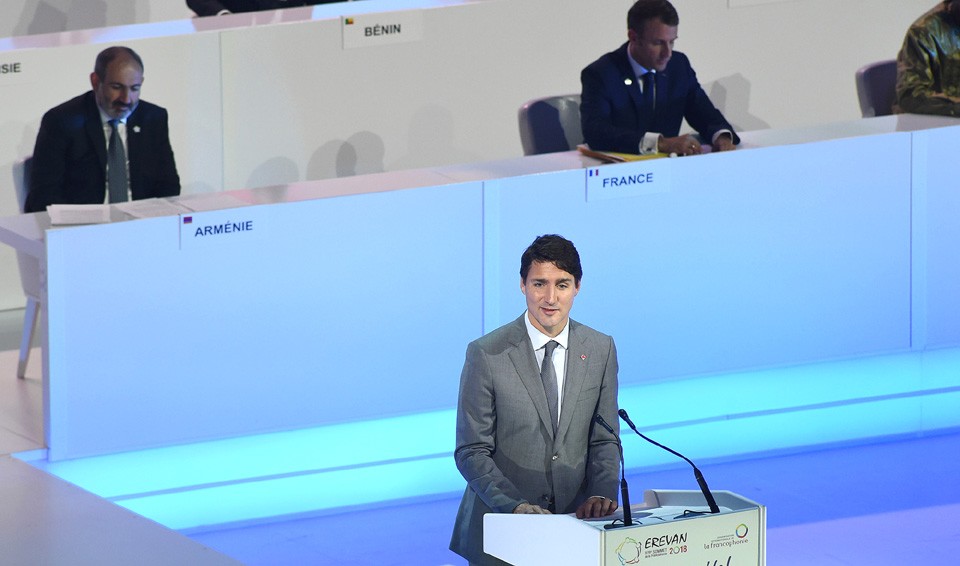 ARMENPRESS. The Francophonie Organization is an arena where states can listen to each other, and the country is a full member of the arena – be it a 99 million or 9 million population country, Canada’s Prime Minister Justin Trudeau said in his remarks at the XVII summit of the International Organization of La Francophonie in Yerevan, Armenia.

“Together we were able to create a dimension where we are guided with mutual respect, where our states can develop, listen to each other, and all this in French language,” he said. “We must unite not only around our speeches, but also the future which we want to build. This summit is taking place at a very important time. We are obliged to reconsider our Living Together slogan, because we can overcome challenges only in the dimension of the Living Together slogan,” he said.

Trudeau highlighted the involvement of African countries in the organization.

“Africa today is considered the moving force of La Francophonie, taking into account the population and pace of development,” he said.

Trudeau also saluted Charles Aznavour, noting that he loved the singer very much. “The entire Francophone world united with an homage for Charles Aznavour. Charles saw all nuances of our language and cultures in detail. I see the same here also,” he said.

Delegations from 84 countries and leaders of 38 countries have arrived to take part in the summit.

Armenia will assume chairmanship of the La Francophonie from Madagascar.

The International Organisation of La Francophonie was created in 1970. Its mission is to embody the active solidarity between its 84 member states and governments (58 members and 26 observers), which together represent over one-third of the United Nations’ member states and account for a population of over 900 million people, including 274 million French speakers.