The overall situation can be considered positive, battles for Shushi continue – Armenia MoD 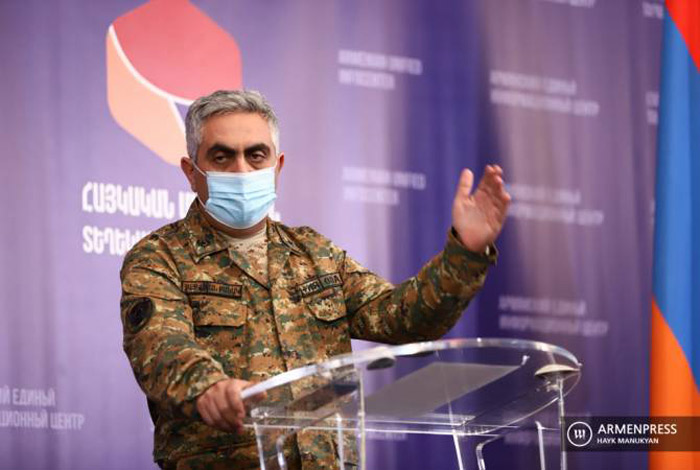 Armradio – Last night and today fighting continued in different directions on the front. The fighting was quite intense, official representative of Armenia’s Ministry of Defense Artsrun Hovhannisyan told a daily briefing today.

“In the north, the Azerbaijani troops, mainly with the support of small tactical groups, tried to attack our positions with artillery fire, but were repulsed, suffering losses,” Hovhannisyan said.

After some success in the direction of Martuni early in the morning, our army managed to stop the enemy, he said.

“In the city of Shushi, in the surrounding areas, under the fences, on the roads leading to Shushi, fierce battles took place throughout the day. Fighting is still going on, although the intensity has significantly weakened,” Artsrun Hovhannisyan added.

According to him, the Azerbaijani armed forces tried several times to break into Berdzor, probably trying to help their units fighting in Shushi. However, suffering significant losses, they were thrown back and fled.

“At the moment the battles are going on, the overall situation can be considered quite positive. Our troops manage to prevent the enemy forces from advancing in any direction, but the battles are in progress. The battle for Shushi continues,” Hovhannisyan stated.

“let’ wait for the end of the battle. I’m confident our troops will finish it with glory, and we will win. Let’s trust our troops and wait,” he added.