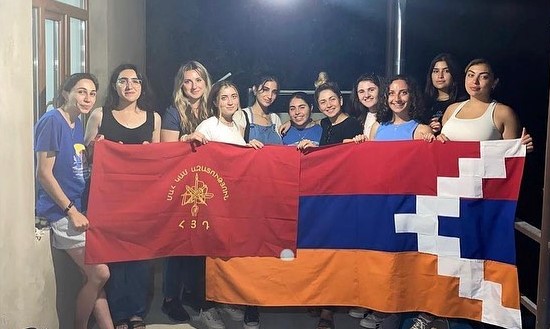 The Armenian Youth Federation (AYF) Internship in Artsakh is a six-week Western United States initiative with the goal of strengthening ties between young diasporan Armenians and Artsakh. Interns chose their workplace while living in the heart of our nation. They were able to attain a 360-degree experience by interning in Artsakh while also participating in excursions and spending quality time with local AYF junior and senior members.

Areni Hamparian (Western United States), Hasmik Burushyan (Western United States), Galy Jackmakjian (Eastern United States), and Nare Nersesyan (Moscow, Russia) — four bright and passionate interns from three different regions of the world — commenced this year’s AYF Internship in Artsakh program by making their way from Yerevan to Stepanakert on Saturday, July 2nd. They started their respective internships the following Monday. Each intern was placed in their requested field and was expected to work a total of 30 hours a week. Interns were placed in the Armenian National Committee (ANC) of Artsakh, the National Assembly of the Republic of Artsakh, the Hamazkayin office and the Armenian Relief Society (ARS) “Sosseh” Kindergarten.

After work and on weekends, interns were never left scavenging for activities or things to do. Rather, the group of four was almost always busy exploring every crevice of our homeland. They traveled to Amaras Monastery, the Lion’s Cave in Martakert, Nigol Douman’s home, the Askeran fortress, the Mamig and Babig monument for night picnics and Artsakh tea prepared from a samovar. On the weekends, interns visited Artsakh’s border villages of Marduni, Askeran and Martakert, including Vank, Avdour and Ashan. Interns conversed with villagers in each region, learning more about each person’s story, family history and fierce resistance against the forces that try to betray and diminish the Armenian people and nation. In effect, during these visits, our interns would spend much time in our heavenly and unshakable mountains, reflecting on the fedayees (Armenian freedom fighters) and historic Armenians who roamed and kept the very same soil we found ourselves on.

The group crossed paths with AYF Youth Corps participants, who made their way to Artsakh for two weeks for educational and lively camps for AYF Juniors in Stepanakert. Using these jampar programs as inspiration, our four interns, with the help of the incredible AYF Artsakh members, organized a two-day camp for the badanees of Vank, Martakert. Using the local school of Vank as a base, the interns opened the camp with the singing of the Armenian Revolutionary Federation (ARF) anthem and the national anthems of Armenia and Artsakh. Each day began with an Armenian history educational, in which the badanees learned about important figures who have played a role in the salvation of our homeland. Later on, the juniors learned revolutionary songs (“Kini Lits” and “Bank Ottoman”), cultural dances (Michigan Hop and Tsaghkadzori bar), and played fun games like steal the bacon and volleyball. Lunch was served, songs were sung, games continued as day one was brought to a close. On Sunday, the group planned a series of relay games. From “Egg on a Spoon” to “Chubby Bunny” (the player to fit the most amount of marshmallows in their mouth wins), the juniors cracked eggs and jokes together, bringing smiles to the faces of the badanees of Vank.

“Seeing these kids laugh, make new friends and become familiar with Dashnaktsutyun and our history, it means the world to us,” said Galy Jackmakjian, a member of the AYF-YOARF Eastern Region Washington DC “Ani” Chapter. “These Juniors wait all year to see who their vareeches will be that summer. They feel that someone cares enough to travel to Artsakh from far corners of the diluted Armenian nation, to travel and to devote to them their undivided attention and care. These kids, they change your meaning for life and your purpose forever, and you have the honor to stay in their hearts and minds for years to come.”

Jackmakjian stumbled upon this internship opportunity accidentally. She had first applied for the Eastern Region AYF Internship in Armenia, which spends only five days in Artsakh. Jackmakjian was placed at the ARS “Soseh” Kindergarten in Stepanakert and also spent many hours working with the Homenetmen scouts of Artsakh, the Hamazkayin office and Hai Tahd.

The ARS “Soseh” Kindergarten has four classes with approximately 20 students (ages three to five years old) in each class. Most of the students are either children of martyred heroes and/or displaced from their homes. These children attend school for eight hours a day, five days a week, where they learn, play, eat and rest. Jackmakjian shadowed Anna Atayan and received hands-on experience in early childhood education. She says she loved bonding with the students and staff who have changed her views of life.

“The children I worked with have seen more than I will ever see as a 22-year-old,” she reflected. “The staff have experienced three wars and have lost many near and dear along the way; however, I have never met a more resilient and inspiring group of people, who show up every day, putting their troubles aside to ensure the coming generation of Artsakhtsis can spend at least eight hours from each day of their tiny lives, away from worries of their reality and full of love and care. I bow down to the staff of ARS ‘Soseh’ Kindergarten.” Inspired, Jackmakjian leaves Artsakh to return, settle and plant her roots in its priceless soil soon.

Areni Hamparian is a member of the AYF Western United States and co-chair of the AYF Internship of Artsakh council. She found herself participating in the program she helped plan this year. This was Hamparian’s fourth visit to Artsakh. She was placed at the newly-opened ANC of Artsakh office, where she helped strategize ways to bolster Hai Tahd in Artsakh.

“My experiences in the workplace as well as in the mountains of our holy Hairenik have brought new perspectives and a changed outlook on how to effectively serve our nation,” shared Hamparian. “Spending wonderful hours with AYF members in Artsakh has filled our hearts with much love and a true appreciation for the force that brings us all together – Dashnaktsutyun.”

Hamparian and her fellow interns were grateful to visit with and learn from dozens of villagers throughout the region. “We, the youth, the bearers of the Armenian future, have a responsibility to continue the work of our fedayees. We have a responsibility to carry the faith, hope and dedication of our ancestors through the centuries of Armenian history. I am truly grateful for the opportunity to spend six weeks in Artsakh, our Hairenik, working with our brothers and sisters, ungers and ungerouhis, to build a brighter future for our people,” said Hamparian.

Nare Nersesyan also worked in the ANC office in Artsakh. Currently living in Moscow but born and raised in Sisian in the province of Syunik, Nersesyan had been dreaming of visiting Artsakh. The Moscow State Humanities University student spent a lot of time reflecting on how she could help the beautiful mountainous land of Artsakh, but she didn’t expect how life-changing her experience in the homeland would be.

“When you set foot on this sacred ancestral land, you realize that no matter what you give it, it gives you much more valuable gifts every day: hope, toward the brightness of the coming day; will, thanks to which all the mistakes made will be corrected; and an inexhaustible stream of strength, which brings the children of this land even closer to building new victories,” she shared.

Nersesyan, who studies political science, discovered that her work with the ANC of Artsakh was related to her current major as she wrote many articles, conducted rigorous research and implemented various political analyses. She has a powerful message for the Armenian nation: “Come to Artsakh, join the proud mountains and strengthen this native land with your presence.”

Hasmik Burushyan fell in love with Artsakh in 2018, as a member of the AYF-WUS Youth Corps initiative. When the current chair of the AYF Western United States decided to return to her post-war homeland, she realized how much everything had changed. The grim reality of the situation has motivated her to help make an impact, because there is so much work to be done.

Burushyan says she believes in the power of the Diaspora and the absolute importance of Diasporans physically being in the homeland and with the people of Artsakh. “The diaspora has to join forces with the people of Artsakh to work together,” stressed Burushyan. “With it being my second coming to Artsakh, I am convinced of the importance of the effort coming from the diaspora, but it is more essential for us to be side by side with our comrades living in the homeland.”

We are beyond grateful to the AYF and ARF chapters in Artsakh for welcoming our interns with open arms and imbuing our group with knowledge, truth and pivotal lessons. We look forward to returning to Artsakh in the coming year and working to effectively and smartly strengthen our Hairenik – together. “Artsakh is home, the truest paternal home for an Armenian, regardless of where he came from,” concluded Nersesyan. “Even though the road home is a bit longer now, it is worth going. Isn’t it the overcoming of difficulties that gives value to our steps and gives meaning to our decisions?”