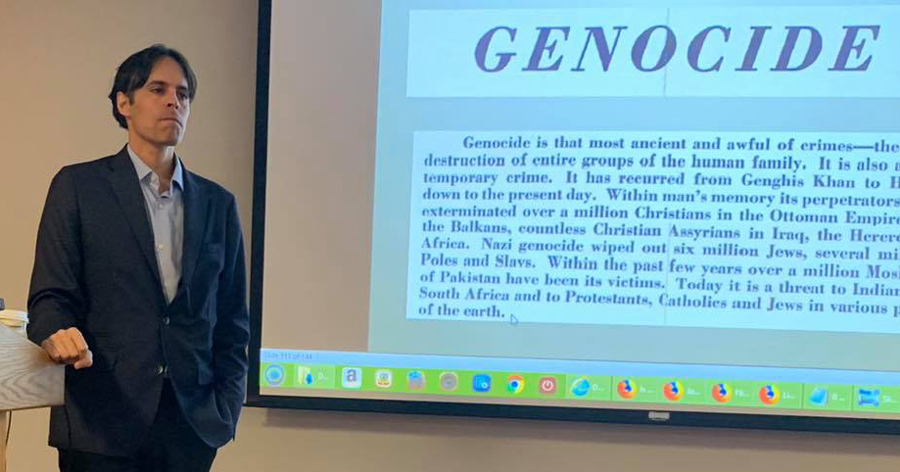 Assyrians and Armenians have lived near each other for thousands of years and shared similar trials and tribulations.

So as an Armenian American in an audience of about sixteen Assyrian Americans, I knew I was among compatriots.

The occasion was a talk by Prof. Hannibal Travis, titled “The Plight of Refugees and the Law of Genocide: Assyrians, Armenians, Greeks, and Yezidis,” on a rainy, blustery Saturday afternoon on October 27, 2018 at the Watertown Public Library in Watertown, MA.

The event was sponsored by the Assyrian American Association of Massachusetts (AAAM; Facebook.com/AssyrianAmericanAssociationOfMassachusetts).

The talk’s primary topic was the World War I era genocides — and previous massacres — of Christian Assyrians/Armenians/Greeks, as well as Yezidis, committed by Ottoman Turkey and allied Kurds.

Prof. Travis also discussed the ongoing victimization of Assyrians, Armenians, and Yezidis by Islamist jihadists and others in the current wars in Iraq and Syria.

The 14th century Turko-Mongol invasions of Timur/Tamerlane, said the speaker, had forced many Assyrians into the mountains of northern Mesopotamia (today’s southeastern Turkey) from their cities in the southern plains.

In 1843 in Hakkari (now in southeastern Turkey), perhaps 10,000 Assyrians were massacred and sold into slavery by Kurdish tribes and Ottoman forces.

The “Hamidian Massacres” of the mid-1890s — so named after Ottoman Sultan Abdul Hamid II — are usually thought to have had only Armenian victims.

Prof. Travis pointed out, however, that perhaps 25,000 Assyrians also fell victim to these massacres.

In the World War I era, an estimated 250,000 Assyrians were murdered by Ottoman Turkey and Kurdish irregulars in the Assyrian Genocide or “Seyfo,” which means “sword” in the Assyrian language.

In 1915, explained Travis, Assyrians made resistance stands, such as in Ayn-Wardo (in today’s southeastern Turkey), against Turkish troops and Kurdish brigands — similar to that period’s Armenian defense stands in Van and at Musa Dagh.

The Yezidis (or Yazidis) were also swept up in the 20th century genocides that engulfed Christians in the Turkish Empire.

In Iraq/Syria today, Yezidis often find themselves under siege by ISIS jihadists.

Most Yezidis regard themselves as a distinct ethno-religious group. They often speak the Indo-European language known as Kurmanji Kurdish. Their unique religion, Yazidism, combines some aspects of other major monotheistic religions.

He is the editor of the recently published The Assyrian Genocide: Cultural and Political Legacies.

His mother’s family was from the traditionally Assyrian regions of Hakkari and Urmia.

He explains that the name Hannibal is of Semitic origin and attested in Phoenician/Carthaginian history. It means “Mercy of Baal” where Baal is usually translated as “the Lord”.

Travis has previously spoken at events sponsored by such Armenian organizations as AGBU, Armenian Assembly of America, Centennial Project Foundation, and USC Institute of Armenian Studies.

I spoke to Ninos Hanna and Prof. Sargon George Donabed at this event.

Hanna is AAAM’s President and a communications and marketing professional.

David Boyajian is a freelance journalist. Many of his articles are archived at Armeniapedia.org/wiki/David_Boyajian.