International Conference: “The Rescue of Armenians in the Middle East 1915-1923” 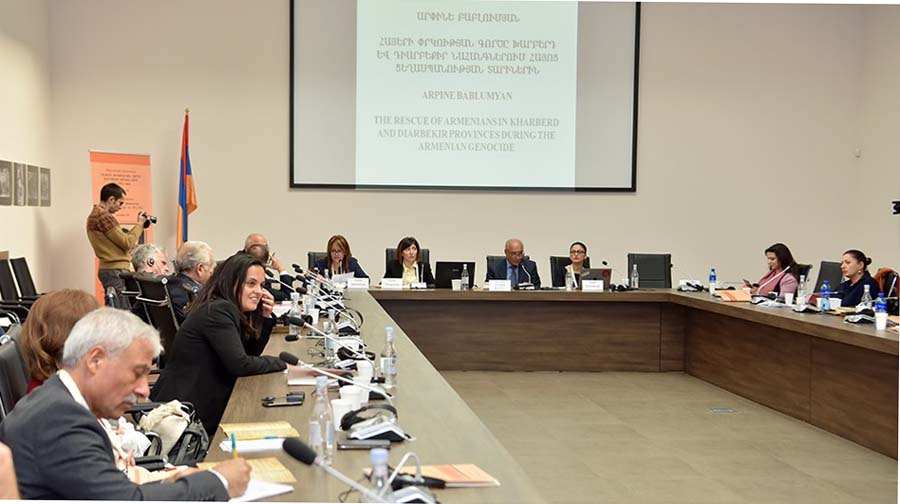 Yerevan, Armenia – On November 8-9, the Armenian Genocide Museum-Institute (AGMI), sponsored by the Armenian Missionary Association of America (AMAA), and with support of the Mother See of Holy Etchmiadzin, organized a two-day International Conference titled “The Rescue of Armenians in the Middle East 1915-1923.”

The Conference officially opened at the AGMI Conference Hall. Father Asoghik Karapetyan, a Representative of the Mother See of Holy Etchmiadzin and Director of Museums and Archives, conveyed greetings from His Holiness Karekin II, Catholicos of All Armenians. “We should always raise the question that humanity and self-sacrifice have been a guiding principle for Armenians in our lives today and at all times as an important assurance of national existence. Although our people have been brutally massacred in their Homeland, they were able with their unique ability of resurrection to continue to create and to build, and the role of the devotees is great in that process.”

In his remarks, AGMI Director Harutyun Marutyan mentioned that the idea of this Conference was born out of a bilateral collaboration between the AGMI and the AMAA. “The purpose of this Conference is to present the fate of those displaced due to the Armenian Genocide, and to highlight the activities of Armenian and international organizations and individuals who played a great role of rescuing Armenian refugees, particularly children and women.

“Why in 2019?” questioned Mr. Marutyan. “Because exactly 100 years ago the ‘One Armenian, One Gold’ movement started, when thousands of Armenian orphans were in captivity and on the brink of Islamization. Armenian intellectuals realized that the future of the Armenian nation is greatly dependent on these orphans and they need to do everything possible to save these children who will become the citizens of tomorrow’s Armenia.”

AMAA Executive Director/CEO Zaven Khanjian welcomed Conference participants with a video message where he said: “It is the irony of history that we are experiencing today. While we are here at the opening of this Conference, for the last seven years we have been witnessing new atrocities in Syria by the same brutal power whose victims today are the progeny of those rescued in the post Genocide era. The perpetrator and the crime have not rested. It is necessary to be watchful and to expect evil. Therefore, as a nation we must be ready for the task of salvage.”

Samvel Karabekyan, Advisor to the RA Ministry of Education and Science, and Raymond Harutyun Kevorkyan, Chairman of the AGMI Foundation Board of Trustees, also welcomed participants to the Conference.

On the first day of the Conference, the Exhibition titled “From National Unity to Revival,” exclusively featured Armenian contributions to the salvation of Genocide survivors. AGMI Academic Secretary Dr. Narine Margaryan considered this Exhibition unique and the success of various operations organized for the rescue of Armenian orphans was conditioned by their national and ideological unity. “In this work there were apostles, men who clearly understood the seriousness of the moment and were steadfast in their work. Some came in the form of donations, others gathered Armenians from the wilderness, and others took care of them in orphanages,” she said inviting the audience to be acquainted with the materials about these people and organizations.

Other themes throughout the Exhibition included the activities of Armenian religious institutions and other organizations – the Armenian General Benevolent Union, Armenian National Union, Armenian Orphans Care of Egypt, Armenian Organization of Mesopotamia, Armenian Red Cross, the works of Armenian Evangelicals and Catholics, as well as orphanages from the governments of the Republic of Armenian and the Armenian SSR. The Exhibition also included unique archival materials, such as documents, photos and exhibits mainly from the collections of the AGMI, and collections from the National Archives of Armenia, Yerevan History Museum and AGMI staff member Mihran Minasyan. Orphanage memories, which included photos, migration routes, orphanage items and handiwork items from the orphans, which until now were never seen, proved very interesting to those in attendance .

Director of the Armenian Studies Program in Modern and Classical Languages and Literature at the University of California, Northridge Dr. Vahram Shemmassian delivered a report about the pro-Armenian activities of Rev. Aharon Shirajian who forcibly rescued kidnapped Armenian women and children in Syria during the Armenian Genocide. Rev. Shirajian had been the Superintendent of the Karen Ephesus Shelter of Britain’s Friends of Armenian Organization and he continued the work of that organization beginning in 1922. Until 1933, Rev. Shirajian and his wife assisted women and girls who survived the massacres. As time and circumstances dictated, they gave the orphaned children new names, opened a school for them to learn languages, receive religious education and be re-Armenianized. They also took great responsibility to help the girls get married. They carefully chose suitable mates for them to form happy families and have good Armenian children.

The theme of AGMI Academic Secretary Dr. Narine Margaryan’s presentation was “The Armenian Orphanage in Aleppo from 1915 to 1924.”

Dr. Margaryan presented the history of the Armenian Orphanage, launched in July 1915, and the role of the institution in rescuing orphans. She detailed the activities of the Orphanage in the areas of education, health, finance, artisanship, caregiving, as well as the issues the Orphanage faced and how they were resolved. Dr. Margaryan also touched upon the regional political events of this period which had a direct impact on the Orphanage.

“The Armenian Orphanage in Aleppo started its activities on July 31, 1915 under the leadership of Rev. Aharon Shirajian who was born in Marash. He received his education at Central Turkey College in Aintab and attended the Marash Theological Seminary. In 1912 he went to Edinburgh to continue his theological studies. He witnessed the brutal politics of the Hamidian, Young Turk and Kemalist periods. He came to Aleppo after he was deported from Marash, where he founded the Orphanage. This was the period when the Ottoman Empire consistently pursued the policy of exterminating the Armenians. Doctor Assadour Altounian and his daughter, Nora Altounian, played an important role in the establishment of the Orphanage. They used their personal connections and tried to solve the health and wellbeing issues of the orphans.” 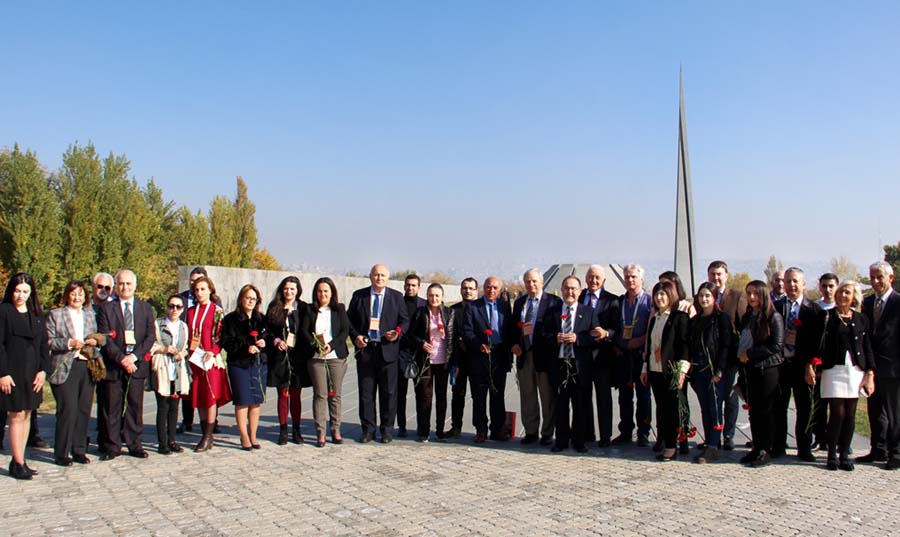 In January 1919, the 20-year-old GOCHNAG was renamed HAYASDANI GOCHNIAG. This renaming was related to the mission of the proclamation of the Republic of Armenia, the belief in the emergence of a new Armenia, and the mission of the newspaper to summon Armenian pilgrims to Armenia. The articles, reports and call for Armenian national sentiments published in HAYASDANI GOCHNAG gave their results. As a way of public advice, the GOCHNAG’s mission was to inspire Armenians with new vigor, new faith and dreams. In his report, Dr. Dakessian summarized editorials from the 1919 GOCHNAGS (over 150 editorials) and their main opinions.

Following the first session of the Conference, participants visited the Armenian Genocide Monument of Dzidzernagapert and laid flowers near the eternal flames.

The second day of the Conference was held at the KAREKIN I Educational Center of Mother See of Holy Etchmiadzin. Twenty-three scholars from Armenia, France, Germany, Lebanon and the United States addressed details of the rescue missions for those who survived the Genocide.

Researcher at Yerevan State University, Genocide Scholar Dr. Hilmar Kaiser’s report, “Religious Activities of the Protestants in the Ottoman Fourth Army from 1915 to 1917,” touched upon Evangelical figures such as Koundakjian, Mhudian, Haidostian, and Revs. Eskidjian and Shirajian, who undertook the task of rescuing those displaced by the Armenian Genocide in Hama and Aleppo. During these rescue missions, Evangelicals also suffered casualties.

Dr. Kaiser particularly remembered Araksya Jebejian and Beatrice Royer and was the only reporter who also touched upon Turkish individuals who opposed the massacres and helped the displaced. In particular, he presented the charitable actions and assistance provided to Armenians by the Ottoman Fourth Army. He told a noteworthy story of an Ottoman person who oversaw one of Aintab’s shelters. At the beginning of World War I, he expressed a desire to become a Christian and after the end of the War, he left the Army and Turkey with an Armenian woman and eventually lived in Syria in an Evangelical community.

Other participants of the Conference also presented the fates of the displaced, as a result of the Armenian Genocide, highlighting activities of additional Armenian and international organizations and individuals involved in the rescue mission of Armenian refugees, children and women.

At the conclusion of the Conference, Director of the AGMI Foundation Harutyun Marutyan summarized the work done and highly appreciated the fact that “if until now we have always emphasized the role of the foreigners in the rescue mission of the Armenians, this two-day Conference emphasized the role of Armenians in the rescue mission. Moreover, these Armenians were both individuals and large and small organizations, which in today’s terminology have taken on the role of the Ministry of Refugees and have accomplished great organizational work.”

The Conference also revealed many issues that still need to be researched. “The second century of the Armenian Genocide Study is commencing, and old questions require new answers. There are also new questions that require timely answers,” said Mr. Marutyan. He also mentioned that three international conferences and two exhibitions are planned for next year. “I would like to thank the AMAA and in particular Executive Director/CEO Zaven Khanjian and the Mother See of Holy Etchmiadzin for their support of this two-day Conference,” said Mr. Marutyan, who expressed hope that they would be ready to support their further plans.